Again, judicial activism had to rescue citizens from pandemic, why is it so always in India? 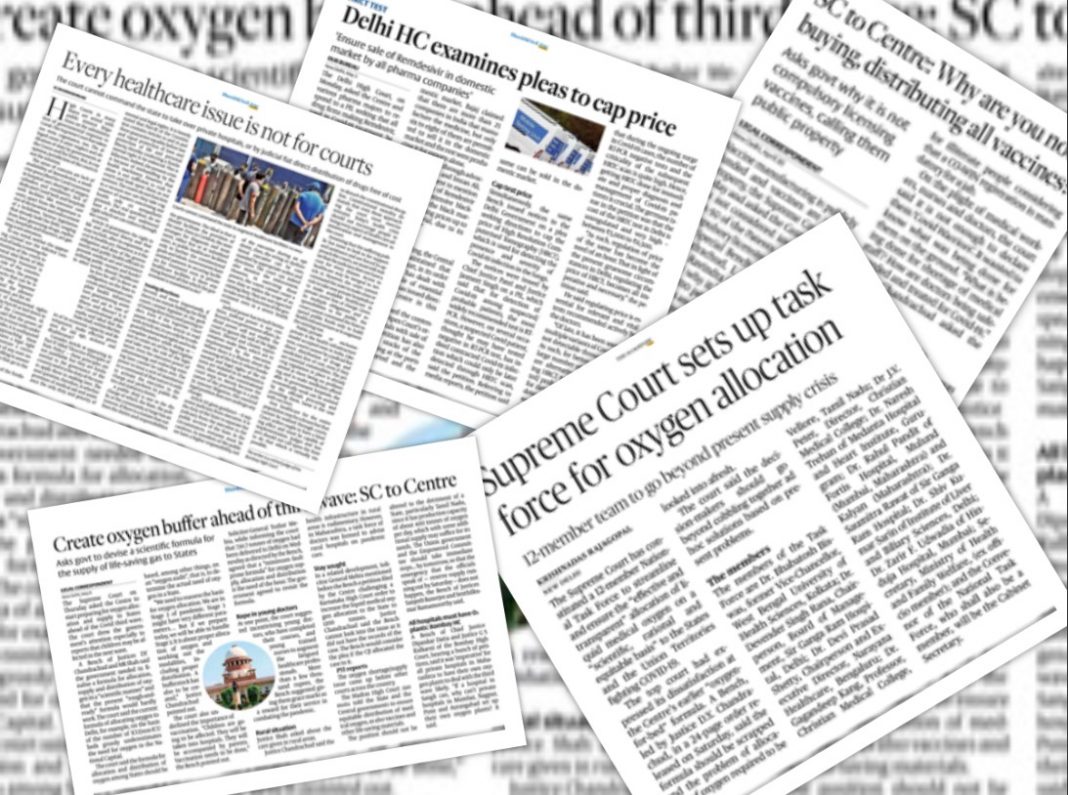 Judicial activism to again set in, as guardians, finally to rescue the citizens and to remind/ push the authorities to execute what they are supposed to do. There is no denying the fact that these are un-precedented times but it is also a fact that extra-ordinary situations require extra-ordinary solutions, if not then at least an attempt in real sense to provide extra-ordinary remedies. The citizens are not heartbroken that the requirements are not getting fulfilled because of paucity of resources but the real problem is the lack of complete will. It appears as if all authorities or at least the policy makers have already given up to the second wave. They have admitted the defeat before the defeat.

Let us first see, what the separation of powers, judicial review, judicial activism and the role played over the years by judiciary is in the immediately following parts of this article.

The term “separation of powers has been defined by many and at various places including numerous judicial pronouncements. But in general, the meaning of separation of power can be categorized into three features:

• Person forming a part of on organs should not form the part of other organs.

• One organ should not interfere with the functioning of the other organs.

• One organ should not exercise the function belonging to another organ.

“If the legislative and executive authorities are one institution, there will be no freedom. There won’t be any freedom anyway if the judiciary body is not separated from the legislature and executive”- Charles de Montesquieu

It was admittedly done as it is impossible for any of the organs to perform all the functions systematically and appropriately. So for the proper functioning of the powers, the powers are distributed among the legislature, executive and judiciary. Now let’s go into the further details of the functioning of each organ.

Main function of the legislature is to enact a law. Enacting a law expresses the will of the State and it also acts as the wain to the autonomy of the State. It is the basis for the functioning of executive and judiciary. Executives are responsible for implementing, carrying out or enforcing the will of the state as explicit by the constituent assembly and the legislature. The executive is the administrative head of the government. Judiciary has the responsibility is to apply the law framed by the legislature to individual cases by taking into consideration the principle of natural justice, fairness.

Judicial Review can be classified into three categories,1) Reviews of Legislative Actions, 2) Review of Judicial Decisions, and 3) Review of Administrative Action. Therefore, it is also the duty of judges to ensure that balance of power is maintained, to protect human rights, Fundamental Rights, and citizens’ rights of life and liberty.

Judicial Activism can be defined as a philosophy of judicial decision making whereby judges allow their personal views regarding a public policy instead of constitutionalism.

Moreover, the concept of Judicial Activism also faced certain criticisms. Firstly, it is often said that in the name of activism, judiciary often rewrites with personal opinions. Secondly, the Theory of Separation of Powers is overthrown. However, its importance lies with position accorded to institution as a place of hope for aggrieved persons.

There is only a thin line of separation between review and activism. While judicial review means to decide if the law/act is consistent with the Constitution, judicial activism is more of a behavioural concept of the judge concerned.  It is majorly based on public interest, speedy disposal of cases etc.

Out of well-known four pillars of democracy i.e. Legislature, Executive, judiciary and media, admittedly, two are caught un-aware or on wrong foot and the trouble became deepened when they refused even after disguise to come on right foot.

The fourth pillar is invisible in constitution but most visible on screen and on ground but miserably derailed by un-precedented pandemic. The TRP could have been increased if would have spread real picture or positivity.

For not all Media Houses but a few handful News channels, I would like to state that all day long only showing— hospitals full of patients, disadvantaged families, helpless families, roaming around, suffering from hunger, dying people, burning pyres–doesn’t do any good to us or give no new information at all!!!! What do you want to prove by spreading panic?

Creating so much fear that even a healthy person is getting sick. We all know that there is a pandemic going on, we also know that it is enough to say that there is no control over the situation – and nobody knows what’s the right decision !!Don’t break it- if you can’t boost our morale!!! Help to solve the problems, show interviews of recovered patients, Search and let us know where to find oxygen cylinder, Create a database of plasma donors, Tell me how many beds in which hospital are empty, Provide Ambulance Service Details, Encourage everyone to serve, Provide information about where and what benefits are available, Force people’s representatives to do social service instead of showing war games in studio, Give information on where and to find doctors without scary interviews of doctors. Please do your own duties as well. Let all of us come together and help each other in whatever way we can.

Hence, the third pillar i.e. Judiciary again proved not only strong to perform its functions during these testing times but also to motivate and re-energize the first two pillars of democracy. however, this is not the right time to take better care of fourth pillar so we are also not deliberating much on that.

This un-controlled, un-tapered, un-ending misery with which our countrymen, our governments and our medical infrastructure have encountered is as much a shock to us as to other countries.

The real problem was, at the cost of repeating it, un-aligned actions amongst the govt. machinery, poor state of interstate tie ups, un-holistic approach by the biggest guardian elected by the country who could not serve the nation in these testing times, the way it should be. Why do I say so, am I not aware about the many initiatives taken or are being taken? But all the elected representatives and the bureaucracy have done too little, and more difficulty caused due to, too late attitude.

Everything started happening in the most desired manner when the third pillar started motivating and encouraging the first two pillars. Every good work is being done by the first two pillars only but only after the third pillar had to take a giant leap and forced them to act. The biggest question from the first two pillars will always be as to what stopped them to do what they are doing now. The “delay” is a five letter word and does not matter to many but this word “delay in action” became the question of survival of lakhs and will continue to adversely affect the life of many generations in respective linages. This five letter word has changed the course of water in many lives which was flowing with desired pace. Howsoever oxygen supply you may arrange now, the disaster done by people to people of this country will never be forgotten, although surely nor the same will be replied by any.

The second wave will be known as dangerous much dangerous and fatal than the first wave not only for the change in culture of virus alone but change in attitude of people towards people. In first wave it was a fight against virus only, in second wave it was fight against virus, various “so called” mutants of the virus, attitude of Govts. , change is stance of executives, fight against the habit of celebrating early(we all thought it has gone much before it had actually gone & counter attacked), fight against those who took opportunity in disguise & made money and found fortune in the un-fortunate situation of others suffering from pandemic.

It was difficult to stop here as my emotions are not allowing me to stop as the heart wrenching life stories in recent past are going several times in front of my eyes. It is becoming difficult for me to keep all these sufferingsof near and dear ones in my subconscious mind rather all these are active in my conscious mind and not fading away. Never felt so helpless ever. May God keep alive the feelings & beliefs of fighting back. May the God keep the belief alive that one day everything will be normal as it was.

Thanks and all the best in your respective fights.