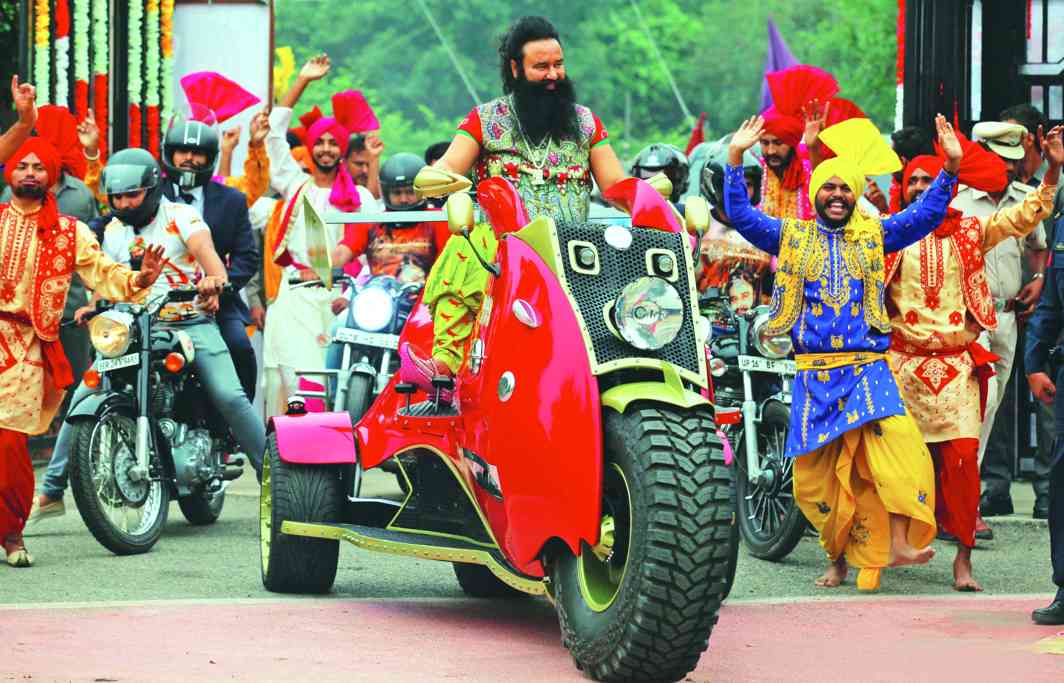 Above: Gurmeet Ram Rahim on his designer vehicle

The stunning arrest of Sacha Sauda chief Gurmeet Ram Rahim and the assessment of his assets has shown a well-oiled machinery inside the 700-acre complex in Sirsa and numerous assets abroad. Who will inherit this now?

An Olympic-size stadium, a mall-cum-multiplex, a state-of-the-art hospital, luxury hotels, specialty restaurants, a residential complex, massive halls and acres of farms, including a dairy, form part of the Dera headquarters of Sacha Sauda chief Gurmeet Ram Rahim. In addition, there is a heavy guarded and prohibited “Gufa” which was his residence. All this was spread over 700 acres in Sirsa, Haryana.

The sprawling complex, with multiple but secured entrances, was the venue of a monthly sangat (community of followers) meeting attended by thousands of mesmerised supporters from various parts of Punjab, Haryana, Rajasthan, Himachal Pradesh and Uttar Pradesh. There would also be a sprinkling of devotees from abroad.

Not far from the Dera complex is the old complex housing Ram Rahim’s close relatives, besides memorials for his two predecessors, Mastan Singh and Satnam Singh. The complex also houses a school and training centres for women.

The worth of these two complexes is anyone’s guess. As per an unconfirmed report a couple of years ago, the average deposits in the Dera accounts per day was about Rs 16 lakh daily. Incidentally, nothing is free inside the complex, except the community langar at special occasions. The Dera, of course, paid no income tax due to exemption granted to it under Income Tax laws.

While the government has been asked by the Punjab and Haryana High Court to assess the total worth of the Dera, including properties, bank accounts and other investments, what has come to light so far is that there were 103 Dera Nam Charcha Ghars (community halls for prayers) in Haryana and 98 in Punjab. Those in other states have not yet been included. Besides, the Dera had such Nam Charcha Ghars in the US, Canada, UK, Germany and Australia.

Punjab has come out with a tentative figure of the Dera assets at Rs 200 crore in the state. However, it would take a lot of time to arrive at the estimated figures. So far, the government has provided figures from nine of the 22 districts. As per the report given to the High Court, the assets identified so far are worth Rs 58 crore. Haryana too is in the process of evaluating. Given the fact that the headquarters of the Dera is in this  state and that it has many more Nam Charcha Ghars here, the total worth of assets is estimated to be more than double at least of what is in Punjab. It is also a fact that the Dera was, of late, extending its reach in central and south India. It had set up some community centres there but the details of these assets are known only to the Dera administration.

Interestingly, the Dera took no time in taking off the page detailing its centres as soon as the Punjab and Haryana High Court ordered sealing of all properties and accounts. The Court had directed that the damage to private and public properties caused by the violence unleashed by the Dera followers must be paid by the Dera. If necessary, the properties of the Dera would be sold to raise money for compensation. The Dera shall also have to compensate for the expenditure incurred on security forces deployed for law and order.

The luxury in which Ram Rahim was living in his so-called “gufa” has now been revealed through video shots that have gone viral on social media. The gold-plated furniture and dining sets and opulence inside his living area are now in public domain.

One aspect of the luxurious life of Ram Rahim that has so far attracted little notice is his fetish for luxury cars. There is hardly any top luxury car brand, including Mercs, Audi and BMWs, which was not in his Dera for personal use. In fact, he had at least half a dozen Mercs. Not even his security guards knew in which car he would sit before driving out on a particular day. He was regarded as an “expert” at “redesigning” vehicles by replacing some of the external features. He had even painted some of these cars with the gaudy colours associated with him. One of the hundreds of attributes he claimed was that of a self-taught engineer!

All evidence suggests that the Dera chief and his supporters were either hopeful of an acquittal or a short sentence. No one was prepared for the 20-year jail sentence for him. Hence, no succession plan was made and the Dera management is in a state of confusion. 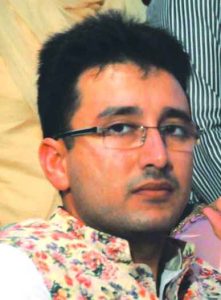 It was finally decided that his only son, 33-year-old Jasmeet Insan would be the Karajkari parbandhak (executive manager). Significantly, he has not been made successor or given the gaddi in place of Ram Rahim. He had been maintaining a low-profile. The only time he came into the limelight was when he married the daughter of former Congress legislator Harminder Singh Jassi in 2003.

He has two sisters, Charanpreet Insan and Amanpreet Insan, who are married and again shun the limelight even though they remain associated with the Dera. His wife, Harjeet Kaur, too has maintained a low-profile. All of them moved to his village in Ganganagar, Rajasthan, after his conviction. 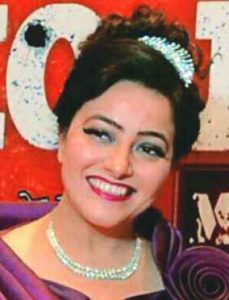 The second person in contention to succeed Gurmeet was Honeypreet Insan whom he had “adopted”. She was the only person who would accompany him all over and had acted as his heroine in his movies. She was also with him when he was convicted and had accompanied him in the helicopter to Rohtak jail.

Her antecedents, however, are dubious. Her original name was Priyanka Taneja and Gurmeet had got her married to Vishwas Gupta, a disciple, about a decade ago. He recently came out with a startling disclosure that his wife had “illicit relations” with Gurmeet and that he was a witness to it. Indeed, the manner in which Gurmeet had been treating her even in public, has raised eyebrows.

The third person who could be in the race for succession is again a low-key person, Vipassana, who had been running the show at the Dera. It is believed that she grew up at the Dera and had been heading the 250-member management committee for the last seven years. She knows the inside out of the Dera, but it is unlikely that she would find favour with the followers.

Incidentally, the succession as chief of the Dera has not been hereditary. The first chief was Mastan Singh and the second, Satnam Singh, nominated Gurmeet Singh. The first letters of the three formed the acronym MSG.

There were two wealth-generating projects that he had started recently. The first one was to produce feature films starring, who but himself, as the lead hero! The films gave him two distinct advantages: One that he could project himself as larger-than-life with almost supernatural powers and second, that it was compulsory for his followers to watch them. While for non-believers these films would be torturous and dreadful, the devotees paid for watching these. Most of these films ran “House Full” for several weeks. He also took credit for acting, direction, dialogues, music, playback singing and production.

The first film, MSG: The Messenger, was made with a budget of Rs 30 crore. While the industry estimate was that it grossed Rs 16.65 crore, the film’s producers claimed that it earned Rs 126 crore. Four other films followed. One of these was a sequel to the first film, while the other three, The Warrior Lion Heart, Hind Ka Napak Ko Jawab and Jattu Engineer, were also claimed by the Dera to be “huge successes”. Each of these, as per the Dera’s claim, had grossed over Rs 100 crore.

The other money-spinner was producing consumer products. Following in the footsteps of Baba Ramdev, he introduced 151 products under the MSG brand last year. These included soaps, toothpastes, pulses, atta, rice and other eatables, oils and organic fertilisers and some other products. Only some of the products were made inside the Dera complex. The rest were outsourced but after “strict quality control”.

The number of stores exclusively dealing with MSG products have now grown to over 50 and there were plans to increase these to 500. All premis, as the followers are known, were asked to make all their purchases from these stores. At the launch ceremony of the products, managed by a company called MSG All Trading International Pvt Ltd, it was announced that they would open outlets across the country as well as in Canada, the UK, Germany, Australia and the US. A website, MSG my God and your choice, gave details of the products. Again, figures of the turnover and profits are not in the public domain.

It was an empire few can envision.