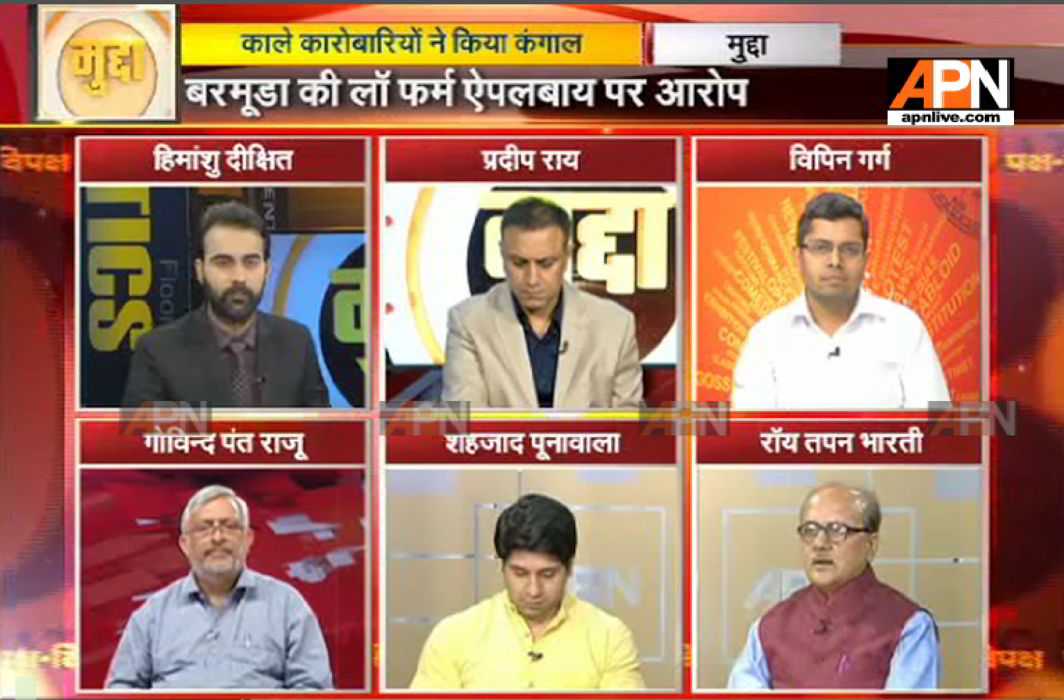 Two days before the government observes “Anti-Black Money Day” to mark the first anniversary of demonetisation, comes the sensational leak of financial data, dubbed this time around as the Paradise Papers. The Paradise Papers are a set of 13.4 million documents related to offshore investments leaked to the public in a section of the press. The data taken from offshore law firm, Appleby, could expose the hidden wealth of many individuals, including Indians, and show how corporations, hedge funds and others may have skirted taxes. Among the 180 countries represented in the data, India ranks 19th in terms of the number of names, a report in The Indian Express said. In all, there are 714 Indians in the tally, it reported. APN’s popular debate Mudda took up the issue with participants Pradeep Rai, Supreme Court advocate, Ashok Goyal of the BJP, Shahzad Poonawala of the Congress, Tapan Bharti, economist, Vipin Garg, tax expert, and Govind Pant Raju, APN consultant.

Anchor Himanshu Dixit started the debate, asking Bharti about the revelations. Bharti said the issue of offshore investments is not new. Whenever such cases have been brought to light, the governments of the day claim that they have pacts with various foreign countries, and that it is not possible for the government to intervene when people choose to deposit money in offshore banks.  “However, the government needs to be more proactive because the existence of such parallel economies to evade tax is not good,” he said.

Pradeep Rai said that the offshore investments may be black or white. As per various government notifications, people can have a certain amount of money in offshore banks, if they are doing business abroad, or in some other specific cases. He said the Pakistani Prime Minister had to resign as a fallout of the Panama Papers leak. The government should specifically go after the names of those who were indulging in tax evasion. He added that filmstar Amitabh Bachchan maintained offshore accounts as he, at one time, had a TV channel in London. The government should order probe into specific cases of obvious tax evasion, he said.

Poonawala wanted to know if minister of state for civil aviation Jayant Sinha had mentioned in his affidavit that he had an offshore account. He asked how Bachchan could be in the government’s GST advertisement when he himself is evading taxes. He said Jayant Sinha should resign following these disclosures.

Rai wondered how people close to the government always end up being spared from a probe. The government’s actions should not be based on vendetta, he said. He pointed out that India Legal had reported on Jatin Mehta, the promoter of Winsome Diamonds, which owes banks Rs 7,000 crore, and how he transferred money into an account in Zurich. On the rogues’ list of those declared wilful defaulters by banks, Winsome Diamonds and Jewellery Ltd are ranked number two.

Goyal said the prime minister is devoted to sweep out black money from the country. Whether it was the note ban initiative or the Benami Property Act, the government is focusing on a complete financial clean-up, he said.

Poonwala kept questioning Goyal as to when the government will act against Bachchan.

Garg said that this scam involves international financial planners and tax experts. He said within the due process of law, there is a lot of scope, but political will is also needed to rope in the big fish.

Govind Pant Raju said that the law to catch the corrupt is always weak and it is only the poor who get affected.

Garg also pointed out that apart from black money, red money should also be looked into. This is that money which lands up with terrorists.

Goyal said that the achievement of the Modi government has been that, as per the records, the amount of money in Swiss banks has been reduced by nearly 55 percent.

Rounding up the debate, Raju said that the government that claims that it will bring in Ram rajya should be seen to be acting this time.