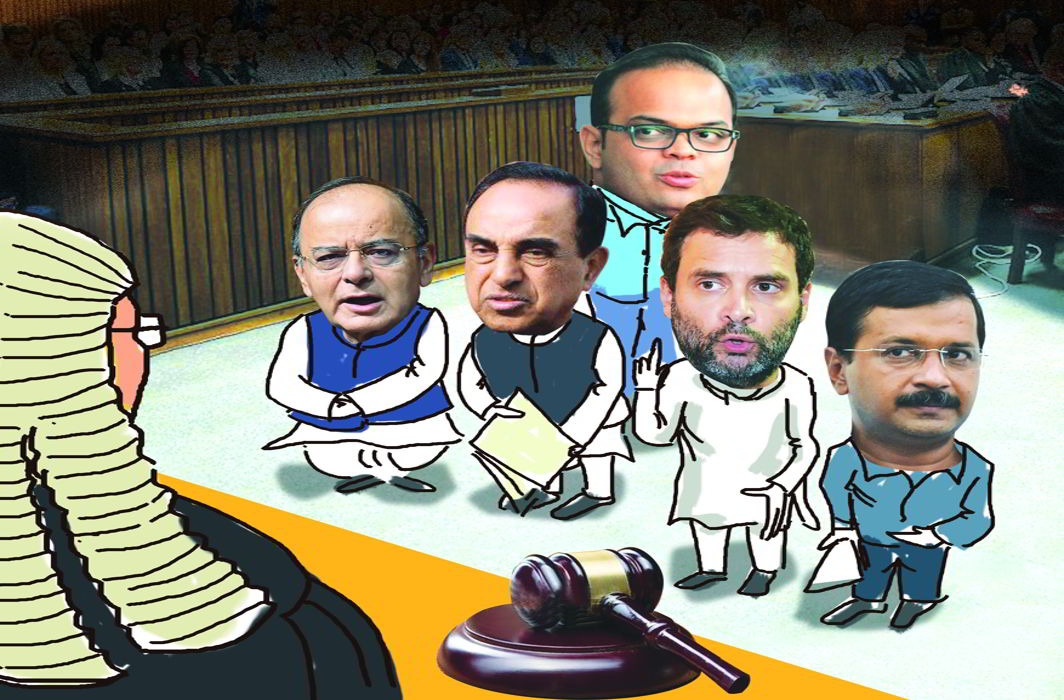 Civil and criminal defamation laws are mainly used to silence criticism and intimidate the press. They need urgent review

Arvind Kejriwal versus Arun Jaitley, Subramanian Swamy against Rahul Gandhi and now Jay Shah and The Wire’s editors. They all reflect the reality behind defamation cases in India—a majority are to do with political rivalry or an attempt to curb freedom of the press and free speech. Last May, Justice Dipak Misra (who is now the Chief Justice of India) headed a bench which delivered a judgment upholding the constitutional validity of Section 499 of the IPC which criminalises defamation and provides for a jail term of upto two years. Yet, as the latest defamation suit announced, not by the litigant, but on his behalf by Union Minister Piyush Goyal shows, the issue has many grey areas.

In legal and media circles, “chilling effect” is the term used to describe the impact criminal defamation cases have on freedom of expression. Jay Shah’s threat of a Rs 100-crore suit against a fledging, non-profit news organisation certainly falls in that category, never mind the fact that his father, BJP President Amit Shah, is the second most powerful person in the country. “Defamation cases are, subject to rare exceptions, almost always a form of legal intimidation,” says senior lawyer Vivekanand Bhoi of the Bilaspur High Court. The Jay Shah story is illustrative because only one or two media outlets carried the story which was buried by the rest of the mainstream media. The Rs 100-crore liability case filed by Jay Shah in the Ahmedabad district court, in Mirzapur, against the news portal was clearly intimidatory.

Here’s the question begging to be asked. In a democracy with an apparently free press, where is the reason not to question a 16,000-time increase in returns of a company registered in 2004, lying idle and then suddenly raking in it after the owner’s father comes into political power in 2016? Moreover, the story by Rohini Singh, a veteran reporter, was based on public records. The writer merely pointed out the facts and made no personal observations.

India is not the only country where defamation is used to silence critics. The UN and OSCE (Organization for Security and Co-operation in Europe) have clearly stated on various occasions how defamation laws are a danger to freedom of expression and are used by suppressive regimes to intimidate opponents and vigilant media into silence. That is why defamation cases in both forms—criminal and civil—are increasingly getting outdated in most countries primarily because of their rampant misuse by politicians and powerful corporations against individuals and their own employees.

There are other factors involved. Courts are often influenced by the dominant ideology of the time or by the government of the day but most progressive regimes worldwide now view this as mostly a civil matter and have decriminalised it. The underlying rationale is that reputation is a matter of individual interest and the State’s resources should not be wasted on pursuing such filings.

In India, though Section 499 of the IPC stands, the focus is now turning to intimidation through high denomination civil claims primarily because Section 499 has six exceptions and has rarely led to noteworthy convictions. The sentences rarely exceed six months and with a limit of two years means it is immediately bailable under appeal. It is also compoundable. Even this stage may be reached after 10-15 years of using the court’s time.

Petitioners have realised that filing a civil claim—though they may stretch the court’s time for longer—has a far greater chilling effect. It is so chilling as to be muzzling. Shah may be on to a similar platform. The Rs 100-crore figure is intimidating enough to silence those anxious to pursue the matter further.

Jay Shah’s threat of a Rs 100-crore suit against The Wire  falls in the “chilling effect” category, never mind that his father, Amit Shah, is the second most powerful person in the country.

“It is worth recalling that he (Amit Shah) had filed no such case against The Hindu when it had alleged in 2010 that he was a beneficiary of the Rs 1053-crore Ketan Parikh scam as a director of cooperative bank which settled the case with Parikh in which the latter did not have to pay a single penny despite being found guilty by the Ahmedabad HC,” says a former Solicitor General. Shah had by that time already become Home Minister of Gujarat and thus a man whose reputation had to be protected.

Arindam Chaudhuri of IIPM filed a Rs 100-crore case against Outlook magazine which took years to settle. As added pressure on the magazine, the case was filed by Chaudhuri in distant Guwahati. Jay Shah has opted to file his case in Ahmedabad, a state where the family wields great influence. The courts may be neutral but it means an extra financial outlay for the editors of The Wire. The fact is that once a case is filed, it has to be contested and that requires a huge investment of resources and time, sometimes more than the value of the suit itself. Media organisations and individuals faced with the extra financial burden are often forced to go in for a settlement.

An internal audit of the Delhi and District Cricket Association’s (DDCA) finances could weaken  Arun Jaitley’s defamation suit against Arvind Kejriwal. The Aam Aadmi Party and Kejriwal had accused Jaitley of indulging in corruption relating to the DDCA’s funds while he was at the helm.

Carried out on the orders of the Delhi High Court, the audit has registered financial embezzlement of several crores of rupees in the DDCA between 2012 and 2015. Jaitley was DDCA president from 1999 to December 2013.

According to the report, there was embezzlement of funds in the purchase of tickets worth Rs 2.31 crore. DDCA apparently purchased the tickets for ”distribution to government officials”. It spent Rs 1.76 crore on purchase of tickets. An unauthorised amount of Rs 65.74 lakh was paid to staff for the purchase of tickets, conveyance and lunch during the matches. Along with that, a surplus entertainment tax of Rs 2.78 crore was wasted because DDCA did not claim a refund of unsold and surrendered tickets. The Association suffered a loss of Rs 83.05 lakh as a result of mishandling of a property tax case. In January 2014, DDCA issued an unauthorised loan worth Rs 1.56 crore to three private parties, namely, Maple Infrareality Pvt Ltd, Shri Ram Tradecom Pvt Ltd and Vidhan Infrastructure Pvt Ltd. This was done to defraud the DDCA, the report says. Auditors also detected “suspicious transactions” to different contractors, vendors and suppliers for Rs 2.84 lakh.

Jaitley had refuted all of Kejriwal’s accusations and charged him with lying, but this audit report might throw a spanner in his works.

The Dipak Misra judgment in the Subramanian Swamy and others vs Union, though, has a very important facet to be kept in mind by judges when tackling defamation cases in civil or criminal form even though the judgment per se dealt with the criminal side. Judges have to be very careful in admitting cases and need to examine all sides before issuing summons, the apex court said. In the Jay Shah case, the Ahmedabad court may have erred in allowing the deputy Advocate General to file the case on behalf of the petitioner. Not illegal but certainly irregular. “The least it could have considered was how could a company with a turnover of Rs 80 crore have a reputation of Rs 100 crore to protect?” asks senior lawyer Ajay Gupta who has appeared in several high-profile defamation cases involving Digvijay Singh, Uma Bharti and Sunderlal Patwa.

“India’s laws are being crafted under dysfunctional institutions,” writes Pratap Bhanu Mehta, a noted columnist. Motivations behind every filing have to be examined by courts before they decide to admit cases in the first place. Section 66A of the IT Act was struck down for exactly the same reason—its rampant misuse by the police and opponents. Anything and everything pertaining to an individual’s reputation cannot become a matter of court or punitive proceedings, particularly when it comes to public figures. Courts have to perhaps accept this as a standing exception—that individuals will be scrutinised for their personal probity and that of their family members. Any slight has to be contested publicly and not through intimidatory summons.

Know your facts on defamation

The final argument that should demolish both defamation laws in India is economic. In a worldwide survey sponsored by the Norwegian government it was found that India ranks amongst the top 10 in number of defamation cases. It ranks absolutely at the top alongwith Pakistan when it comes to awarding punitive damages in civil cases when compared to per capita GDP. The average GDP was calculated at $12,000 and Indian courts were found to be awarding 10 times this figure on an average in defamation cases. It stands to reason that monetary claims for an individual reputation should be seen in GDP terms. An individual’s reputation cannot overly outweigh a country’s production capacity and similarly an accused (whether an individual or a media house) cannot be expected to pay bewilderingly astronomical sums just so that it is a deterrent for others.

As things stand today—with both Section 499 and civil law in place—it is really upto the courts to settle the issue in defamation cases. An individual certainly has the right to his reputation and it is even guaranteed under Article 21 but where the line has to be drawn is for the courts to decide.

Courts will have to recall that freedom of speech too is a fundamental right and they are the custodians.