Will targeting account holders and charging them fees rescue banks from the crisis of bad loans amounting to a total loss of Rs 10 lakh crore, for which they themselves are responsible?

Despite the rosy but questionable statistical halo of 7 percent GDP growth in October-December 2016 post-demonetisation, all is not well with the Indian economy. And at the core of the dark side of the fiscal story is the banking system reeling under the weight of Non-Performing Assets (NPAs) amounting to Rs 6.97 lakh crore if both private and public banks are included. The exposure of PSU banks alone to bad loans is Rs 6.4 lakh crore. That is a whopping 56 percent increase in 2016 from the year before and a 135 percent hike in the last two fiscals. To this, if you add the Rs 4 lakh crore written off since 2000, the weight of bad loans would touch Rs 10 lakh crore.

But instead of addressing the core of its balance sheet problem, namely NPAs, what are the banks doing? They are out on a mindless cost cutting/revenue generating drive with account holders, who provide deposits that are the lifeblood of banks, as their targets. These hapless citizens who endured the pain of demonetisation and have seen interest rates slide on their deposits will soon be charged for hitherto free services and virtually forced to pay a fee should they visit the bank or withdraw money from ATMs more than the stipulated number of times.

In fact, what upset bank customers no end was the announcement last week that major Indian banks, including SBI, ICICI, HDFC and Axis, have decided to charge account holders for basic services. The new parameters to come into force from April 1 vary from bank to bank (see box) but the message that went out was loud and clear—the account holder will no longer be king in the post-demonetisation and cashless era.

The protest from consumers was almost instant. It did not spill out to the streets but found expression on social media. And as the news sinks in, more visible protests are likely given that the bank charges effect most ordinary citizens. Consumer forums may also take the banks to court over the issue.

There is already a PIL pending before the bench of the chief justice of the Delhi High Court challenging the unequal and discriminatory surcharge levied on payments made with credit and debit cards. Advocate Amit  Sahni who moved the PIL had initially filed an RTI query last year with the RBI inquiring about the total amount of surcharge collected across the country from consumers at fuel pumps. He also wanted details of the guidelines on payments through debit and credit cards. The RBI responded that it did not have the required information.

In his PIL, Sahni sought guidelines from the government to prevent unlawful and discriminatory surcharge on debit and credit card transactions. The RBI pleaded with the bench last week to dismiss the PIL but the High Court has listed it for hearing on July 12.

Away from the court, discontent is brewing. There is a post that has gone viral on social media calling for a boycott of banks on April 6. One will have to see how the campaign picks up but comments on social media indicate that the public is visibly angry. Here is a sampling of the response on Twitter compiled by a business daily which serves as a barometer of the prevailing mood:

“Charging 150 is fine, but can we have working ATMs dispensing money with lights, security. — AD (@anaggh) With Rs 150 charge per transaction people will prefer keeping their money at home. Thank you Modi for taking India back in to the 70’s Thakela (@babu_thakela) #Rs 150 to support cashless transactions and #Rs 86 to support Gas less cooking? Ache din 🙁 –TataraoTorlapati (@tptatarao) with Rs 150 after 4th ATM withdrawal. Apna paisa apnanaraha… iGREEN (@mdibrahimkhan)”

A close look at the upcoming charges to be levied by banks:

The government is aware of the negative public response. A finance ministry official told India Legal that an informal suggestion was sent on March 6 to the SBI as well as private banks to “reconsider charges on cash transactions and ATM withdrawals above a certain limit”. It was also suggested that SBI “review its decision of imposing a penalty on non-maintenance of minimum balance in accounts”.

SBI, on its part, denied having received any formal communique from the government and has justified its decision to impose a minimum balance. “Today, we have a lot of burden like 11 crore Jan Dhan accounts. To manage such a large number of accounts, we need some charges. We have considered many factors and after careful analysis we have taken this step,” SBI chairperson Arundhati Bhattacharya told the media on March 8.

The position of the private banks is equally clear. They claim that each banking transaction costs a bank about Rs 50 when all overheads are taken into account. On an average, banks (both private and government) run up an annual bill of Rs 21,000 crore as operational costs and this, they feel, has to be recovered from customers. Aditya Puri, MD of HDFC Bank, was quoted as saying: “If you deposit exceptional amount of cash, it costs me. My teller has to count, then it will be put in a safe deposit. Then you come to withdraw cash again, it costs me. Pay my cost. I am not a free enterprise.”

It goes without saying that imposing additional charges cannot rescue banks from the current NPA crisis. As the finance ministry official said to India Legal: “These charges amount to precious little when you look at the larger picture of bank debts. It would serve no purpose other than frustrating the public and making the banks feel good about not giving freebies. But in all this, one basic fact is being missed—without depositors there would be no banks.” According to him, the priority area of banks should be to recover loans, ensure credit offtake and serve customers rather than tax them further at this juncture.

He sees little logic in levying transaction charges other than earning a miniscule amount of money while banks like SBI (with whopping NPAs amounting to Rs 1.08 lakh crore) are accruing huge loses, thanks to debts. Not just that, the move of introducing additional charges and minimum balance in accounts also serves as a disincentive to ordinary folk to deposit their money in banks. He also notes that the SBI as a leading PSU bank is setting a trend which other banks are likely to follow.

Former finance minister and Congress leader, P Chidambaram, was at his cryptic best when he responded to the new banking rules: “Bank charges for depositing cash and withdrawing it is a most retrograde step. Will banks be happy if customers withdraw cash in one go and keep it at home?” he asked.

When contacted, Ashok Ravat, member of the Mumbai-based All India Depositors’ Association, was of the view that the RBI must step in and regulate the charges levied by banks. “When people are slowly moving towards the habit of banking, these charges will only turn them away from it. I also feel that the RBI should start regulating the charges. How have the banks arrived at these transaction charges? They cannot be free to do whatever they please,” he said.

Traders who largely deal in cash have also been protesting. BC Bhartia, national president and Praveen Khandelwal, secretary general, of the Confederation of All India Traders (CAIT) said in joint statement: “Levy of such charges is a kind of financial terrorism on account holders. It can’t be the way to encourage digital payments by putting the people at the will and mercy of the banks. This move will greatly harm the general public since savings and salary accounts are used by the common man to discharge various obligations.” 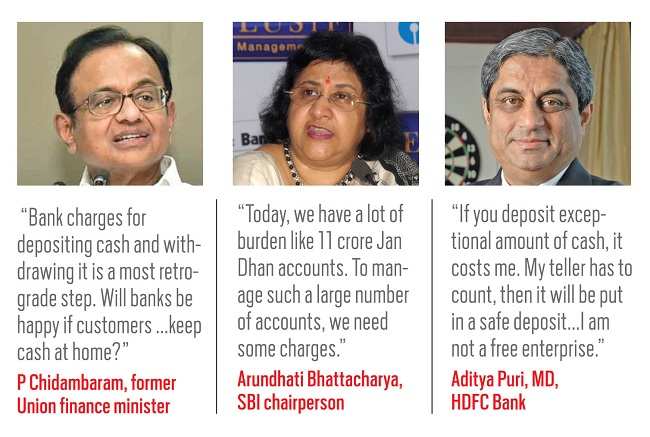 That Indian banks are in a mess is well-known. It has been in steady decline since the last 20 years. But till recently, it was fashionable among government bankers to blame much of the bad loans on the social sector to which they had to lend on a priority basis as per government directives. This is a popular notion that needs to be completely dispelled, says KC Chakraborty, former deputy director of the RBI from 2009-2014.

He told India Legal: “When I was with the RBI, I called for the figures—for data—that is very important to understand the scale and nature of the debt crisis.  It was revealed that only 33 percent of the loans are in the social sector and 67 percent, in the non-priority sector. As for NPAs, 80-85 percent are in the corporate sector. So when we say Rs 6 lakh crore plus NPAs, we are mostly referring to the non-priority sector. But then, even this amount is not the full picture. What about restructured bad loans under various categories—these are not even considered to be NPAs although they are exactly that though listed under various heads.”

The other proposal is to hand over the bad loans to private asset restructuring companies to handle. But this would involve banks taking a major loss to arrive at a negotiated settlement. The thinking is that once the toxic assets are removed, banks will sport clean balance books.

Interestingly, answers to the NPA problem don’t touch upon levying transaction charges as a solution. It would indeed be as ridiculous as trying to move a mountain with a single shovel.