The Row over Death

The capital punishment debate took a new turn when the Supreme Court said that it will rationalise the sentencing process. What ails the judgment process? Why is the death sentence a dilemma for the judges? The India Legal show on APN channel, hosted by the channel’s Editor-in-Chief Rajshri Rai, sought answers to many such questions. 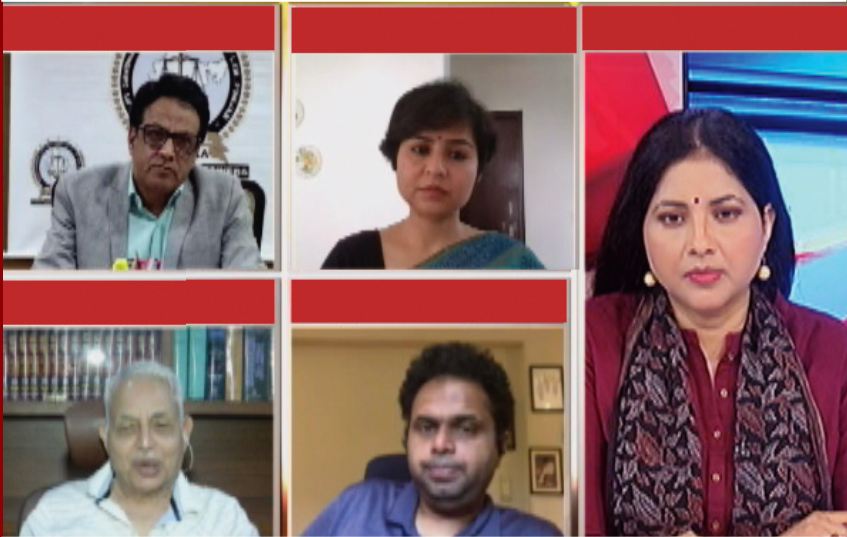 Recently the Supreme Court took suo motu cognizance of the sentencing process of capital punishment. The bench of Justices UU Lalit, S Ravindra Bhat and PS Narasimha issued notice to the National Legal Service Authority and said that it will create guidelines to streamline the sentencing process. The suo motu relates to the lack of rigorous objective criteria and mechanism in identification of mitigating circumstances.

Since 1980, it has been held that by taking into account the mitigating factors, a humane and balanced judgment may be delivered for death row convicts. In the 1980 landmark judgment of the Supreme Court (Bachan Singh vs State of Punjab), basic jurisprudence pertaining to the death penalty was developed. It was in this case that the concept of “rarest of rare” crime and mitigating and aggravating factors was enunciated. Over the years by the way of several judgments, the code further developed. The current hearing has raked up the issue afresh.

Indian courts seem to be in two minds when deciding on death penalty cases. Note what happened in the 1982 Harbans Singh vs State of Uttar Pradesh case. Three persons were awarded death penalty and their appeals went before three different benches of the apex court. Each bench gave a different sentence. This highlights the state of contradiction and confusion that surrounds the death penalty jurisprudence in India. In 2008, a two-judge Supreme Court bench in Swamy Shraddhanand vs Karnataka was divided over confirming death penalty. This was despite the fact that both the trial court and High Court were unanimous on the case. The matter still continues to divide the courts even after the guidelines issued in the Bachan Singh case in 1980.

“As for the guidelines emanating from the Bachan Singh case, it was maintained by the apex court that the death sentence should be given only as an exception and not as a rule. The circumstances of the offender along with the circumstances of the crime have to be taken into consideration. When a sentence of life imprisonment seems inadequate to the crime, only then a death sentence may be awarded. The aggravating and mitigating circumstances have to be balanced. The theory of ‘rarest of the rare’ was introduced for the first time. The categorization of heinous crimes were also done for which death penalty may be given.”

While hearing death sentence appeals, the Supreme Court has repeatedly expressed concern over the manner in which trial courts and High Courts have carried out sentencing with very little relevant information. The Bachan Singh decision did not detail the criteria for identifying “rarest of rare” cases. In 1983, the Supreme Court decision in Machhi Singh vs State of Punjab laid down the guidelines for the application of the “rarest of rare” rule to specific cases. In fact, the consultation paper of the Law Commission had observed that death penalty jurisprudence is arbitrary. The panel said it is a “legal lottery” as there was little to differentiate between cases in which death penalty was given and those in which life imprisonment was awarded.

“39A of the National Law University, Delhi gives pro bono legal aid to death row prisoners. The core issue was a collection of mitigating factors. Though in the Bachan Singh case, the court had made it incumbent to assess both the mitigating and aggravating factors before giving judgment, no methodology was defined to organize the mitigating factors. But for the last 40 years or so, no effort has been made to collect the mitigating circumstances in a case. The 39A had raised this issue by the way of an application in a case and the Supreme Court took suo motu cognizance of the matter and converted it as writ to formulate guidelines.”

The philosophical underpinnings of death penalty jurisprudence is quite in contrary to Asian or Indian spiritual values and world view which uphold the sanctity of human life and its sacred value. This is perhaps in contradiction to Semitic teachings of “eye-for-an eye”, used by Emannuel Kant to justify his doctrine of death penalty.

Senior advocate Sushil Kumar had an emotional take on the issue. He said: “To take life is a divine function. We can’t do that. In most cases which I have fought, I have given the prisoners relief. Life imprisonment is all together a different matter, but death penalty is irreversible. If possible, we should avoid it.”

Also Read: Judiciary is the guardian of Constitution: PM Modi

The personal predilection of judges also affects the case. Lack of a mechanism to gather aggravating and mitigating factors is yet another problem which the judges grapple with. The 39A report has raised concerns about the quality of sentencing hearings in the trial courts, especially about non-consideration of mitigating factors by the courts. The judges may subscribe to deterrent or reformative theory subconsciously which may reflect in their judgments. As Justice Shukla said: “The judges waver between the retributive and reformative judgments. Some judges avoid death penalty and some follow the dictates of the law and deliver according to the letter of the law. Punishment should always be commensurate with the crime and all the mitigating factors should also be taken into consideration. Only then can the problem of capital punishment be resolved.”

As the debate for death penalty rages, death penalty rates have spiked. According to the Death Penalty in India Report, the number of prisoners on death row on December 2021 stood at 488, the highest in 17 years. Despite the inclusion of death penalty provision in POCSO cases, the crime against the girl child has not mitigated.

“The Bachan Singh case is a landmark judgment in rationalizing the capital punishment. Here for the first time, the concept of the ‘rarest of the rare’ crime was introduced. However, it is not easy to define ‘rarest of the rare’ crime. It involves a lot of subjectivity. A judge’s internal perception colours the definition. We need to give the definition an empirical and statistically rigorous form. If we look at the NCRB data in 2019, 74 death convictions were given by the trial courts. In 2021, there was a 21% increase. One hundred and forty four death convictions were given in 2021. In December 2021, the total number of death penalty cases stood at 488. Though there is a rise in death penalties, we don’t see any decline in serious crimes. So, there doesn’t seem to be a one-to-one relation between death penalty and crime. The second issue relates to deterrent vs reformative punishment. Also we are yet to devise means to fathom or delineate mitigating circumstances in a convict’s life.”

In India, the deterrent theory has been best advocated in the Thirty-fifth Report of the Law Commission. The report had advocated the retention of death penalty. However, worldwide, the unsatisfactory field data related to deterrence has been a sore point in developing a exacting and scientific philosophy of death penalty. As Justice Shukla said: “Rigorous life imprisonment is a tough punishment in itself. Extra 5 or 10 years are added to assuage the public. In the Dhananjay Chakraborty case, much hue and cry was raised by public in Calcutta when he was awarded death sentence in rape of a minor girl. Chakraborty’s parents would also have liked a reformative sentencing.”

According to 354(3) of the CrPC, life imprisonment is the default punishment while death sentence can only be imposed if specific reasons exist. This is also in line with the Bachan Singh case’s directive. But the ground reality is quite contrary. Also in 44 % of the cases, the sentence was given on the day of the conviction itself. Default sentence of life imprisonment was not considered in 73% of cases. This shows the non-serious approach of the courts.

As Dr Surendranath said: “We have studied death penalty cases of the last 20 years. We have found that of the every 100 death penalty cases given by the trial courts, 40% get acquittal in the High Court or the Supreme Court. Another 55% cases get commuted. Only 5% death sentence cases get confirmed by the higher courts. It is our conclusion and also that of the Supreme Court that the concept of ‘rarest of the rare’ crime has been effectively nullified by a dysfunctional system which doesn’t interpret the guidelines consistently and rigorously.’’ Justice Shukla added: “The Supreme Court has over the years taken a rather lenient view on the death sentence. By the time the case reaches the apex court, years pass and the culprit has served a lot of his time. The Court then commutes the death penalty. It happens in 90% of the cases.”

No punishment excites so much emotion as the death penalty. Some call it barbaric, others extol its retributive value. Proponents argue that deterrence controls crime; adherents of reformative theory argue that it changes the criminal for the good.

“Debate can’t be on reformative vs retributive. We have structured our penal system in such a way that it includes both the reformative and the retributive aspects. If there is death penalty and life imprisonment provision, then the courts are wont to apply one of the two as conditions demand. Death penalty is a very individualized punishment and can’t be generalized. It differs from case to case. As long as capital punishment is in the statute books, the courts will exercise it. It should be the domain of the government to prescribe or proscribe death penalty. The Law Commission has recommended that death penalty should be prescribed for a few select cases. The fact of the matter is that there is no sentencing policy. As borne out by reports, mitigating factors are not objectively considered in the process of judgement. In the Bachan Singh case, it was mentioned that ‘possibility of reform’ should be considered while commuting death sentence. Today, courts have no mechanism to assess the mitigating conditions and base their judgements on the basis of it. In foreign countries, there are sentencing commissions which advise the courts about the mitigating and aggravating factors of the case. Bachan Singh case recommendations are violated often because at the trial court level such mistakes happen.”

India is one of the 58 countries whose law upholds the death penalty. Despite a voluminous history of legal jurisprudence and years of code evolution, a satisfactory framework for sentencing is yet to be formulated. The current hearings, however, give heart that maybe some concrete guidelines may emerge which will light the path of judges who are burdened with the most existential of legal dilemma of life versus death.