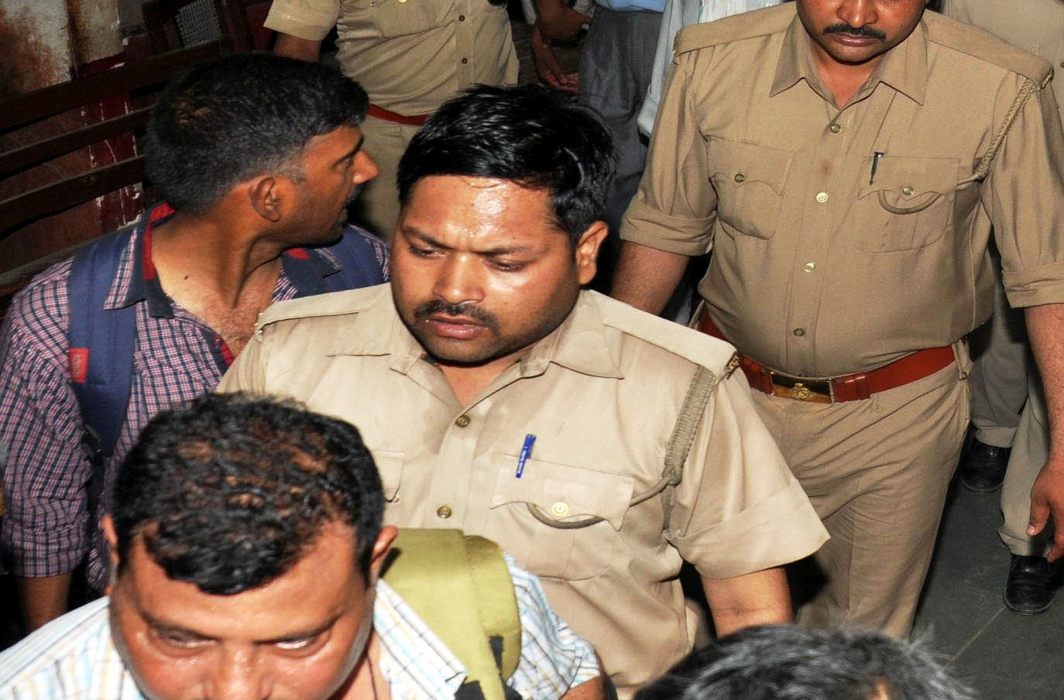 Above: Policemen convicted in a 25-year-old fake encounter case are taken to jail in Lucknow

In a brazen display of power, Uttar Pradesh cops have killed about 4 suspects a day since Yogi Adityanath took over as the Chief Minister of Uttar Pradesh

To or not to kill? There is no such dilemma facing the Uttar Pradesh police which has orders to eliminate criminals to make the state a safer place for the common man. The government’s tough attitude towards criminals is different from that of former chief minister Akhilesh Yadav, under whose rule criminals were virtually allowed a free run of the state. In the 1,200 encounters carried out by the UP police till February 15 this year, 40 criminals have been killed. It works out to 3.6 criminals per day in the 11 months of Yogi Adityanath’s rule.

Not all these killings fall in the definition of encounters where a criminal attacks a police party to avoid arrest and is shot in retaliatory firing, says criminal lawyer IB Singh. There are allegations that some of these encounters are fake. Taking cognizance of one such fake encounter in Noida, the National Human Rights Commission (NHRC) in notices to the state chief secretary and the director-general of police ex-pressed its displeasure over the police settling scores with people in the name of encounters.

The NHRC asked the officers to take “appropriate action to sensitize police personnel not to abuse their power to harass innocent citizens”.

In an earlier notice prompted by a statement by chief minister Adityanath in which he said that “criminals will be jailed or killed in encounters”, the NHRC stated: “(Even) if the law and order situation is grave, the state cannot resort to such mechanism, which may result in the extra-judicial killings of the alleged criminals…”

Not only is the NHRC raising concerns that the police in Uttar Pradesh “are misusing their power in view of endorsement by the higher-ups”, these encounters also violate guidelines laid down by the Supreme Court in PUCL vs State of Maharashtra. One of the directions said: “An independent investigation into the incident/encounter shall be conducted by the CID or police team of another police station under the supervision of another police officer (at least a level above the head of the police party engaged in encounter).”

The Court also laid down the procedure for conducting the investigation. It also said: “A magisterial inquiry under Section 176 of the Code must invariably be held in all cases of death which occur in the case of police firing and a report thereof must be sent to judicial magistrate having jurisdiction under Section 190 of the Code.”

The Court also banned out-of-turn promotion or instant gallantry rewards for police officers involved “soon after the occurrence”. “It must be ensured that such rewards are given/recommended only when the gallantry of the concerned officers is established beyond doubt,” the Supreme Court’s guidelines said.

It is not known how strictly the UP police is adhering to these guidelines as far as ordering an “independent investigation” and a “magisterial inquiry” are concerned. What is known, however, is that the policy on “rewards” has been made more lucrative, defying the Supreme Court guidelines.

While the government has allowed that district police chiefs can announce rewards of up to Rs 1 lakh for a team that carries out an encounter, it has been doubled for principal secretary/secretary (home/police) from Rs 2.5 lakh to Rs 5 lakh per arrested criminal. In the case of superintendents of police, the reward money has been raised from Rs 50,000 to Rs 2.5 lakh per arrested criminal.

However, these guidelines and notices are unlikely to rein in the trigger-happy police in UP. Even if it means killing some innocent people.

Sitting on the banks of the Ganga is meditative, heals the self, rests the body and delights the soul. But at some point, one has to question the wisdom of allowing the Kumbh when a ferocious pandemic is engulfing the country.
Read more