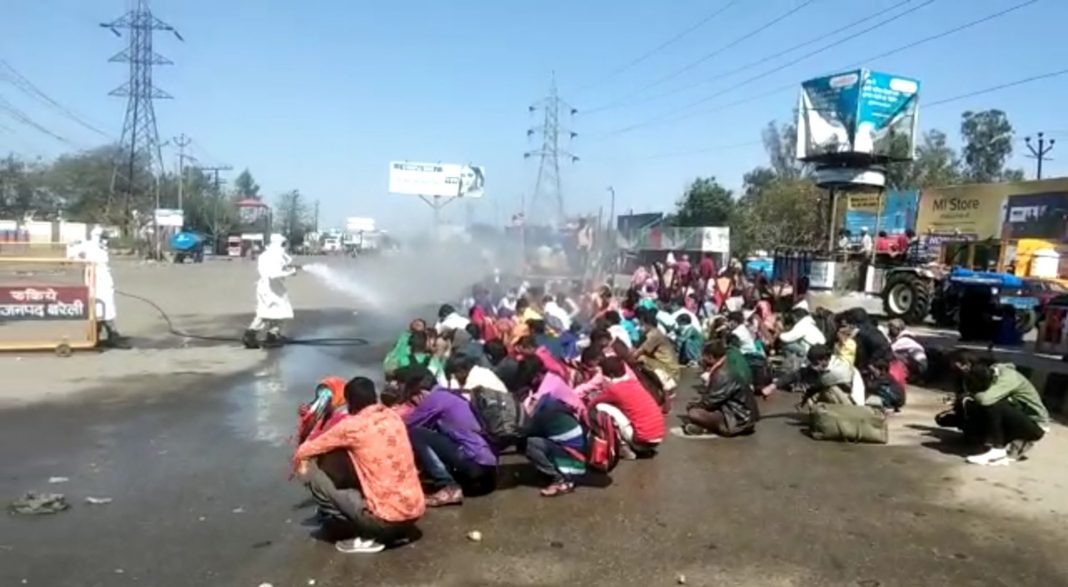 The pandemic has exposed faultlines in the State’s labour policies towards informal workers, leading to abject poverty in many cases. It has highlighted the limitations of social security and flaws in policy

The Covid-19 pandemic has brought to the fore the multi-layered vulnerability of migrants, women and socially disadvantaged workers, especially in informal sectors. Moreover, it has revealed the structural fault lines in neo-liberal policies and the excessive reliance on a market-driven economy. This has added urgency to questions of dignified wages and work, access to essential services, basic rights and social protection.

Since the beginning of the reform period, the Indian economy has gradually withdrawn from being actively involved in social/labour welfare functions and has externalised the social costs of welfare on employers and workers. It was argued in many policy documents that the financial burden of a welfare state would drag down India’s growth. And hence, the rationale for state intervention in the labour market and its catalytic role in promoting structural transformation was largely overlooked in public policy discourse.

According to National Sample Survey Office’s 68th Round, about 35 million in a labour force of 400 million have access to formal social security as covered under Indian labour laws. Of these 35 million, 26 million workers are members of the Employees’ Provident Fund Organisation, which comprises private sector workers, civil servants, military personnel and employees of various public sector undertakings. These largely fall under the organised sector and form only 6.5% of the total workforce. The remaining 93.5% derive their livelihood from the informal sector and fall outside the purview of the social safety net.

The lockdown has overnight left millions of daily wagers, home-based workers and gig workers, among others, without livelihood and income. Their work sites were rapidly shut down and in several cases, their contractors have gone missing or employers expressed inability to pay wages. Home too, soon turned into an inhospitable space, as informal settlements and slum clusters in urban areas that they live in are at risk of becoming hotspots for Covid-19 due to little scope for physical distancing.

According to an Action Aid India survey (2020), more than 82% of the workforce in the informal sector have lost their livelihood and more than 91% are unable to access social security benefits due to lack of legal entitlements and ineffective enforcement of labour laws. In this context, there is a need to redefine the role of the market, the state and “civil society”—non-state forms of collective action—for preparing resilient labour market policies.

Presently, India does not explicitly recognise a national minimum social security cover. In recent years, the government, with an intervention by the Supreme Court in the Right to Food case, gradually moved to provide nutrition and employment support with a legal guarantee through MGNREGA. However, the effective implementation of MGNREGA is less than perfect.

At present, the policy to reduce the impact of Covid-19 is based on the traditional concept of social security that only covered contingencies. This is not sufficient when workers are faced with multi-dimensional deprivation. This crisis has highlighted the limitations of social security and exposed the conceptual flaws in the implementation of social protection policies for informal workers. The looming income insecurity and vulnerability in the informal sector necessitates expanding the scope of social protection by including economic security besides basic security.

According to Periodic Labour Force Surveys (2017-18), approximately 82% of India’s workforce which works in the informal sector does not have a written employment contract. This deprives them of access to legal rights entrusted in labour laws as well as the complex process of linking Aadhaar with other details. This exclusionary process would have helped them in accessing non-employment based social security schemes. Therefore, there is a need for shifting our policy approach towards social protection to promote income security and eliminate risks in addition to coping with risks, i.e. a complete shift in the prevailing strategy from risk minimisation to protecting existing income to raising the income of informal workers.

According to the ILO (2017), work related insecurities for informal workers consist of random shocks and structural features. A random shock can be in the form of an illness or premature mortality. This can lead to a health shock due to catastrophic health expenditure and loss of job and affects households from time to time. It also includes natural calamities such as epidemics, cyclones and earthquakes. Other insecurities come from the structural features of households that remain constant to a large extent throughout their lives such as age, gender, caste, marital status and ownership of assets.

Besides these, one of the most important structural features is whether they are salaried, casual workers or self-employed workers. This is an extremely important feature of workers in the informal economy. They are a highly heterogeneous group but have always been seen as a monolithic working class.

Covid-19 has forced the Global South to change work arrangements, state-business relationships and the way it treats people in the informal sector. The crisis has also provided an opportunity to governments to improve regulation of the informal economy and to incorporate once marginalised social segments into formal institutional arrangements.

Until now, economic reform tended to prioritise business at the expense of labour, dealing with worker informality as a feature of free market exchange. But high levels of informality have been associated with the perpetuation of low-skill, low-value and low-productivity economic structures. In this difficult time, decent work deficits persist and labour underutilisation rates are largely ignored.

The socio-economic effects of the pandemic will continue to gravely affect the unemployed globally, with an additional 24.7 million people facing job loss. Till now, the emphasis on efficiency in operation and  management and outcomes of various economic and social systems were not a conscious collective choice, but a response of the system to incentives that individual components face. This brought much of the world to rely on complex, nested and interconnected systems to deliver goods and services around the globe. While concentrating on economic goals had many benefits in the short run, the Covid crisis has shown how our approach has resulted in the resilience of key systems to shocks and allowed failures to cascade from one system to others. A systems approach, based on resilience, will be an efficient prognosis to prepare  socio-economic systems for future shocks.

According to the Constitution, Article 41 of the Directive Principles asks the state “within the limits of its economic capacity and development” to make effective provision for securing the right to work, education and public assistance in cases of unemployment, old age, sickness and disablement, and in other cases of undeserved want. And Article 42 says the state shall make provisions for securing just and humane conditions of work and for maternity benefits.

Both Articles envision that universal social security is secured to prevent the kind of abject and heart-rending suffering that the working class has been subjected to during this crisis. Hence, it is imperative that policy must entail shoring them up through emergency measures and address the structural causes that induce and deepen their vulnerabilities. The crisis triggered by the lockdown has magnified these structural issues which shape the daily lives of people in the informal economy. It has also increased casualisation of the workforce in both the formal and informal sectors leading to a high prevalence of low-wage, low-productive labour, little or no access to social security and safety nets in the informal sector, lack of access to decent housing and basic services, and government negligence and apathy towards migrant workers.

At the micro level, the risks for informal workers have been transferred from employers to workers through flexible and precarious work and insecure employment. Private provisioning of healthcare combined with insurance-based health schemes, declining state spending and weakening of labour organisations have diluted the earlier mandatory provisions of social security. At the macro level, it prevented collective bargaining and legal entitlements to access labour welfare schemes.

Thus, there is a need to revive India’s active intervention not just as a matter of choice but as a concern for social justice.