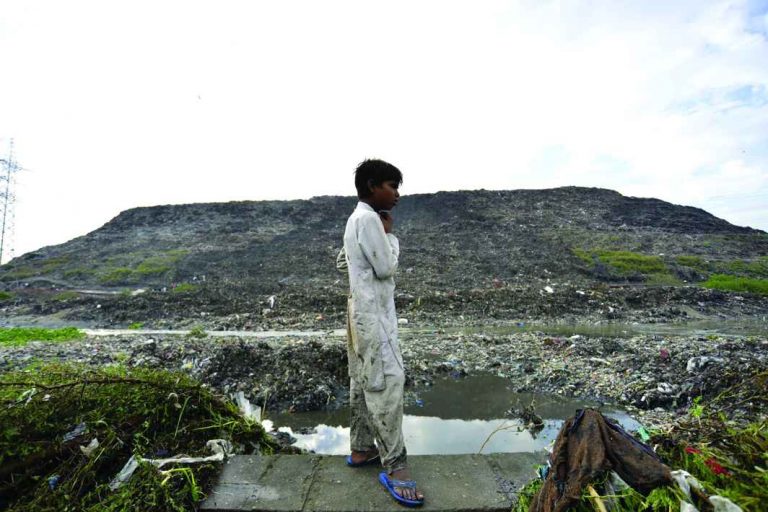 Above: The landfill in Ghazipur in East Delhi that came crumbling down. Photo: UNI

Despite stringent laws, the collapse of a humungous landfill in Delhi brings into focus our complete failure to scientifically manage, segregate and recycle our garbage and to contain refuse generation at source

On September 2, two people died when a man-made mountain—a landfill in Ghazipur in East Delhi—came crumbling down leading to a high alert being sounded. The Lieutenant Governor had to order the immediate closure of the site. The search immediately began for an alternate site to accommodate the daily generation of 3,000 metric tonnes of garbage from the East Delhi region.

Rani Khera, a settlement in north west of Delhi, vehemently opposed the use of its land to act as the alternative landfill. Ditto the environment organisation, Yamuna Jiye Abhiyan, to the use of the Yamuna Riverbed for dumping garbage. As a result, the authorities were confronted with a garbage crisis as it began piling up.

It is not just East Delhi. A big sanitation crisis looms large over the capital—in the short and long-term—as finding a sizeable piece of land for dumping garbage, away from human settlement, is impossible. And why will any neighbouring state agree to accommodate Delhi’s daily mountain of refuse?

But in trying to find a suitable dumping ground, an issue which was lost sight of, was the complete mismanagement at all levels of garbage accumulation, segregation and treatment. Don’t blame it on absence of law or bad governance. The fault also lies in urban consumption patterns which adds to the volume of waste generated.

A look at what goes into the dustbin reveals how Indians are nonchalant about what they are casually disposing off—from biodegradable matter to plastic and hazardous material of every sort, not to miss the mounds of construction and demolition waste each time an individual’s house is refurbished. Here’s a sampler:

Many of these items are non-degradable, and unless segregated and recycled, might cause immense harm in the form of toxins percolating into ground water, soil and the food chain. Leaked lead from discarded batteries, for example, can poison groundwater. And as it happened in the case of Ghazipur, a build-up of methane from discarded items can pollute the air, and even cause an explosion, which may have caused the collapse of the landfill.

Citizens of this country take great care in segregating garbage at source, a practice inculcated since childhood 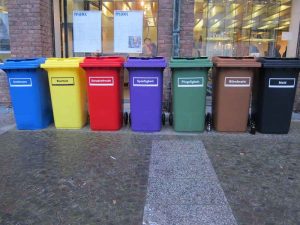 In 2009 when this writer was invited for a two-month media programme to Berlin, the city tour on Day One commenced with a visit to the garbage dumping ground next to the building we were staying in. The key to each participant’s room also opened the gate of the compound where four huge containers coloured blue, green, yellow and black were placed.

The Blue receptacle was for paper, brown for food waste, yellow for plastic and black for miscellaneous items. The programme coordinators described in great detail how to segregate waste and to use the black bin as the last alternative.

Further, we were told that every supermarket and general store has counters in which empty glass bottles can be returned and little money earned.

Batteries were not supposed to be discarded with garbage—there are counters in shops where these can be dumped. Similarly, there are days assigned when electronics or furniture can be disposed of—you leave the item you want to get rid of at a designated spot—and a van comes to collect it. Eatables and clothes, are similarly left, and are picked up by civic authorities—or by any person who feels the need for it.

Several news reports had cautioned that this could happen. A news report in the Hindustan Times on March 28, 2016 read: “Methane trapped beneath makes Ghazipur landfill a ticking  time bomb”.

A Times of India report of September 2016 said that the landfill had been “blowing clouds of smoke for a fortnight now, leaving people living nearby along the UP border miserable…. The smoke results from the spontaneous combustion of methane, a gas produced when garbage decays.” Similarly, in Mumbai,   a haze of smoke covered the city for days when the landfill at Deonar caught fire in 2016.

At present, 62 million tonnes of waste is generated annually in the country, out of which 5.6 million tonnes is plastic waste, 0.17 million tonnes biomedical waste, 7.90 million tonnes hazardous waste and 15 lakh tonnes e-waste. These figures were divulged by then environment minister Prakash Javdekar in April 2016, when he announced the Waste Management Rules of 2016.

The Rules that were announced in 2016 provided for a comprehensive coverage and management of various categories of garbage including plastic, e-waste, biomedical waste, construction and demolition waste and solid and hazardous waste.

Here’s what the rules stipulate for solid waste:

Every waste generator (which includes common people) shall:

(a) Segregate and store the waste generated by them in three separate streams namely bio-degradable, non biodegradable and domestic hazardous wastes in suitable bins and hand over segregated waste to authorised waste pickers or waste collectors.

(b) Wrap securely the used sanitary waste like diapers, sanitary pads etc., in the pouches provided by the manufacturers or in a suitable wrapping material and shall place the same in the bin meant for dry waste or non- bio-degradable waste.

(d) Store horticulture waste generated from their premises separately in their own premises and dispose of as per the directions of the local body from time to time.

There are also directions that must be followed by organisers of events and resident welfare and market associations, and gated communities.

The rules for plastic waste management are equally clear. The manufacture, stocking, distribution, sale and use of carry bags, plastic sheets or covers made of plastic and multilayered packaging, is subject to a number of conditions, including adherence to quality; emphasis on segregation, collection, storage and recycling. These rules stipulate responsibilities for manufacturers, waste generators, civic bodies, recycling units and concerned ministries.

Rajender Singh, who has founded the start-up eKabaadi and is partnering Vatavaran, an NGO involved with garbage management in Delhi, says that despite the laws the situation will not improve unless people change their habits. “The government can’t come to your home and tell you how to consume and dispose of waste,” he says, adding that traditionally Indians have been averse to throwing away things. “We give away plastic and newspapers waste only because it fetches a price, but at the same time we refuse to segregate garbage at home, thinking it’s beneath our dignity and is someone else’s job. This is because caste is so ingrained in us.”

Raghav of Vatavaran points out that middle class homes are not even willing to shell out legally accepted wages to garbage collectors and rag pickers. For a pittance, they have to segregate soiled diapers, food refuse, broken glass pieces and rusted metals which make them vulnerable to diseases and injuries. “It’s inhuman for us to expect the rag pickers to do that work,” he says.

While Vatavaran has fanned out to some localities in South Delhi teaching households to segregate garbage at source, eKabaadi is focusing on institutions and caters to the BSF, the US Embassy, Teri University, AICTE, Snapdeal, DPS, and Pathways, among others.

At the national level there are examples of civic bodies and citizens coming together to transform the face of cities. The case of Indore is one example. There, the civic administration joined hands with outfits like Eco Pro Environmental Services to inculcate the segregation-at-source culture among citizens. It also took some strict measures to discipline the workforce of the municipality and introduce new user-friendly garbage vans. The result is that Indore is today dubbed the cleanest city in India.

Dr Nikita Rawal, who returned to Indore after years in the UK, says the city is now relatively clean.

“On my earlier visits, garbage was everywhere. But now the corporation vans, playing catchy tunes over the sound system to attract public attention and support, make multiple visits to each locality for collection. Changing the mindset of Indore’s people seemed difficult, but it has happened. People segregate garbage at home and wait for the vans.”

Elsewhere, individual initiatives are showing results. Prerna Raturi, a journalist and mountaineer based in Dehradun, feels proud that her home is near zero vis-à-vis garbage.

“It used to bother me a lot that our family of three used to generate a bucket-full of garbage every day. So, I shifted to turning it into compost, with the help of a Bangalore-based company. I have a compost box in which one layer of kitchen waste is covered with a layer of bio-glue, containing micro-organisms.  The compost is ready in 10 days. It has helped me grow a lush garden. I also distribute compost to my friends and relatives. The residual water is also a rich manure source.”

As for paper waste, she hands it over for recycling to Waste Warriors, an outfit working to keep the hills clean. And the family has minimised the use of polythene and wrapping material. “I now take a bag with me to buy groceries and vegetables, avoid use of tissue paper, and stay away from plastic cutlery. Some like-minded friends in fact take their own plate and glasses to eateries, and buy loose tea leaves and pulses in containers, to avoid using plastic bags. It just takes a little will to do it.”

It surely is time to introspect on how Bharat can become truly swachh.

We must all become agents of change. Governments alone cannot make our environment clean and green.