Should civil society be asked to “ascertain facts” before the police invokes a stringent provision of law when it comes to allegations by a wife of cruelty by her husband or his relatives? The issue has become the subject of much controversy and outrage among women activists ever since a Supreme Court division bench issued directions in the case of Rajesh Sharma v State of Uttar Pradesh on July 27. It said that some consultation be done before invoking a very stringent statute-Section 498-A of the Indian Penal Code.

In this particular case, the husband and four of his relatives, including his parents and siblings, had first approached the Allahabad High Court, seeking quashing of summons issued to them by the additional chief judicial magistrate, Jaunpur, Uttar Pradesh, to face trial, following the registration of complaint by his wife in December 2013.

The couple had married in 2012, when the girl’s father gave dowry as per his financial capacity. But the husband and his family were not happy with it and began to abuse the complainant with the demand for Rs 3 lakh and a car, which the girl’s family could not arrange. The wife alleged torture by the husband and a further demand for Rs 50,000, and a gold chain. A case was registered under Section 498A and 323 of the IPC, read with Section 34 of the Dowry Prohibition Act.

The High Court, following the failure of mediation between the parties, found no ground to interfere with the order of summoning, and dismissed the petition. This is not one of the rarest of rare cases, where legitimate prosecution can be scuttled at its very inception, the Court had held. The husband and his relatives then challenged this dismissal in the Supreme Court, contending that there is need to check the tendency to rope in all family members to settle a matrimonial dispute.

They submitted that omnibus allegations against all relatives of the husband cannot be taken at face value when in normal course, it may only be the husband or at best his parents who may be accused of demanding dowry or causing cruelty. To check abuse of over implication, clear supporting material is needed to proceed against other relatives of a husband, they argued.

The Supreme Court’s judgment, delivered by Justice Adarsh Kumar Goel, on behalf of himself and Justice Uday Umesh Lalit, womens’ rights activists contend, has set the clock back on the struggle against domestic violence by at least 35 years. They point out that the court had passed directions on the basis of assumptions and prejudices prevalent in the society expressed by men folk from time to time. Incidentally, it was following the persistent struggle by women’s organisations that Section 498-A was added in the statute.

Section 498-A of the Indian Penal Code is not just a legal provision, aimed to punish cruelty by husband or his relatives. Inserted into the Code in 1983, it has come to be recognised as a married woman’s legal weapon against domestic abuse and cruelty at the hands of her in-laws. The provision reads: “Whoever, being the husband or the relative of the husband of a woman, subjects such woman to cruelty shall be punished with imprisonment for a term which may extend to three years and shall also be liable to fine.”

The apex court judgment records the view of the amicus curiae in the case that there is a growing tendency to abuse the law to rope in all the relatives, including parents of advanced age, minor children, siblings, grandparents and uncles on the strength of vague and exaggerated allegations without there being any verifiable evidence of physical or mental harm or injury.

The Court noted that it was told that at times this has resulted in harassment and even arrest of innocent family members, including women and senior citizens. “This may hamper any possible reconciliation and reunion of a couple”, the Court was further told.

False accusations can result in harassment and arrest of innocent family members, thereby hampering any possible reconciliation and reunion of a couple.

The Court recorded that most complaints under the provision are filed in the heat of the moment over trivial issues. Many such complaints are not bona fide, it said. “Uncalled for arrest may ruin the chances of settlement,” it concluded.

The bench, on the basis of the Law Commission’s report, and previous judgments by the Supreme Court, and some high courts, assumed that remedial steps are required against two phenomena: uncalled for implication of husband and his relatives and arrest and continuation of proceedings in spite of settlement between the parties since the offence is non-compoundable and uncalled for hardship to parties on that account. The Court took note of the fact that certain safeguards against uncalled for arrests and insensitive investigation have al-ready been addressed by the Supreme Court in previous cases. “Still, the problem continues to a great extent,” it held. 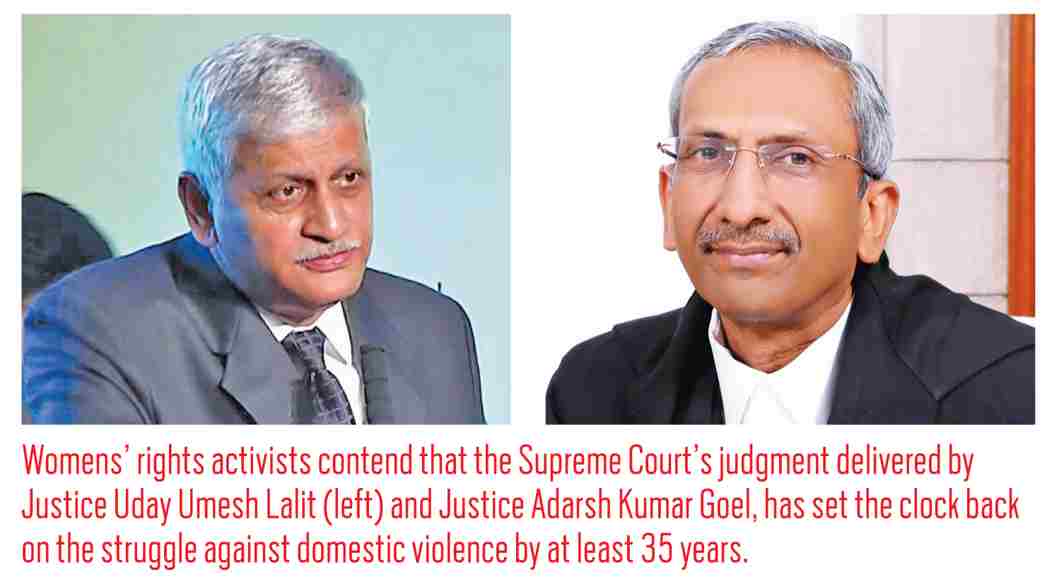 To remedy the situation, the bench justified involvement of civil society in the aid of administration of justice, apart from sensitising the investigating officers and the concerned trial courts. Thus authorities providing legal services in the districts have been directed to constitute one or more family welfare committees, preferably comprising of three members.

According to rights activists, the composition of these committees as directed by the bench may be a cause for concern since they include—para legal volunteers/social workers/retired persons/wives of working officers/other citizens who may be found suitable and willing—in other words, almost anyone could qualify to be a member. Every complaint under Section 498A received by the police or the magistrate will be referred to and looked into by such committee, which “may have” interaction with the parties personally or by means of telephone or any other mode of communication including electronic communication, the bench held.

What, if through interaction, the complainant is threatened or intimidated into submission by members of the committee, ask lawyers and activists. It is not clear why the bench felt that the report of such a committee—which could include anybody as the bench has not specified who is likely to be “suitable”—is superior to the report of the investigating police. Moreover, the one- month time—which is not mandatory—will give the accused enough time to influence and intimidate the complainant, or erase the evidence, before the process of law is set in motion.

The judgment also said that the members of the committee may be given such basic minimum training as may be considered necessary by the legal services authority from time to time, and they may be given such honorarium as may be considered viable. Activists wonder, whether such physical and financial support to the members, could result in the police having to submit to views of the committee (even with an anti-woman-bias) which cannot be contested by the complainant if the police decides to avoid punitive actions under the Act.  This could result in the defeat of the very objective of the penal provision.

The bench also made it clear that in respect of persons ordinarily residing out of India, impounding of passports or issuance of Red Corner Notice should not be routine. With the rise in matrimonial disputes of Indian couples settled abroad, this direction is likely to help the accused from fleeing the country to avoid prosecution, it is felt.

The Supreme Court’s intervention has raised the question whether the assumption that the law has been widely abused against innocent persons could be a ground for diluting it.