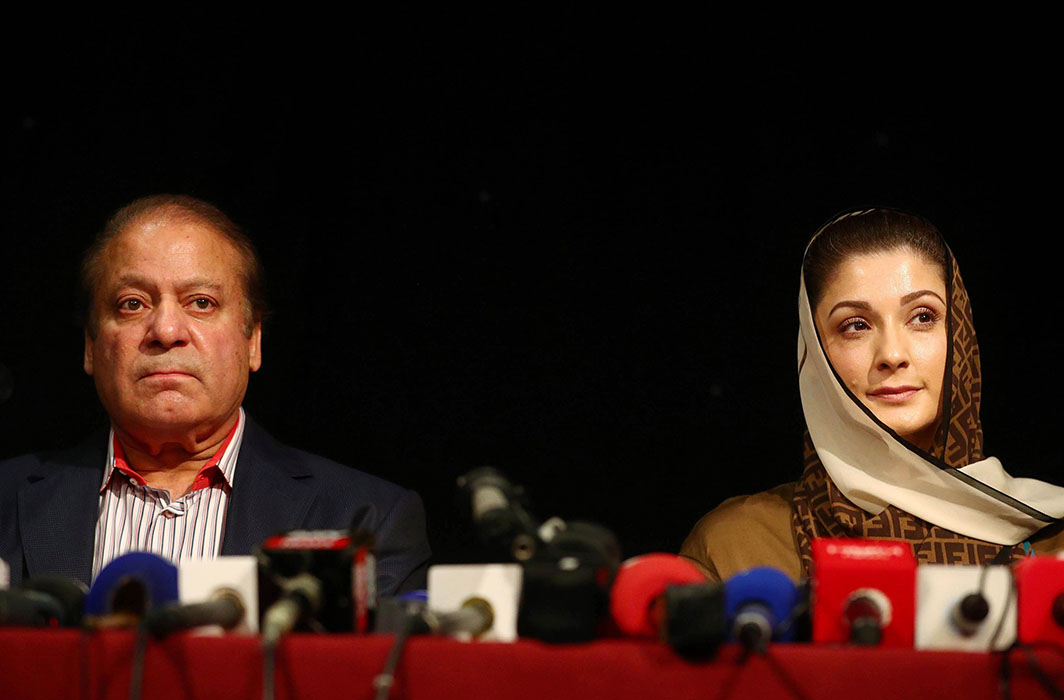 Pakistan’s two most popular leaders – late Zulfikar Ali Bhutto and Nawaz Sharif – chose their daughters as their heir apparent. Bhutto had started grooming Benazir very early on. Benazir’s first lesson in politics started in 1972 when she accompanied her father, who came to India for the famous Shimla Agreement. But she became a battle-hardened politician during Gen Zia-ul Haq’s regime, which saw her father hanged and her incarceration in solitary confinement. Today, destiny has brought Maryam at the same crossroads. With her sick father in jail, Maryam has been left with no choice but to go the Benazir way. In July 2018, when she was in London to attend to her ailing mother, Maryam was asked if she was ‘new Benazir Bhutto’? She said she greatly admired late Benazir but wants to carve her own niche. One saw a glimpse of Benazir in Maryam when she and her father were convicted by an accountability court on corruption charges. At that time her cancer-stricken mother Begum Kulsoom was on death bed and the popular perception in Pakistan was that after the sentence the father-daughter would never return to Pakistan. But leaving her ailing mother, who died a few days later, Maryam, along with her father returned to Pakistan and surrendered before authorities. People say even in jail she refused special facilities and wanted to be treated as an ordinary prisoner. Now, out on bail after the Islamabad high court suspended her jail term, Maryam, like Benazir, has decided to take on Pakistan’s powerful military. With her father being implicated in case after case, Maryam, who is vice-president of Pakistan Muslim League Nawaz (PML-N) has virtually assumed the leadership of the party. Officially, uncle Shahbaz Sharif, who supposedly has good relations with the army and does not want confrontation with it, remains president of the party.

Maryam debunked her uncle’s narrative of reconciliation with the military when she declared that she will not allow her father to become another Mohamed Morsi, Egypt’s former president, who died in the courtroom, and will go to any extent to save him.

On July 6, she dropped the biggest bombshell when during a press conference, she screened a video in which  accountability court judge Arshad Malik was shown admitting that he was ‘blackmailed’ into convicting Nawaz Sharif in one of the three corruption cases filed against him last year in the wake of the 2017 Panamagate verdict by the Supreme Court.

During the press conference Maryam, flanked by her uncle Shahbaz Sharif and PML-N Vice President Shahid Khaqan Abbasi, not only demanded the release of her father also without naming the military warned that if someone tried to create mischief she will release more tapes, which will implicate many ranking people. The following day, despite the ban by the authorities, she held a rally in the Punjab town of Mandi Bahauddin where she again reiterated the demand for Nawaz’s release.

Senior political analyst Mahzar Abbas says it reminds him of Benazir Bhutto was 1978 when her father was in jail  and party was doing nothing for his release.

Kashif Abbasi, a senior TV anchor, appearing on TV talk show, said: “Now, it’s clear that Maryam will be the leader of the party and Nawaz Sharif’s narrative of confrontation with the institutions will be the main plank of the party.”

Maryam has brunt all bridges because her uncle Shabaz’s reconciliatory narrative was not paying any dividend. In fact, the way Imran Khan government was trying to finish the PML-N by putting its top leadership in jail on corruption charges, it was left with no choice, said Abbasi. “If this continues the entire leadership of the PML-N will be in jail and nobody will be left to defend the party. So, it has decided to come out fighting,” Abbasi adds.

Senior journalist Hamid Mir says the last straw was the arrest of Rana Sanaullah, Nawaz Sharif’s right-hand man, on the charges of drug smuggling. After that senior leadership realised that it was time to put up resistance.

Prominent political analyst Najam Sethi says from day one PM Imran Khan had declared an all-out war against Nawaz Sharif. Maryam’s press conference and subsequently, public meeting should be seen as the first signs of resistance. How far she will go, only time will tell, he added.

Mir says through Maryam’s press conference the PML-N has sent out a clear message to all that now the narrative of Nawaz Sharif will continue and Maryam will lead the party. Sethi also agrees with this as he says Maryam takes every step after consulting her father.

But the main problem Maryam faces is that she is out on bail as her sentence has been suspended and if her public meetings start getting massive response there is a possibility that she might be put in jail again. After her press conference, the accountability court has summoned in a case in which has been already convicted and an appeal against judgment is pending in the Islamabad High Court.

PEMRA tweeted late night on Saturday, saying the “unedited live telecast” of Maryam’s speech “against [the] judiciary and state institutions” was in violation of the regulatory body’s laws and code of conduct.

The Imran Khan government on Tuesday decided to block media coverage and interviews of politicians who are convicts or under-trial prisoners and directed the PEMRA to fulfill its “responsibility” to discourage airing of such programmes by electronic media.

Addressing a post-cabinet meeting press conference, Education Minister Shafqat Mehmood said Prime Minister Imran Khan and members of his cabinet unanimously decided that no convicted or under-trial prisoner should be given media coverage or should be allowed to give an interview. He quoted the prime minister as saying, “those who have plundered national wealth and brought the country on the verge of collapse should not be glorified. No democracy permits interviews and media coverage of those who have been arrested on charges of corruption.”

Given this background, the summons from Islamabad accountability court on July 19 will give Maryam another opportunity to dominate media headlines.

Through a series of tweets on Wednesday, Maryam announced that she would neither offer her arrest on a platter to the government by not appearing before the accountability court nor she wanted to lose the chance of exposing the black deeds of the National Accountability Bureau (NAB) acting as a tool of the ‘selected’.

“They want to arrest me or detain me at every cost. But the problem is that they have nothing against me, which led them to lodge a baseless case against me in which I was already convicted but the high court suspended the sentence. This move is illegal and ridiculous, so it won’t last long,” she said in a tweet.

Mir says the wrong policies of the Imran Khan government are responsible for Maryam and her party adopting the path of confrontation and in the coming days, this resistance will increase as Imran Khan has pushed her to the wall.

Although it sounds glamorous to compare Maryam’s struggle to get her father freed with Benazir’s political journey, the path she has taken is riddled with dangers. Benazir could not save her father from hangman’s noose but she continued his legacy which saw her becoming the first woman prime minister of Pakistan. Unfortunately, she paid with her life for her struggle for democracy and civilian supremacy in Pakistan.

Maryam also fears that her father, who is suffering from serious heart ailments, may also not come out alive from the prison.

Maryam’s main aim is that she doesn’t want her father to become another Morsi and in this struggle whether she becomes another Benazir or  creates her own image, only time will tell.