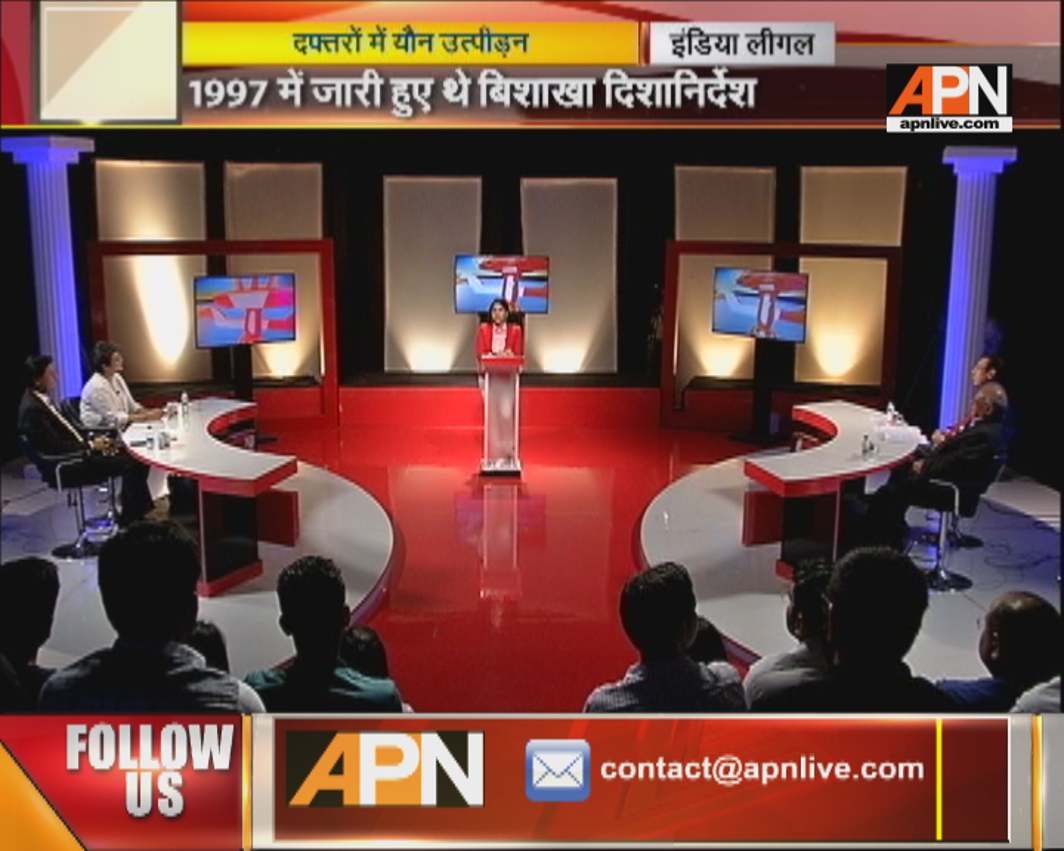 The show was anchored by Rajshri Rai, Editor-in-Chief, APN. The eminent panellists included:

Rai started the debate by asking Manisha: “Do you think that SHe-box move will be a good platform for sexually harassed women?”

Manisha replied: “It will prove a good platform for the women as they would be able to air their views secretly as the online platform enables one-to-one communication very effectively. However, I think that these things are not being embraced as they should have been.

“The men do not want to change themselves. They still regard women as super-women. She can do job, do daily chores, withstand abuses etc. I feel we should understand women in entirety. I still feel that these laws are ill-equipped to fight sexual harassment at workplaces. We need a law in which a woman straightaway gives a call to the authorities and her problem is resolved.”

Dinesh Jain too praised the SHe-box but with some riders. Jain said: “The law is already in place as Vishakha guidelines were laid back in 1997. The Government has taken 17 years to enact a law (Sexual Harassment of Women at Workplace [Prevention, Prohibition and Redressal] Act, 2013). All the provisions are present in the law — form a committee, register complaints and resolve it within 60 or 90 days. After your enquiry a report has to be submitted to the employer within 10 days. Law also has a provision to punish the female employee who files false complaint. As you can see, everything is in place.”

Jain continued, “Undoubtedly SHe-box is an appreciable attempt, but my question is when a law which has all the provisions was already in place, under the same law, why SHe-box has been formed now? If a complaint is made then an internal constitutional committee will be made and if a complaint is made to the SHe-box they too will forward it to the same committee. The only advantage that I see is that there will be monitoring for timely redressal of the complaint.”

Justice Vijendra Jain was of the view that though SHe-box is a good move, it is the mindset which needs to be changed to tackle the menace of sexual harassment at workplace.

Jain elucidated, “In Vishakha, there is a provision that a woman can complain even if a man shows her obscene photos but what if he keeps the photos with him after that or he says something abusive, how will the woman prove it? Many a times people casually use many abusive words, it is used as an adjective but how can it be proved? Suppose if the incident happens in front of four people what if the four people do not want to come to the front and speak about it? Moreover, a man who discriminates his wife and daughter in the family, he in the office too, will definitely try to hammer that women are weaker. This too should be brought under the law.”