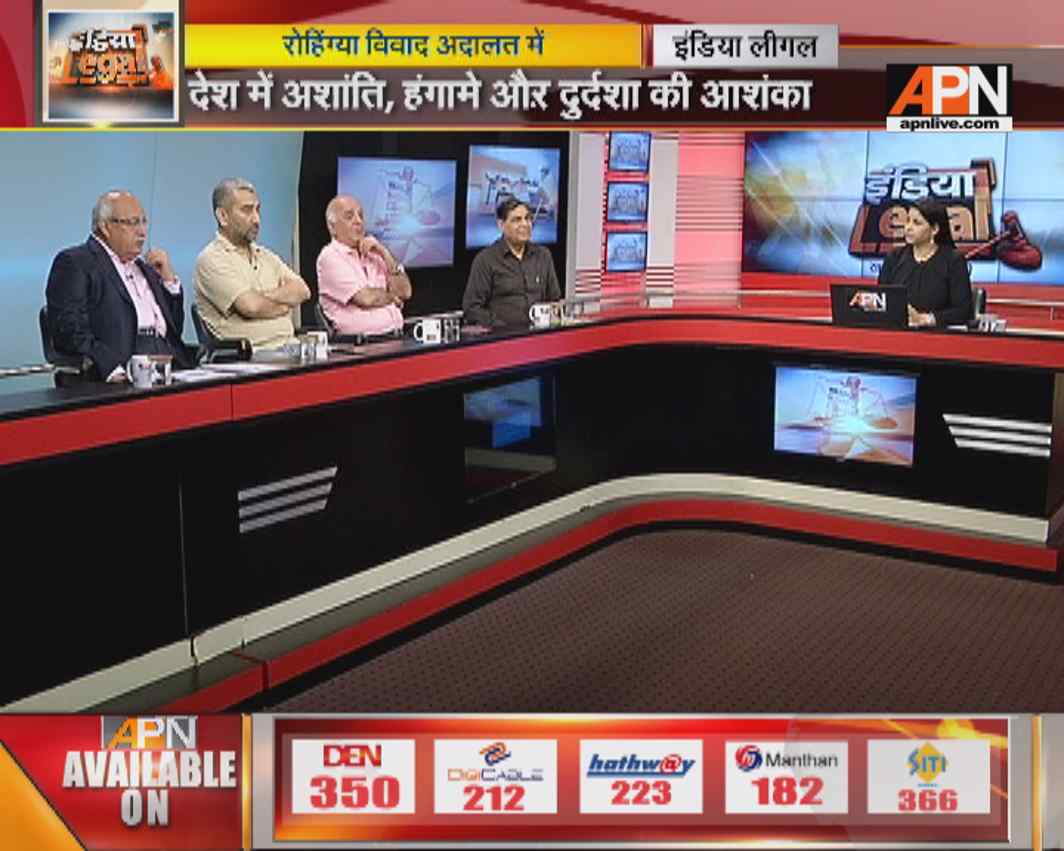 The recent edition of India Legal show deliberated upon the recent plight of Rohingyas and also the three PILs filed on the issue of Rohingyas in the apex court. The show discussed the various peculiarities on the deportation of Rohingyas from India and providing asylum to them.

Rai started the debate by putting the question to Justice Misra. Rai asked, “The PIL which has been filed on humanitarian ground cites Articles 14, 21 and 51(c) to the present plight of Rohingyas in India. Right to Equality, Right to Life and Personal Liberty and 51(c), does it apply to similarly Rohingyas as compared to the citizens of India.”

Mishra replied, “First of all, Rohingyas are not the original inhabitants of India. The Constitution of India envisions in the Preamble — justice, fraternity, equality and liberty. So, in this context it has to be noted that those who are the original inhabitants and are similarly living in the same conditions (internally displaced) just as Rohingyas, they should also be accorded the same treatment. So, Article 14 on which this rationale is based upon is irrelevant. As far as Article 21 is concerned, whoever comes to India as immigrant, India will provide means for livelihood to them. But for that, no claim should be made in the courts.”

Govindacharya who has filed one of the PILs urging deportation of Rohingyas said, “In every other media report we have seen that the Al Qaeda and the LeT have contacts with the Rohingyas. Terrorist organizations will definitely use them. Moreover, demography has a crucial impact on the borders of any country. India’s partition also took place on those lines. These are sensitive times and therefore more strict measures have to be taken. India has not unwelcomed any refugee, but we have to take care not to compromise with our sovereignty and unity. We have to be more careful in these times.”

Echoing the same sentiments, Pandit said, “I have an issue with the statement that they come and settled here. They didn’t come here, instead they were brought here. Suddenly a group of 10,000 people get settled in a sensitive state like Jammu & Kashmir, that too merely 100 km from the LOC and nobody comes to know of it — is not digestible.

“They have electricity, water, bank accounts and Aadhaar card. They have been found guilty in encounters there. They do illegal business there. Demography has become destiny, the demography decides whether you will be able to stay in that place or not. This is the reason why in more than 60 districts of the country, people are selling off their properties and leaving the place.”

Haider felt that the more humane approach was needed while solving the problem of the rehabilitation of Rohingyas. “It is true that matters get politicized, not only of the Rohingyas but other refugees too. We have received a wave of refugees from Bangladesh and now from Myanmar. The basic principles on which our society is made should be kept away from politics. We should not forget our humanitarian responsibilities.”