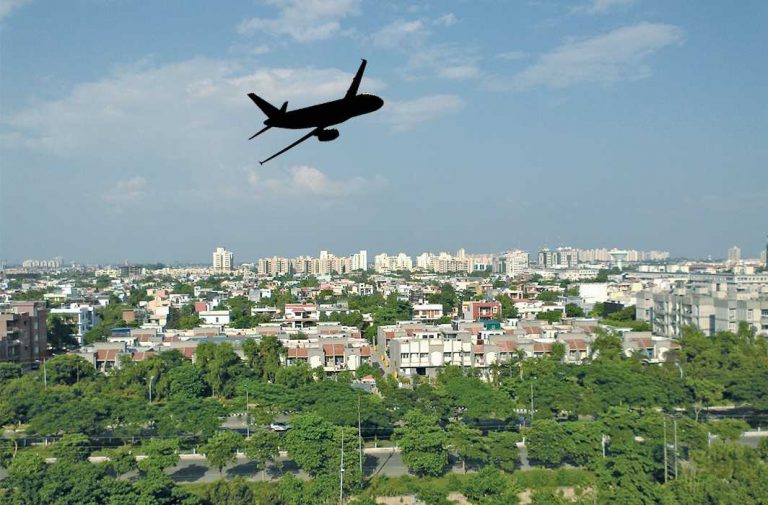 Above: A representative image of a future flight to Greater Noida.

With the government giving the nod for a greenfield airport at Jewar in Greater Noida, UP, the enormous strain on IGI Airport in Delhi will lessen. However, considerable groundwork—starting from acquiring land, inviting bids, short-listing suitable bidders and awarding contracts without favouring any contenders—will have to be completed before the project moves forward. The preparatory work before bidding begins could itself take at least five years, according to a source linked to one of the interested bidders. But the good news is that the first step has been taken. The project had faced many ups and downs with the plan being conceived in 2001 by the Rajnath Singh-BJP government in UP. Then the Mayawati and SP governments tried to revive the project but faced hurdles.

This Public-Private Partnership (PPP) will be undertaken by Yamuna Expressway Industrial Development Authority and is some 72 km from IGI. It is expected to handle 30-50 million passengers per year and will take the load off IGI airport which currently handles nearly 62 million passengers every year. This is expected to go up to 109.33 million passengers by 2024. Therefore, another airport close by will come as a breather. It will also give a fillip to Prime Minister Modi government’s Udan scheme of regional connectivity. With domestic air traffic growing at around 20 percent (from January 2016 till February 2017) as compared to growth after 2011 which was 9 percent, aviation in India looks bright. Already, May saw domestic passengers crossing the one crore mark.

The Jewar project has set some unique precedents. A document on “Policy on Airport Infrastructure” brought out by the government in August 2011 clearly says: “No Greenfield airport will normally be allowed within an aerial distance of 150 kilometers of an existing airport”. The document, strangely, has a provision for projects which violate that clause. It says: “A greenfield airport may be permitted where an existing airport is unable to meet the projected requirements of traffic or a new focal point of traffic emerges with sufficient viability. It can be allowed both as a replacement for an existing airport or for simultaneous operation.” The document also specifies that: “Where it is allowed as a second airport in the same city or close vicinity, the parameters for distribution of traffic between the two airports will be clearly spelt out.”

This naturally begs the question: Who will build this international airport? Former Minister of State for Civil Aviation Mahesh Sharma had once said that the GMR Group, which operates IGI Airport in Delhi, would be preferred for developing the proposed airport. He said GMR Group—the majority stakeholder in the venture that operates the Delhi International Airport—is proposed to be accorded the Right of First Refusal with regard to the new project.

The process of acquiring land for Jewar airport has begun in earnest with reports of Yamuna Expressway Industrial Development Authority chairman Prabhat Kumar saying he would request the UP government to give about Rs 200 crore for expediting the process.

“Once we have the funds, we will be able to start the land acquisition process, which is a lengthy procedure. We have already started the process of changing the land use in the Master Plan-2031,” he reportedly said. He also sought a dedicated team to complete the task of buying the land and resettling farmers.

Though there were reports that land had already been acquired for the project when Mayawati was the UP CM (2007-2012), the next SP government scrapped the project. UP’s industrial development commissioner Anil Kumar Gupta had then said that no work had been done on Jewar airport except the identification of land. “At Jewar we had not acquired land. The government had reserved it,” he had said.

Though there have been official statements that GMR may be the operator to build Jewar, a top official told India Legal that the conglomerate had not acquired any land there.

According to the “State Support Agreement in relation to the Modernisation and Restructuring of the Delhi Airport” between The President of India on behalf of the Government of India and Delhi International Airport Private Ltd. on April 26, 2006, Section 3.4 dealing with Right of First Refusal says: “The Right of First Refusal (ROFR) with regard to a second airport within a 150 km radius of the Airport will be given to the JVC by following a competitive bidding process, in which the JVC can also participate if it wishes to exercise its ROFR”.

This effectively means that GMR is likely to bid for this airport too, leaving other contenders by the wayside. Considering that GMR already runs Delhi and Hyderabad airports while GVK manages Mumbai and Navi Mumbai airports, it means that these two conglomerates have virtually a stranglehold on the sector.

As a senior aviation source points out: “Why should there be a Right-of-First-Refusal clause in the first place? No one is in this business for charity and these companies have made enough and more money from non-aeronautical sources such as shops and hotels near the airport. If I was a bidder, I would join hands with other bidders and we would quote a price lower than GMR’s. How can the government then give the contract to GMR or GVK?”

In the context of Jewar, the Yamuna Expressway Industrial Development Authority has notified 3,000 hectares of land for the international airport. Out of this, 1,000 hectares will be acquired under the first phase which could take 5-6 years and cost Rs 10,000 crore. The entire project is expected to cost Rs 15,000 crore to Rs 20,000 crore. There will be one runway in the first phase and three more runways will be developed subsequently.

One of the major hurdles to be overcome is land acquisition (see box). In the first phase, land will be procured from some nine villages at an estimated cost of Rs 6,000 crore. The villages earmarked for it include Mukeempur, Kishorepur, Banwaripur, Siwara and Rohi.

Authorities could take some acquisition lessons from Cochin airport, which was India’s first PPP airport. India Legal spoke to VJ Kurian, the managing director of Cochin International Airport Ltd (CIAL) and the person who conceived this model in India. In 1995, moves were made to start an international airport in the sylvan surroundings of Nedumbassery, 25 km from Cochin, which then had an airport which belonged to the Navy. Kurian and his dedicated team managed to acquire 1,300 acres from 3,000 landowners with funding from nearly 10,000 NRIs in 30 countries. There were 822 people staying there then.

Kurian said that the acquisition process for CIAL took three years and many sops were thrown in the rehabilitation package for those evicted from the land acquired for the project. “We went in for a negotiated settlement and gave the owners three times the market value of their land. Six cents (435.6 sq. ft. and enough to build a small house) of land was given free of cost to each family which had lost its house, irrespective of the land acquired. The valuation was made without deducting any depreciation.”

The process included other incentives. For instance, those evicted could dismantle the house and take away doors, window frames and steel for reuse. They were also provided with all civic amenities—bituminised roads, street lighting, electricity, drainage and water connections.

Preference was given to these people for unskilled jobs at the airport. Also, those who couldn’t be accommodated in jobs were given taxi permits and allowed to ply from the airport. Today, says Kurian, they earn up to Rs 40,000 a month and it is a permanent job.

While there have been other PPP airports after Cochin such as Bengaluru, Hyderabad, Kannur and Durgapur, said Kurian, most have been on government land and so acquisition was not a problem. Despite Kurian’s best efforts and his dedicated team of 31, of which 5-6 were solely involved with the strategies of the acquisition process, some 2,000 cases were filed against CIAL. After some 36 rounds of discussions and much persuasion, matters were settled and the airport finally took off in 1999.

Kurian said that in the course of this airport project, he had to work under three chief ministers—Congress’ K Karunakaran and AK Anthony and Left’s EK Nayanar. He admits that the full backing of a CM like Karunakaran saw this PPP airport project taking off. “It was a crazy idea then as it hadn’t ever been done before, but he backed me fully.”

In that sense, Jewar should be an easier airport to build as the political dispensation both in UP and the centre—BJP—is the same. The coming up of this airport so close to Greater Noida will also give a fillip to many industries, especially in electronics and real estate. It is believed that significant investments are already coming in from major players like Samsung. The airport is also expected to boost tourism to places such as Mathura, Vrindavan and Agra. The metro service in Noida is also expected to be extended up to Jewar in order to improve connectivity.

What’s more, this airport is expected to act as an aerotropolis where the airport is in the center with cities growing around them, quite like Stockholm’s Arlanda, Amsterdam’s Schiphol and London’s Heathrow. So Jewar airport could be the epicenter for major cities in western UP such as Noida, Agra, Mathura, Meerut, Vrindavan, Moradabad and Bulandshahr.

Private air operators are already gung-ho about it. Rajan Mehra, COO of Club One Air, a major charter operator, told India Legal that it was becoming increasingly difficult to obtain parking slots in Delhi airport. Mehra said: “General aviation, therefore, welcomes the new airport at Jewar. Its close vicinity to Delhi would make it an ideal location for private jets to land and park. We expect the new airport operators to associate more closely with private operators. We could consider bidding for FBO (a fixed-base operator is granted the right by an airport to provide aeronautical services such as fueling, aircraft rental, aircraft maintenance, etc) there. With the huge land base available at the new site, we expect the airport operator to encourage MRO activity and permit companies like ours to build and operate hangers for parking and maintenance of our planes.”

Mehra added that UP was becoming an important state for businesses and several corporate houses were now targeting smaller cities there for manufacturing and selling goods. “We have a large data base of clients who regularly travel to towns there, such as Moradabad, Bareilly, Meerut, Agra, Saifai, Etawah, Kanpur, Varanasi, Ghazipur, Faizabad and Azamgarh. With Agra being closer, tourist charters would also increase,” Mehra said

Such optimism, however, still rests on there being no setbacks in land acquisition and the bidding process which could extend the five-year deadline. In any event, a second airport for Delhi is an idea whose time has come.