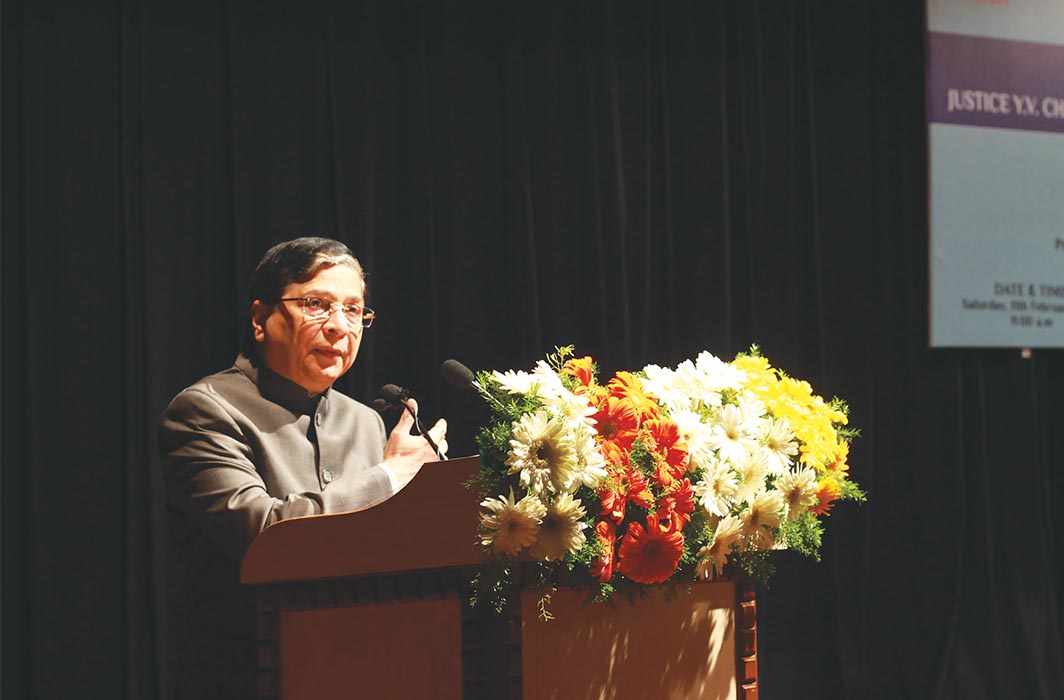 Above: During his 20-year stint on the bench, Justice Misra has passed some path-breaking verdicts. Photo: symlaw.ac

With Justice Misra being designated the chief justice of India, upgradation of legal services and dispensation of justice to the have-nots will be the order of the day

Justice Misra was born into an illustrious family and made a handsome contribution to judiciary as well as public service. Enrolled as an advocate at the Bar on February 14, 1977, he started his career practising in constitutional, civil, criminal, revenue, service and sales tax matters in the Orissa High Court and tribunals before being elevated to the High Court bench. 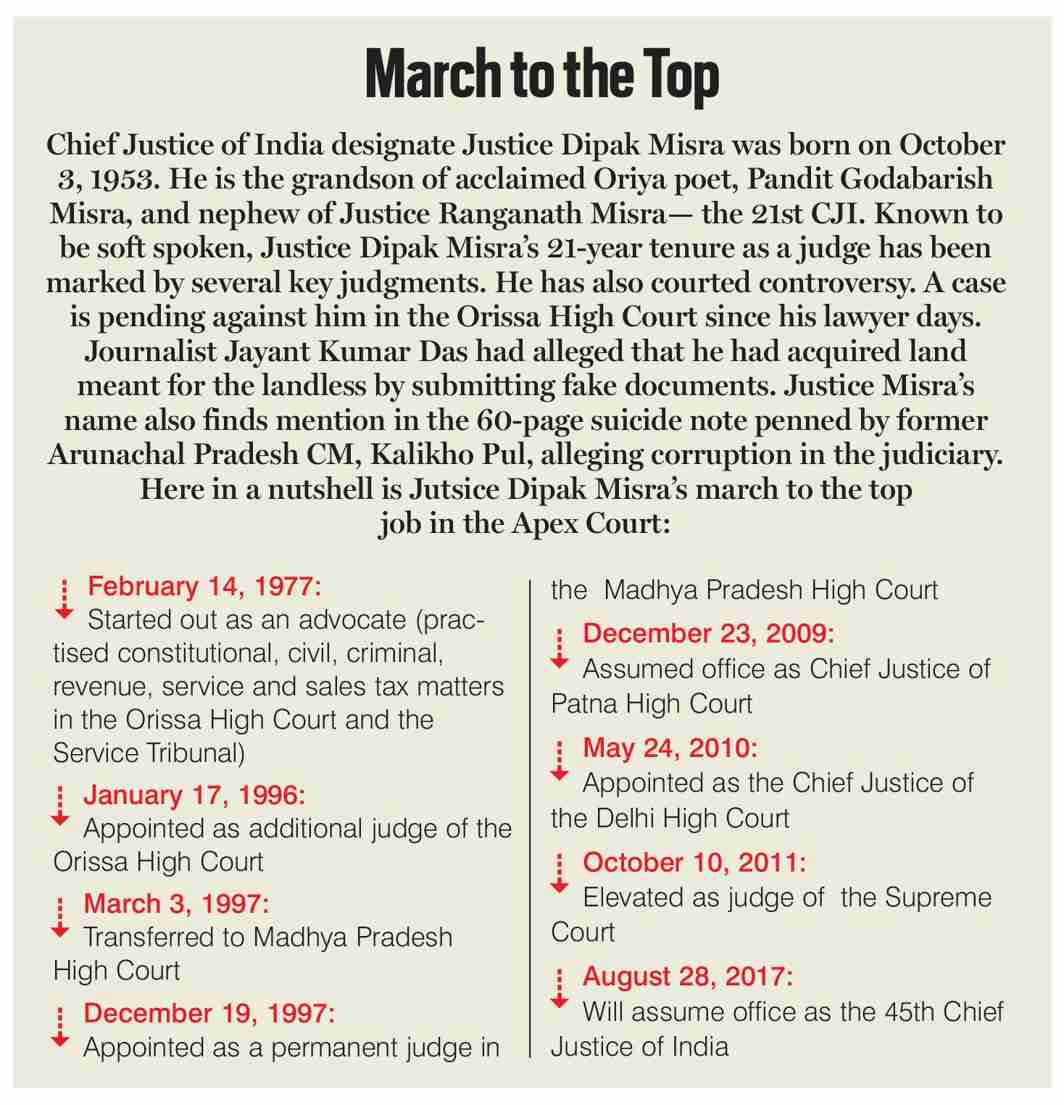 He was elevated to the Supreme Court on October 10, 2011. He performed his service honestly for almost seven years. He is the man behind “Legal Assistance Establishments” or Nyaya Sanyog, which caters to poor litigants and families of those undertrials who are languishing in jails so that they get quick access to justice. He has always shown a concern for providing speedy and qualitative justice for the poor, the downtrodden and weaker sections of society.

The present Chief Justice of India JS Khehar and he have had a perfect understanding and they have moved in unison for the upgradation of the judiciary. During the last one year, perhaps more judges have been appointed in high courts and the Supreme Court than in any previous year. This was achieved in spite of the fact that the vires of National Judicial Appointments Commission Act, 2014 was declared bad in law by the Supreme Court.

One of his landmark judgments was In Court on its own motion vs State, wherein he held that FIRs should be uploaded on the Delhi Police website within 24 hours of their lodging so that the accused can download the same and file appropriate applications before the Court for redressal of grievances.

Justice Misra is a man of impeccable character. Above all, he is a fine human being. He is an outstanding judge, complete in all respects. I have witnessed many a time when he would encourage young lawyers to argue confidently in court. His administrative qualities are superb as well. He is a polite and a well-mannered judge but with a strong sense of conviction, especially while at the cross-roads and facing dilemmas. 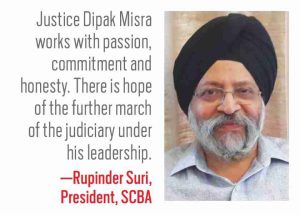 He has shown vision with remarkable clarity of thought and ideas. His ability to understand an issue and resolve the dispute is unparalleled. He also headed a three-judge bench which upheld the Delhi High Court’s verdict sentencing to death four convicts of the December 16 gangrape-cum-murder case in Delhi and also held special hearings on Saturdays for it. “The “brutal, barbaric and diabolic nature” of the crime could create a “tsunami of shock” to destroy a civilised society, said the verdict penned by Justice Misra.

He also headed the bench which, in an unprecedented pre-dawn hearing in 2015, rejected last-ditch efforts by Yakub Memon to get his execution stayed. He is also strict about frivolous litigation. He rejected one such petition that objected to the title of the film, Dhobi Ghat.

It will be difficult to write about his persona in few lines. He is definitely a man who works with passion, commitment, sincerity and honesty. There is hope of the further march of the judiciary under the leadership of Justice Dipak Misra. This will be even while ensuring the highest standards of ethics, probity and dispensation of justice to the have nots, the weak and the poor and also for the welfare of women and minorities. The Bar is sure that the relations between it and the Bench would strengthen further during his tenure.

The Indian judiciary will be in safe hands as Justice Misra will make sure that the ideals of the constitution are upheld.

—The writer is President, Supreme
Court Bar Association of India

The next in Line… 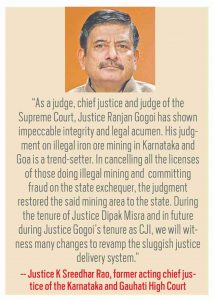 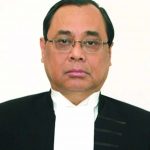 Born to former Assam CM KC Gogoi, Ranjan Gogoi joined the Bar in 1978. He practised at Gauhati High Court before being appointed permanent judge of the same court on February 28, 2001. He was later transferred to Punjab & Haryana High Court on September 9, 2010. He became a Supreme Court judge on April 23, 2012. After Justice Dipak Misra, he is the senior-most judge to take over as CJI and his tenure will begin in October 2018. 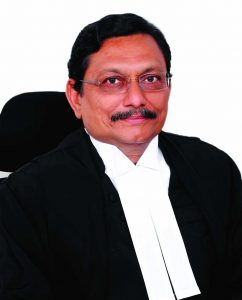 Born to Arvind Shrinivas Bobde, a former advocate general of Maharashtra, he enrolled with the Bar Council of Maharashtra in 1978. He was elevated as additional judge to this High Court in March 2000. In 2012, he was made chief justice of the MP High Court and in April 2013, was made a judge of the Supreme Court. 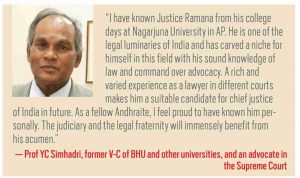 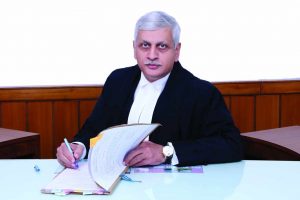 Son of criminal lawyer UR Lalit, UU Lalit joined the Bar in 1983 and commenced his practice in the Supreme Court in 1986. He was designated a senior counsel in April 2004. He was Amit Shah’s lawyer in the fake encounter cases of Sohrabuddin Sheikh and Tulsiram Prajapati, and was special prosecutor for the CBI in the 2G Spectrum case. He became a Supreme Court judge in August 2014. 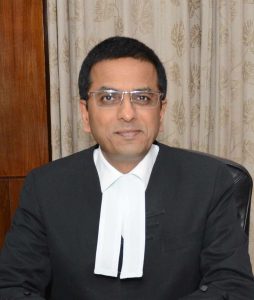 Son of India’s longest-serving chief justice, YV Chandrachud, Dhananjaya Y Chandrachud did his LLB from Delhi University in 1982, LLM from Harvard University on an Inlaks Scholarship in 1983 and Doctorate of Juridical Sciences from Harvard in 1986. He practised law at Bombay High Court and the Supreme Court, and was designated additional solicitor general of India in 1998. In March 2000, he became a judge of the Bombay High Court and in October 2013, chief justice of the Allahabad High Court. In May 2016, he was appointed a judge of the Supreme Court. 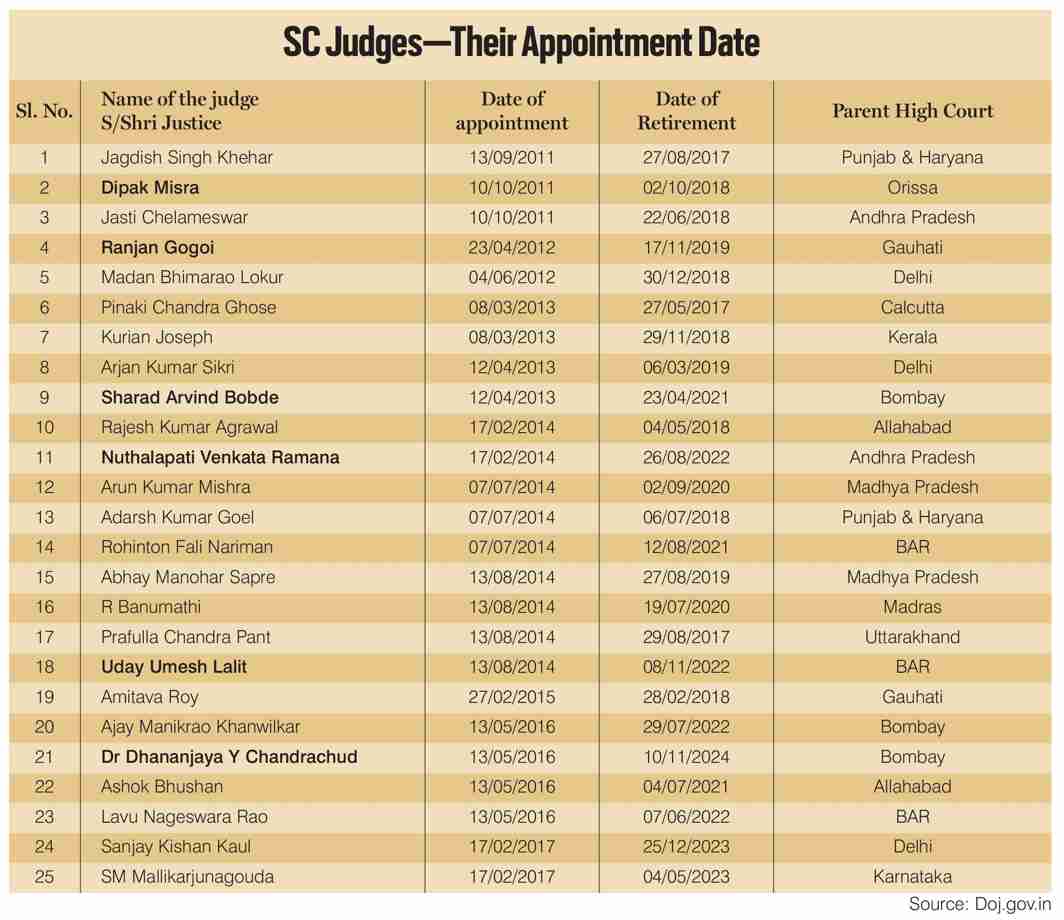