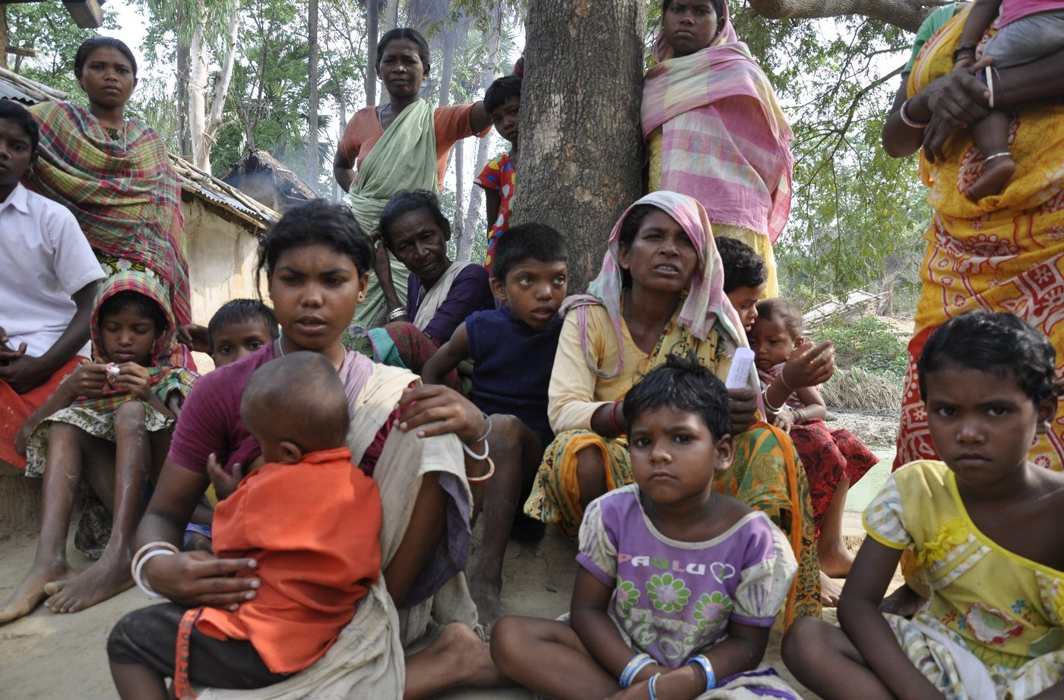 Above: Adivasis are getting deprived of their ancestral land/Photo: PARI

There have been several attempts to deprive tribals of their land in the garb of development, and to make the process quicker and Chhattisgarh’s Land Revenue Code (Amendment) Bill seems to be yet another one

The world over, it is a generally accepted legal principle that all land belongs to the original inhabitants and their descendants. For centuries, they have lived, worked and died on it. They have survived empire builders, looters and missionaries. But then came something they could neither comprehend nor beat: Development. They were told that their land was required for their own development. Roads and industries, mainly to mine their wealth, and move it to markets. They could have its byproducts like schools, shops and consumables.

The Chhattisgarh government has come up with a similar strategy to dispossess tribals of their land. The Chhattisgarh Land Revenue Code (Amendment) Bill, 2017, abbreviated as CGLR, passed by the legislature and awaiting the governor’s nod seeks to introduce an amendment to Section 165 of the Act. The provisions of the amendment include allowing a tribal to sell land at four times the market price to the government.

The purpose, as stated by the government, is of course, development projects like highways and industries. There is also the express purpose of making the process of land acquisition easy.

“The intention is to eliminate difficulties in the process of land acquisition,” Revenue Minister Prem Prakash Pandey told the assembly on December 20 when he managed to manoeuvre the Bill 43-31 despite vociferous opposition by the Congress.

The Bill, like similar acts in other states, prohibits the sale of land of tribals by them to non-tribals. The operational Section is 165 which mandates that tribal land can be transferred only to tribals in all scheduled areas of the state. Buying and selling land to non-tribals is not allowed without the permission of the district collector who is called upon to examine the feasibility, economic conditions and real purpose behind the sale.

Even tribal-to-tribal land transfer is to be sanctioned by him. But it is an easily obtainable permission. However, most collectors desist from signing or permitting any tribal land for general sale as they may be audited for graft at any stage in their careers.

But under the provisions of the same Bill’s Section 59, the government can actually acquire land for developmental purposes by notifying an area and then demarking the land to be acquired.

Hundreds of dams, industries, highways and other projects have been built under the same provisions by governments throughout the country. Initially, the amount paid to farmers was only a pittance as it was proportional to the revenue paid on the land. Later, through agitations and greater awareness, the amount paid was four times the market rate, but there was a catch.

The process was excruciatingly slow and had to move through panchayats, courts and dissenting voices. And this is where the real purpose of the amendment comes in. It saves time. All projects are bank-funded and speedy delivery is the key. If a project time-span stretches, so does the interest. But with the amendment allowing a tribal to sell land at four times the market price to the government, he can be persuaded to take the cash and leave. The responsibility is over and development can go on unhindered.

Revenue Minister Pandey said that the “land can be bought only by the government”. But everyone knows that is only a euphemism. Once land has been bought, it is passed on to the contractor, builder or whoever the government pleases.

The same government brought a similar amendment in 2011 when the ostensible purpose was the establishment of the new capital. Then, Section 59 was amended and a provision was inserted that the New Raipur Development Authority (NRDA) would be exempt from changing the purpose of land acquisition. This means that the NRDA could acquire land for roads and later change it to housing or amusement. And that is what it did.

In a PIL filed in the Chhattisgarh High Court, a set of petitioners/farmers from Rakhi village which came under compulsory land acquisition, demanded that they be paid higher compensation because the land was acquired by the government at Rs 150 per sq feet and then sold to the Airports Authority of India for five times that price. The 2011 amendment may protect the government. But that’s another story.

Under the present amendment, the government has made no promises of jobs. Under the land acquisition route, the loser gets a job at the project being envisaged on his land under the national rehabilitation policy of the union government. This was announced in 2002 and revised in 2005. If the dispossessed, who is referred to as PAP (project-affected person), is ineligible for a job, he gets an additional Rs 5 lakh per acre in lieu thereof. So through the amendment, the government seeks to duck not only the job compulsion but the additional Rs 5 lakh to be paid to the tribal having “sold” his property.

The tribals have not taken this lying down. The Chhattisgarh government was forced to put the Bill on hold last week even as Congress and tribal delegations met the governor, Balram Das Tandon, to persuade him not to sign the Bill.

Leader of Opposition TS Singh Deo told India Legal: “Tribal land is sacrosanct and no attempt should be made to alienate the tribal from his only source of livelihood, especially not with the lure of money since he is incapable of making sensible use of the money. The result is that once dispossessed, he becomes alienated from his environment and becomes a domestic servant.”

The BJP’s own tribal leaders warned the government against the move. The Sarva Adivasi Samaj (SAS) has decided to hold a protest rally during the February budget session to persuade the government to formally kill the Bill. The chairman of the National Commission of Scheduled Castes, Nand Kumar Sai, met RSS chief Mohan Bhagwat to apprise him of the difficulty the party might face in the upcoming assembly elections. SAS vice-president Mohan Singh Tekam, who is a Gond leader, even warned the party from a public stage in Bastar.

As far back as 1908, the British understood the need to protect tribal land and its rampant acquisition by the greedy. The Chotanagpur Land Tenancy (CNT) Act was enacted to make it compulsory for non-tribals to receive special permission from the district commissioner if he intended to buy land from tribals. Under Section 46 of the CNT, only tribals are permitted to sell or buy tribal land and that too comes with several provisos like a minimum land-holding to be left with the seller, and so on.

Though Section 49 of the same Act permits sale of land to non-tribals, it comes with a similar proviso of permission by the district collector with express examination of the purpose of the sale. The proviso had been adopted in the MP Land Revenue Code Bill in 1959 and later in the Chhattisgarh Land Revenue Code (Amendment) Bill.

The CNT Act applies to the Chotanagpur plateau of Jharkhand only, so a similar act called the Santhal Pargana Tenancy Act (SPT) was introduced later to protect the Santhal tribals of Pargana division of Jharkhand.

In 2012, the Jharkhand High Court pronounced that Section 46 applies not only to tribals but also to SCs and OBCs of society. A similar ban now exists on Dalit and OBC land in Jharkhand.

A similar provision existed in UP with regard to Dalits till 2015. Dalits could not sell their land to non-Dalits if the remaining land with them came under 3.5 acres.

The Akhilesh Yadav government promulgated an ordinance allowing such sale, but its present legal status is still unclear as such a change in law would require several permissions from the central government as it appears to override at least 30 central acts.

The CNT and SPT, on the other hand, fall under the provisions of the Ninth Schedule, making it above judicial review, which is not the case with CGLR. Perhaps the time has come to put a freeze on the sale of all tribal land. Or give land for land, just as the tribals want it. Not cash.