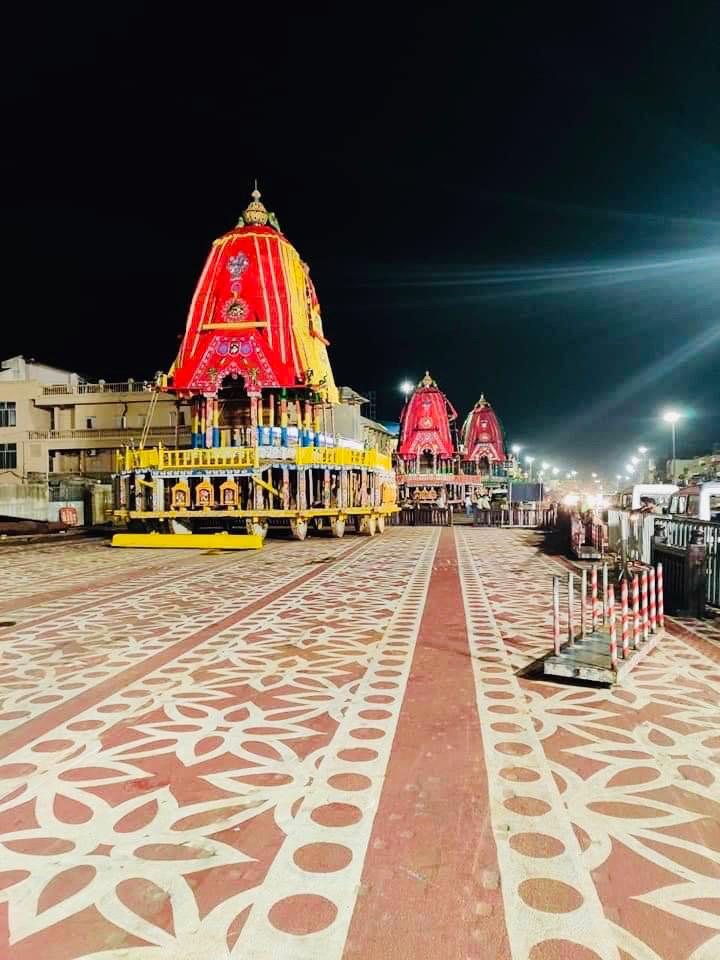 Lord Jagannath Rath Yatra this year in Orissa was held under restrictions after the orders passed by the Supreme Court of India.

On 19th afternoon, I got a call from my colleague Sh. Biswajit Das, Advocate asking me if I was interested in filing the intervenor application for getting the order modified. The first client was ‘Shree JagannathSebayatSammilani, Puri, Odisha’– thecommittee which has the responsibility to take out the Rath Yatra. It was challenging but I agreed. I also got a call from another colleague from Mumbai Sh. Siddharth Murarka, Advocate who asked me to appear in the matter for getting the Rath Yatra allowed, to which also I agreed. Till late night, the applications were drafted and ultimately the application was filed by efiling mode, early in the morning on 20th at around 3 am, by waking up almost whole night. Strange was that, there was not even a single iota of feeling of drowsiness till the application was filed. Since the matter was to be got listed before Monday, i.e. either on Saturday or Sunday itself, a mentioning application was also filed for the urgent listing of the matter.

In the morning of 20th, I was surprised on checking the status and seeing that the application has been cleared by the registry and was registered. Usually the registry mark up the technical defects to be cleared, but our application was free from all that and was taken on record. Another good thing was that our mentioning application was also not rejected as no email was received from the Supreme Court regarding rejection of the mentioning. Since it was presumed that the mentioning is not rejected, hence we were anticipating the matter to be listed on Saturday itself. However, it did not get listed on Saturday.

In the meantime, three more committees approached and three more applications were required to be drafted. So again 20th was also the same hectic day towards the working on the said applications and again it took the whole day for the drafting to be completed with additional set of documents. Since the matters were to be got listed on Sunday, so it was necessary to file the matter before 00:00 hrs. So all the three applications were filed before that time successfully and accordingly mentioning applications were also submitted for the urgent listing of all the matters on Sunday itself as the Lord Shree JagannathRath Yatra was scheduled for 23rd, if allowed by the Court.

On 21st morning, it was good to see that all our applications were cleared by the registry and registered. Also there was no email from the registry regarding rejection of the mentioning, which made us presume that the mentioning is allowed, but when the matter was to be listed, that was not clear. When no information regarding listing came till afternoon, I made a call to the concerned section officer who informed that mentioning is allowed at the end of the Registrar, but for listing, the same has been forwarded to the Chief Justice’s office and no response had come from there.

By evening I received a message that matter was listed on 22nd, i.e. Monday before VC3 as item 31 (Supplementary List). But on checking the causelist, we were surprised to see that the matter was listed before the Court of Chamber Judge (Single Bench). Now the single bench could not have upset the order dated 18.06.2020 passed by 3 judge bench of Supreme Court injuncting the Rath Yatra. I immediately called up the concerned section officer who informed that since Chief Justice is in Nagpur, so matter is not listed before him and they cannot do anything in this regard now. So, another mentioning application was filed by me in the night for removing the said matter from the cause list of Chamber Judge and list it before the appropriate bench, considering the prayers made in the applications and the gravity of the matter and further stating that since the hearing it to be done online, hence there is no restricting in the hearing even if the Judges are out of Delhi. It was further mentioned that in the past, there had been many occasions when Supreme Court has considered such urgent issues on the gravity of the issues involved and has listed the matter even on holidays and midnight. Thereafter, We did not have any other option but to wait and watch.

In the morning of 22nd, the D-Day, I got a call from one of our fellow advocates in the matter to mention again as listing of the matter before the Chamber Judge is of no use and that will not solve the purpose. So I sent another mentioning application for listing the matter before appropriate bench instead of single bench. We all were waiting for the hearing and were anxious as to what will happen. The Court of Chamber Judge was to start at 11:00 hrs. We were informed by the registry at first to do the oral mentioning before the Chamber Judge when the matter is called out. However up till 12:00 hrs., the Court did not start. Suddenly, we got the information from registry that matter has been removed from the Chamber Judge and will be listed before the three-judge bench headed by Chief Justice of India, who will be conducting the hearing from Nagpur. That came as a sigh and relief. We all were happy.Drafting and filing of the cases was not that a difficult job but the listing of the matter for hearing was. Ultimately when the matter was listed before the CJI heading the three-judge bench, that was the first hurdle crossed and all were at least satisfied on this front. I got a lot of messages from many fellow brother advocates and also priests as “thanks”. Then around 13:30 hrs., the bench assembled online from their respective places, when the hearing began, but Hon’ble CJI said that he is just taking the oral mentioning, which he allows and will do the hearing of the matter at 14:00 hrs. Mr. Harish Salve said that he is tied up at 14:30 hrs., so he requested for 14:30 hrs., which was allowed by the Court.

We all were geared up by 14:30 hrs. The bench reassembled at 15:30 hrs. Hearing began. Hon’ble CJI said “we had proposed for having the Rath Yatra in the manner as prayed for in the prayers in the Applications, on 18th itself, but neither the Petitioner, Union of India nor State of Odisha agreed for that on 18th.” On this all three changed their stands. They all agreed for the carrying out of the Rath Yatra, but with strict observation to the guidelines issued by the Govt. of India and the State Government. A question of law was also raised by us regarding the issue of deity laws, which was kept open and Hon’ble CJI said that he is not disposing off the writ petition, but only the applications. It was accordingly ordered and hence, Lord Jagannath ruled over the Injunction Order dated 18.06.2020.

Our question of law is kept open, although not recorded in the order sheet.

The Author is an Advocate-On-Record, the Supreme Court of India.