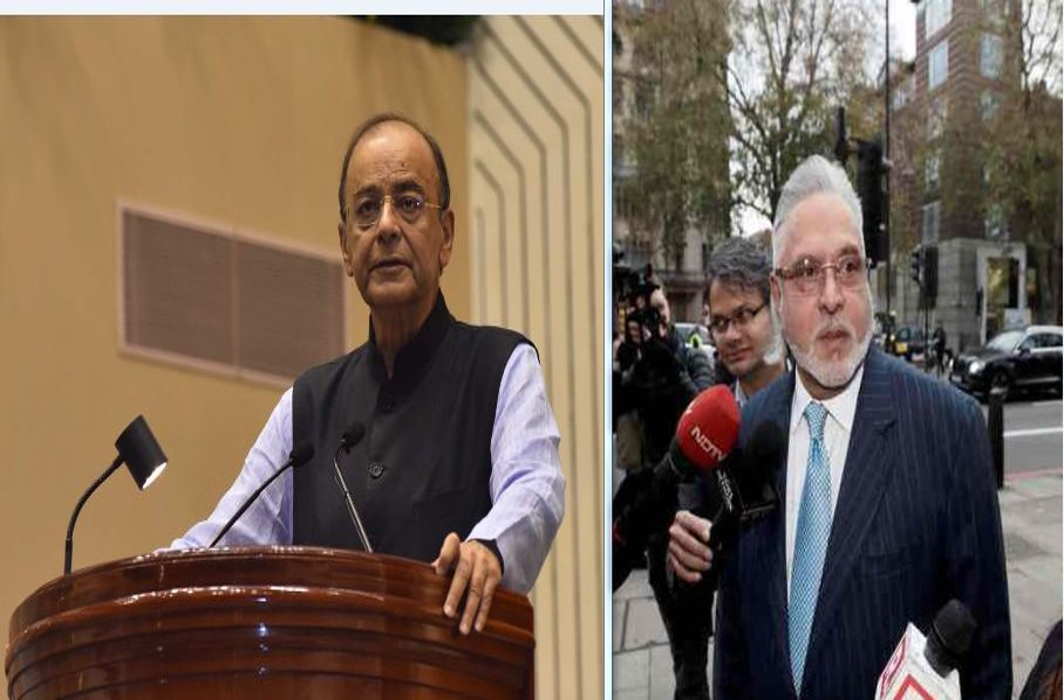 An all out war of words broke out between the Congress and BJP, on Thursday (September 13), over absconding Kingfisher Airlines founder Vijay Mallya’s claim that he had met finance minister Arun Jaitley before leaving the country in March 2016 and offered to settle the massive debts he owed to a SBI-led consortium of lending institutions.

Jaitley’s weak rebuttal of Mallya’s claim was that the fugitive billionaire had “misused his privilege as a Rajya Sabha member” to “catch up” with him in Parliament’s Upper House while he was “walking out of the House to go to my room”.

The finance minister said in a series of tweets: “He (Mallya) paced up to catch up with me and while walking uttered a sentence that, ‘I am making an offer of settlement’. Having been fully briefed about his earlier ‘bluff offers’, without allowing him to proceed with the conversation, I curtly told him ‘there was no point talking to me and he must make offers to his bankers.’ I did not even receive the papers that he was holding in his hand. Besides this one sentence exchange where he misused his privilege as a Rajya Sabha member, in order to further his commercial interest as a bank debtor, there is no question of my having ever given him an appointment to meet me.”

Predictably, sensing the damage that Mallya’s revelations could do to the BJP, especially when the party is gearing up for elections in key states like MP, Rajasthan and Chhattisgarh, the saffron party fielded a slew of its ministers and spokespersons to defend the finance minister.

Union ministers Ravi Shankar Prasad and Dharmendra Pradhan sought to twist the narrative in their favour by suggesting that Mallya’s revelations are coming in after a recent visit of Congress president Rahul Gandhi to London (Mallya has been living in the British capital ever since he fled India). BJP spokesperson Sambit Patra went a step ahead to suggest that Rahul Gandhi and his mother Sonia, and not finance minister Arun Jaitley, helped Mallya. At a press conference, Patra brandished documents and asserted in his trademark style: “we have proof” that Rahul Gandhi helped Mallya, “converted Rs 5000 crore of black money through hawala transactions” with the help of the absconding businessman and that the Gandhis “benefitted” from the tycoon’s Kingfisher Airlines by way of free business class travel.

However, Patra failed to explain why, despite his claims of having proof about Rahul’s alleged hawala transactions and his collusion with a fugitive economic offender, the BJP and central investigative agencies were not seeking to prosecute the Congress president.

While the BJP was busy attempting to own the narrative on the Mallya revelations, the Congress to convened a press conference with its version of “evidence” on the purported meeting between the finance minister and the Kingfisher boss. Asserting that Jaitley was “lying” about his encounter with Mallya, Congress president Rahul Gandhi wondered why the finance minister who has a habit of “writing long blogs” on every issue “did not bother for two years to speak on his meeting with Vijay Mallya”.

The Congress president said that even if the meeting between Jaitley and Mallya was a fleeting one, “the finance minister had prior knowledge that a criminal was going to flee the country but he did not bother to inform the CBI, ED or other agencies and did not ask them to arrest him (Mallya).”

Rahul then asked his party’s Rajya Sabha member, PL Punia, to share an “eyewitness account” of the alleged Mallya-Jaitley meet. Punia said that he clearly remembered that “on March 1, 2016, I was sitting in the Central Hall of Parliament. I saw Mallya and Jaitley talking intimately while standing in the Hall. Then they sat on a bench and continued talking. The meeting lasted for 15-20 minutes. Throughout the (budget) session, this was the only day that Mallya had come to the Parliament and it was to meet Jaitley. Two days later, on March 3, when I read in the newspapers that Mallya had fled the country, I immediately recalled that he had met Jaitley just the other day.”

Punia claimed that in the past two years since Mallya fled, “at every TV discussion and in every byte on the Mallya row I have mentioned about his meeting with Jaitley.” He added that the CCTV footage of Parliament’s Central Hall for March 1, 2016 would have surely captured the discussion between Mallya and Jaitley and should be checked. “If I am proved wrong, I will quit politics,” Punia said, adding however, that if he is proven right, the finance minister should leave political life.

Rahul also wondered why and at whose behest the “arrest notice” issued against Mallya was suddenly changed to an informed notice. He said that this could have been done only on the orders of two people in the government – either the finance minister or Prime Minister Narendra Modi – and demanded that Jaitley must now come clean on the issue and resign from the cabinet.