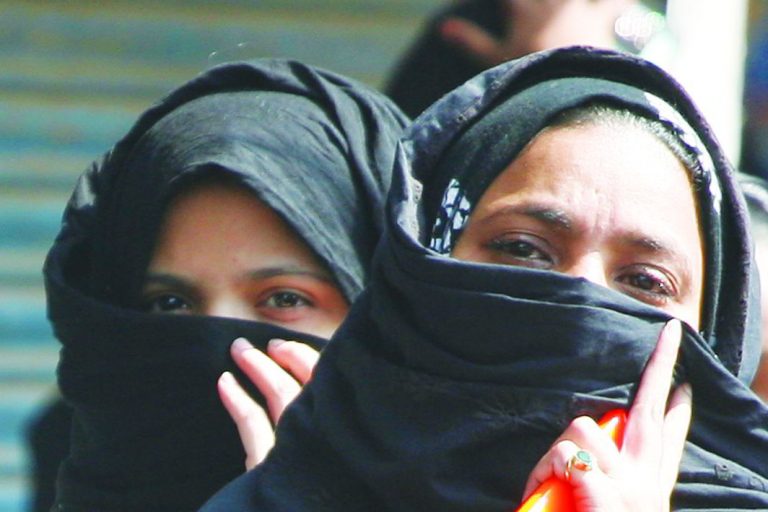 Above: The bill has been welcomed by Muslim women, especially those who have fought a long battle against talaq-ul-biddat, as well as Muslim men advocating reform. Photo: Anil Shakya

Little is known about the Muslim Women (Protection of Rights on Marriage) Bill which will make instant triple talaq a cognisable offence. Meant to be tabled in the winter session, stakeholders are wary of what the provisions will contain and the motives behind it

Four months back, the Supreme Court, in a historic albeit split verdict, declared the practice of instant triple talaq or talaq-ul-biddat among Sunni Muslims “arbitrary, unconstitutional and un-Islamic”. Now, the Narendra Modi-led NDA government is reportedly ready with draft legislation that would make talaq-ul-biddat a cognisable offence. A Muslim husband found guilty of abandoning his wife by uttering that dreadful word three times would, once the bill is enacted, be liable for a three-year jail term and be slapped with a fine.

The draft law seems to be a reform in line with the minority verdict of the five-judge bench of the Supreme Court which had favoured a ban on instant triple talaq through parliamentary legislation and not a judicial verdict. While Justices Kurien Joseph, Rohinton Nariman and UU Lalit had, in their August 22 verdict, imposed an immediate ban on talaq-ul-biddat, then Chief Justice JS Khehar and Justice S Abdul Nazeer had declared the practice unconstitutional but favoured a ban on it through an act of parliament.

The draft bill, only glimpses of which have so far been available through media speculation, has been welcomed by Muslim women, especially those who fought a long legal and social battle against talaq-ul-biddat, as well as Muslim men who have advocated reforms within the community. Yet, the proposed legislation doesn’t seem to be making the kind of waves that were created when the Supreme Court was adjudicating on the matter.

It is believed that the bill will be introduced in the coming winter session of parliament which will be between December 15 and January 5, with just 14 days of legislative business. When Union parliamentary affairs minister Ananth Kumar had declared the schedule for the winter session, he had neither confirmed nor denied the possibility of the draft bill being introduced during this period and had, instead, claimed that if the aspiration of the country was in line with the proposed legislation then “the government is committed to respond to this desire”. 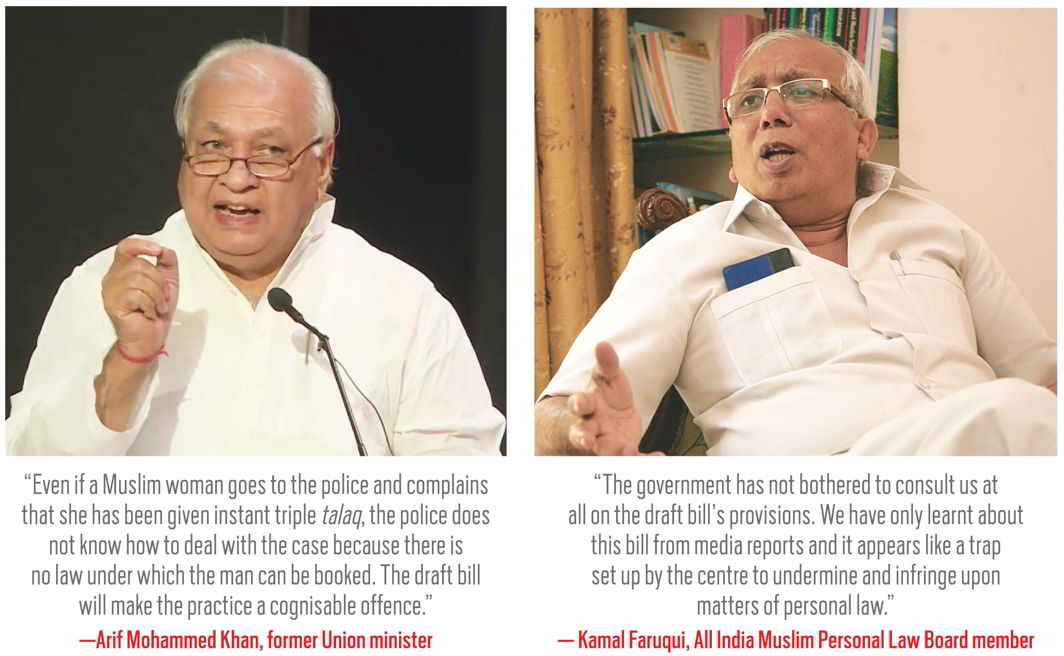 With less than a week left before the session commences, little is known of the exact provisions of the draft bill. From what is known so far, the Muslim Women (Protection of Rights on Marriage) Bill, 2017, will make instant triple talaq a cognisable offence and impose a three-year jail term and fine—the quantum of which is not known as yet—on the Muslim husband for divorcing his wife by pronouncing “talaq” three times. Further, the bill reportedly provides for a “subsistence allowance”—possibly to be awarded by a court of law—to be paid by the husband or his family to the Muslim woman who falls victim to talaq-ul-biddat, while also giving her the option of custodial rights over her minor children.

Interestingly, the bill is yet to be put out for consultation with all stakeholders. It has so far, reportedly, only been sent to state governments for their views, although at least six chief secre­tar­ies—including those of BJP-ruled Madhya Pradesh, Chhattisgarh and Rajasthan—have told India Legal at the time of writing this report that they were yet to receive a copy of the draft legislation.

Senior officials of the Law Commission, the ministries of women and child development, minority affairs as well as the National Commission for Minorities claim to have garnered knowledge about the draft legislation only through media reports. Even Dr G Narayan Raju, secretary for the legislative department under the Union ministry of law and justice declined comment on the exact provisions of the draft bill.

The only people in the government who are privy to the details of the draft bill—Union ministers Rajnath Singh, Arun Jaitley, Sushma Swaraj, Ravi Shankar Prasad and his deputy, PP Chaudhary, who were part of the Group of Ministers that worked on the proposed legislation—were unavailable for comment despite repeated attempts.

The secrecy shrouding the draft bill is quite contrary to the vociferous opposition to instant triple talaq that had come from Prime Minister Modi and his party’s leaders when the Supreme Court was still adjudicating on the matter. Understandably then, the stakeholders who will be most affected by the bill once it is enacted are wary of its precise content and the motive of the centre behind it.

Zakia Soman, co-founder of the Bharatiya Muslim Mahila Andolan, who was one of the petitioners in the Supreme Court demanding a ban on instant triple talaq, told India Legal: “As far as making talaq-ul-biddat a cognisable offence is concerned, we welcome the move but I feel that upholding the democratic norms of public consultation on a bill before presenting it in parliament should be followed by the government. Otherwise, doubts will be raised on the intent of the centre, especially by those who oppose reform within the Muslim community.”

“This secrecy defeats the cause… the government should have been more open about it like the Law Commission was when it began the process of consultation of proposals for a uniform civil code,” Soman said. She added that the government was yet to respond to a draft Muslim Family Bill that her organisation had sent to the prime minister and that this draft had not only dealt with the issue of instant triple talaq but also provided a blueprint for a codified Muslim Family Law.

The All India Muslim Personal Law Board (AIMPLB), which had opposed judicial intervention in banning talaq-ul-biddat but finally told the apex court that it would support an act of parliament that bans the practice, is now waiting anxiously to get its hands on the proposed legislation.

AIMPLB member Kamal Faruqui told India Legal: “I do not wish to comment on the merits or demerits of the bill because the government has not bothered to consult us at all on its provisions. We have only learnt about this bill from media reports and it appears like a trap set up by the centre to undermine and infringe upon matters of personal law.”

Faruqui’s comments are interesting, for they suggest that the government’s bid—although in line with the Supreme Court’s minority verdict—will be opposed by the AIMPLB, though the board had informed the apex court that it favoured an act of parliament on the issue.

Former Union minister Arif Mohammed Khan, who had appeared in the Supreme Court in the triple talaq case and demanded that the practice be banned, feels that the bill is “needed to formalise the Supreme Court verdict through legislation”. 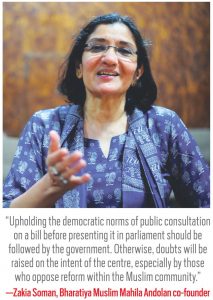 “Despite the SC verdict, talaq-ul-biddat is still being practised. Even if a Muslim woman goes to the police and complains that she has been given instant triple talaq, the police does not know how to deal with the case because there is no law under which the man can be booked. The draft bill will make the practice a cognisable offence and act as a much-needed deterrent,” Khan said. He added that the process of consultation on the draft legislation “can be completed within a short period of time because the Supreme Court has already laid down that talaq-ul-biddat is unconstitutional and illegal. So, there is no question of evolving a consensus now over the legality of instant triple talaq.”

Some sections of the Muslim community wonder whether the draft law will replace the Muslim Women (Protection of Rights on Divorce) Act, 1986. The 1986 Act had been enacted in the aftermath of the Shah Bano verdict of 1985. The then Rajiv Gandhi-led Congress government had projected the legislation as a tool to overturn the Shah Bano verdict which had riled a section of the Islamic clergy and the AIMPLB.

However, in later years, a slew of verdicts by the Supreme Court and various high courts have proved that the 1986 law actually strengthened the position of Muslim women seeking maintenance from their husbands after being given a divorce.

So, will the draft bill being brought by the Modi government replace the 1986 Act? Khan, who had resigned from the Rajiv Gandhi cabinet in protest against the 1986 Act, and Soman believe it will not. “That law dealt only with the issue of maintenance to be granted by a Muslim husband to his wife after the process of divorce had been finalised, while the draft bill deals with the issue of instant triple talaq… the two are completely different in their scope and intent and cannot be read together or as one replacing the other,” said Khan.

Notwithstanding the ambit of the draft bill or the scope of its provisions, what looks like a distinct possibility for now is that the proposed legislation will once again reignite the debate over the attempts of a government to get involved in matters of personal law. Whether the bill is tabled in the winter session or not, it can be safely assumed that voices for and against the criminalisation of instant triple talaq, be it in the political, legal or social spheres, are set to clash again.