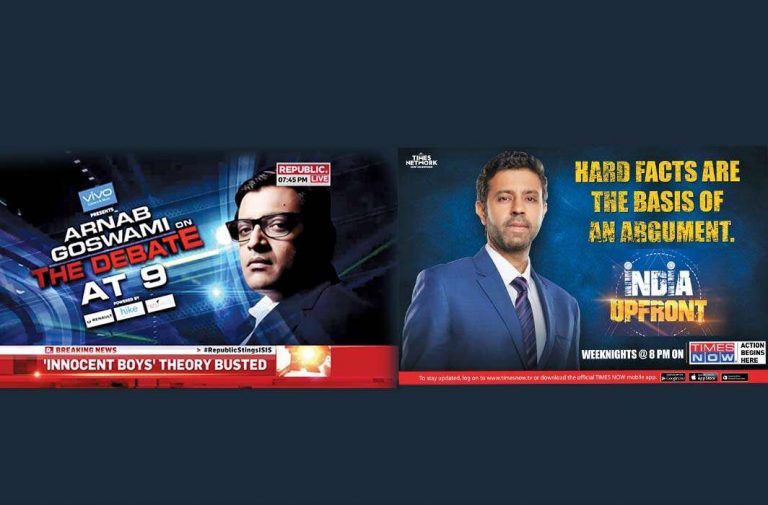 Above:Goswami’s Republic TV’s projection of high ratings must have miffed his earlier bosses at Times Now

~By Dilip Bobb and Rajesh Kumar

Is Arnab Goswami’s Republic TV news or entertainment? Any objective viewer would say it is news as entertainment, based on the ear-shattering verbal histrionics on Goswami’s nightly show, salacious attacks on individuals without bothering about proof, and the visual elements that make it resemble a Bollywood film trailer. That was his USP when he was heading Times Now, but once he left under strained circumstances, and returned as the face of a new channel, it was going to be the same. Within days of Republic TV’s May 6 launch, all hell broke loose in the battle for eyeballs, aka TRP’s, and the marriage of news and entertainment lay at the heart of it.

On May 15, TV Today Network Ltd (which owns India Today and Aaj Tak news channels) filed a petition in the Delhi High Court over the Broadcast Audience Research Council (BARC) TRP ratings which showed that Republic TV had overtaken established channels in a matter of days. The figures showed that it was ahead of its bitter rival and former employer, Times Now, and had left channels like NDTV, India Today TV and CNN News-18 way behind. The irony was not lost on anyone. In the run-up to Republic TV’s launch, Times Now had been running ads and promos declaring that it was Number One and the most watched channel. It must have been hard for Samir Jain, boss of the Times Group, who had vowed to destroy Republic TV and had even obtained a legal injunction stopping Goswami from using his signature phrase “The Nation Wants to Know”, to see his ex-employee’s beaming face, framed by a slick new hairstyle, declaring himself the “Number One news channel in India”.

That’s when the manipulations possible in the broadcast industry began to surface. Apart from the petition, the other channels who are part of the News Broadcasters Association (NBA), complained to BARC and established their protest at the TRP numbers by using something called watermarking. This is a technology used by BARC to allot channels a unique ID, the television industry’s Aadhar card. This is the key element that allows BARC to read a particular channel and measure its viewership. In fact, if a channel does not want TRP ratings, it merely flips a switch and stops watermarking. That is precisely what all NBA members did (Republic TV is not yet a member) as a mark of protest against Republic TV. In essence, the channels were holding the entire system hostage. By pulling out of the BARC system, they rendered it unable to measure and report English news viewership at all.

It seemed like desperate times (no pun intended) had called for desperate measures. It turned out that Republic TV had resorted to multiple placement of the channel on distribution networks (multiple LCN’s, or Logical Channel Number, as it is it is termed). In theory, this means a particular channel can be listed under a single genre only. In practice, it is possible to register in multiple genres and multiple platforms. Here’s the advantage; a viewer flips through English news channels and stops to watch a particular channel for a few minutes. If his/her TV is fitted with a BARC-supplied measuring device, it will record a Television Viewer Rating, or TVR. The viewer then switches to entertainment channels and hey, presto, the same new channel pops up. He/she will pause again, even if in disbelief but it will again register on TVR.  This means that Republic TV was getting double the TRPs compared to the others, albeit by also paying double, even triple, as some claim—that too on several distribution networks. Abhishek Manu Singhvi who appeared for TV Today submitted that Republic TV in violation of TRAI norms was being broadcasted in two different segments—News and Current Affairs and Entertainment. He said: “This, in effect, increases its TRPs as people are watching it on the same platform but on two different channels.”

Singhvi alleged that Goswami was acting cheap but in actuality, it is a costly affair. Such subterfuge would run into a few crores (platforms like Tata Sky, Airtel, etc, charge between     Rs 1.5-2. 5 crore for a single LCN, more if the channel wants prominent positioning). Goswami isn’t worried about finances; his main financial backer is Rajeev Chandrasekhar, serial entrepreneur and Rajya Sabha MP. The ploy may have boosted Goswami’s ratings but it was clearly unethical and in clear violation of TRAI notifications. Goswami, of course, had learnt the tricks of the trade at Times Now while Chandrasekhar also owns regional TV channels down South. In fact, Republic’s launch on a Saturday was also well planned. BARC’s reporting week is Saturday to Friday and by launching on a Saturday, Republic TV got a full week of data which was published on the following Thursday. Goswami may have been fudging the figures but it’s never a good idea in a cutthroat industry to air dirty linen in public. In the courtroom hearings, it turned out that both Times Now and India Today had resorted to the same tactics. The latter was on dual frequencies on each of the 70 cable networks when it rebranded Headlines Today and relaunched it as India Today. By industry estimates, this had doubled its ratings. Times Now had done the same, but justified it as a “defensive manouvre”. Another Times channel, ET Now, had filed a complaint against the Mukesh Ambani-owned CNBC TV18 for inflating their viewership indices using dual feeds.

BARC chose to stay neutral in the battle of the broadcasters. They took the position that they were aware of broadcasters engaging in this practice and claimed that BARC “measures viewership of channels based on their unique Watermark ID, irrespective of the platform the channel is available on or the number of instances within the platform”. It then passed the buck by saying that “BARC India is not the regulatory body for resolving issues concerning multiplicity of LCNs for a channel”. Basically, the ball was passed to the Telecom Regulatory Authority of India (TRAI). The regulatory authority decided to conduct its own inquiry and subsequently, the High Court dismissed the petition as withdrawn, noting that TRAI had submitted that once the investigation is over, appropriate action would be taken against the erring parties as per law and if the petitioner was still dissatisfied, it could raise the issue again. “The NBA is grateful to the TRAI for taking swift measures to stop the malpractices,” said Ashish Bagga, CEO of India Today group and former president of NBA.

While the English news genre is a fraction of overall TV viewership, including within the news category in all languages, advertisers include it in their media planning in the belief that viewers for the genre are comparatively affluent and that English news channels exert an influence way beyond their recorded viewership. Indeed, what the current battle has really exposed is something that applies to almost every aspect of survival in India—the system is there to be exploited by those who have the money and clout to do so. (Chandrasekhar is vice-chairman of the BJP-led National Democratic Alliance in Kerala). What Republic TV has succeeded in doing is to bring the practice of multiple LCNs out into the public domain. TRAI’s intervention has brought down Republic TV’s TRPs, but it is a temporary band-aid solution. Using multiple LCNs provides a sharp spike in viewership for a short while but is not financially viable on a permanent basis. It has been only used so far when launching a new channel, rebranding an existing one, or a change of ownership.

What the nation wants to know is whether the current battle will be resolved, and by whom, and what lies ahead. Realistically, only the courts can come out with instructions that all channels will be obliged to follow. BARC is mostly owned and influenced by the same broadcasters, so it will have very little say. TRAI has issued notifications warning against dual LCNs (the latest on March 3, 2017) but clearly no one has bothered to comply. TRAI has, however, come up with some guidelines which could help. They include:

If implemented—and it’s a big if—the new guidelines could go a long way in reducing the scope for manipulation and misuse. Yet, what Goswami has shown, on his TV shows, and now with the launch of Republic TV, is that he is the genre’s biggest disrupter. The return of his hyper-nationalistic and bombastic TV persona, backed by Chandrasekhar’s deep pockets, has thrown the cat among the pigeons. The NBA, generally a house divided thanks to the dog eat dog world of channel news, are now ganging up against the upstart. Instead of reporting the news, they are now making it. The Battle of the Eyeballs has just begun. Stay Tuned.