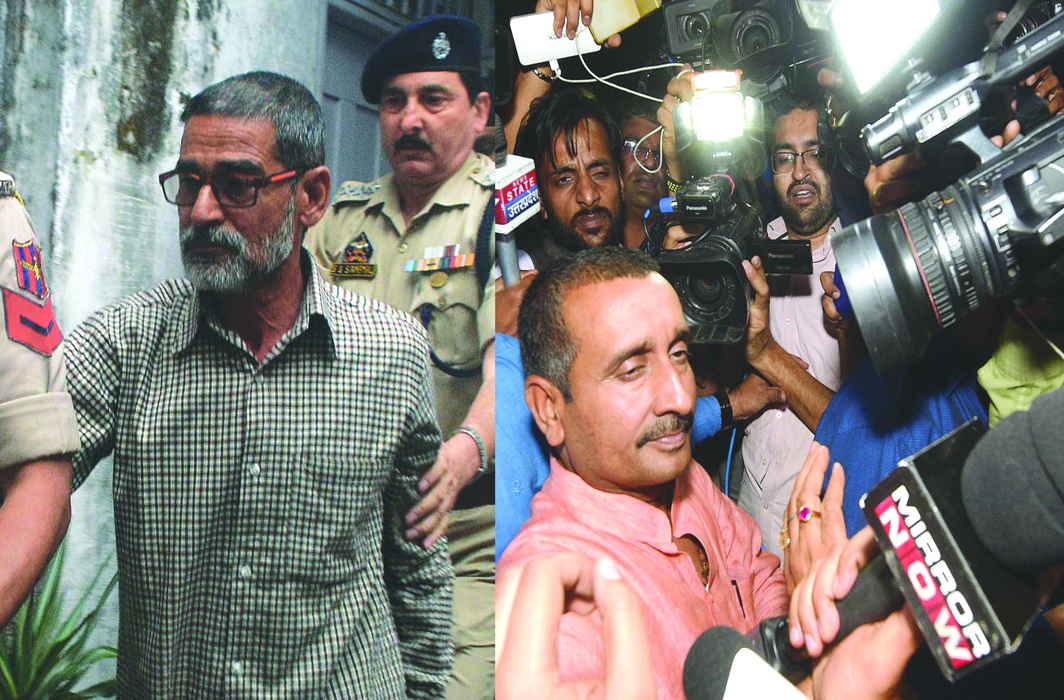 (Left) Sanji Ram, one of the main accused in the Kathua rape case; BJP MLA Kuldeep Singh Sengar has been booked in the Unnao rape case

The proponents of such a database believe it will have a deterrent effect, but similar records have made virtually no difference in the handful of countries where they exist

In January last year, the Delhi police arrested a 38-year-old man during investigations into a case of sexual assault of three minor girls. It turned out that Sunil Rastogi was a serial rapist; he confessed to the police of having targeted nearly 500 children over the last 13 years in Delhi, Uttar Pradesh and Uttarakhand. Sustained interrogation revealed the fact that he had been earlier convicted in 2006 for the sexual assault of a girl and had served six months in jail.

The Raikot police, this month, booked a government school teacher for sexually harassing a Class VIII student. In the suspension notice handed to the teacher, the director of public instructions said that the teacher was accused of harassment by another student in 2016 as well.

A rape takes place every 25 minutes in India. According to the National Crime Records Bureau (NCRB), 2016 saw a spike in cases of rape. There were 10,854 cases of rape in 2015, registered under Section 376 of the IPC and under Sections 4 and 6 of the Protection of Children against Sexual Offences Act (POCSO). This rose to 19, 765 cases in 2016. One study shows that Delhi has consistently led the way with 8,060 rapes recorded during 2001-2013. Those are the recorded ones. A majority of them go unreported.

India has witnessed increased incidents of brutal assault on women and children, since the very beginning of this year. One such horrific incident that shook the nation was the gangrape of eight-year-old girl in the Kathua region of Jammu. It was after the brutal assaults on women and children that pressure began to build up for a national sex offenders registry to be brought in place which would contain personal information of sexual offenders. The registry would acquaint and warn people of the perpetrators around them.

At the forefront of the demand for such a registry is Minister for Women and Child Development Maneka Gandhi. “He (Rastogi) has apparently been caught before in 2006, so if he has been caught before, why is his name not on a national register of sexual offenders? It’s really important to have one register with convicted sexual offenders, and I even say have another one with sexual offenders who are on trial,” said Gandhi to a TV channel recently. “About two years ago, I had asked for in writing that we need to have a national register of sex offenders,” she added. 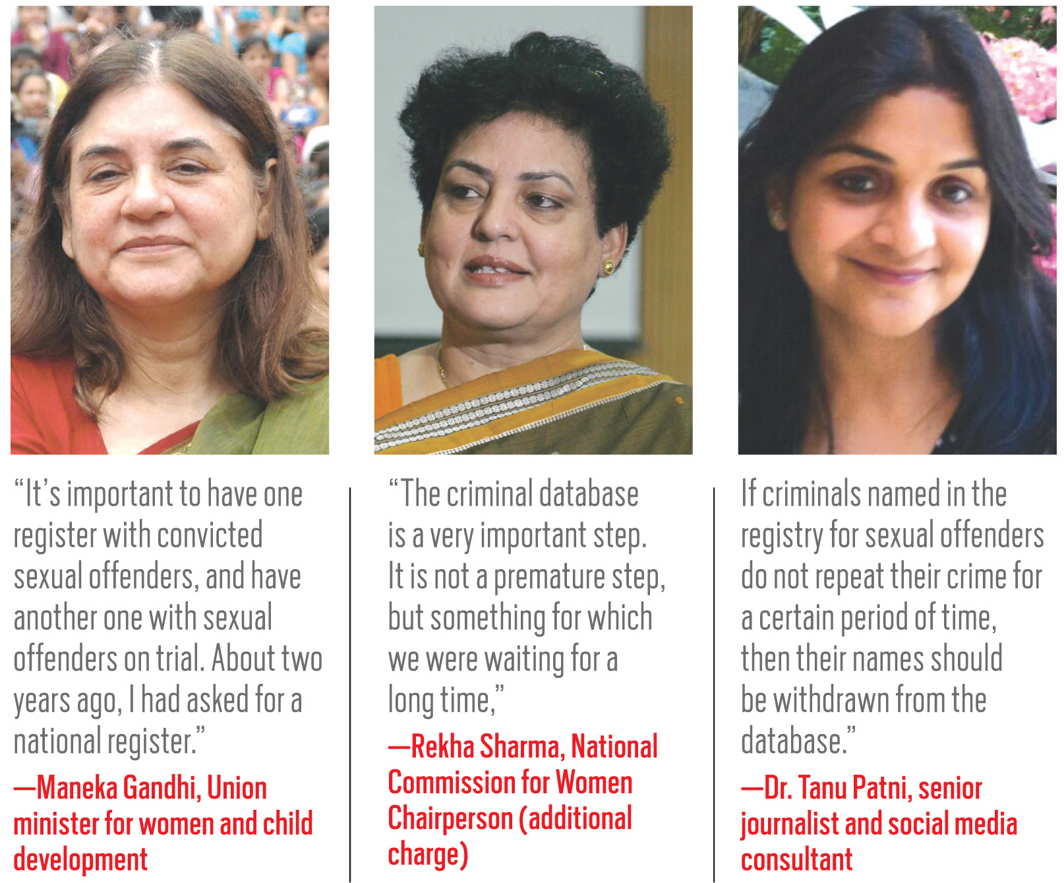 “The criminal database is a very important step. It is not premature, but a step for which we were waiting for a long time,” said Rekha Sharma, National Commission for Women Chairperson (additional charge), while speaking at a panel discussion on the “Right to Fair Investigation and Trial in Sexual Assault and Rape Cases”.

Senior Advocate Vivek Sood of the Delhi High Court also called the sex offenders registry a major step forward. He said that it was happening in advanced countries but in India it would take some time.

Dr Tanu Patni, senior journalist and social media consultant told India Legal that being a mother of a five-year-old daughter, she is worried about the safety of her child and would want to know and be aware of such hardened criminals living in her vicinity.

“We have lived in Uttar Pradesh, where the rapists target homes with female members, rape them and rob the house as well. In such circumstances, there is no harm in knowing beforehand about such criminals living nearby. However, if such criminals do not repeat their crime for a certain period of time, then their names should be withdrawn from the registry,” said Dr Patni.

The registry is being brought into place based on a primary assumption that people should be aware of sexual offenders living in their vicinity, ie., recidivism is the constant and primary suspicion behind preparing such a registry. However, official statistics point towards a reality that is in stark contrast to the popular belief. The 2016 NCRB report says that 94 percent of the victims were attacked by someone they knew. In many of the cases, the sexual abusers were grandfathers, fathers, brothers and close family members.

However, the NCRB is preparing a National Registry of Sexual Offenders, very much in line with Gandhi’s demand. “In India seeing the increasing trend of sexual crimes specially against children exhibiting highest level of bestiality and barbarity in commission of crime since 2012 (evidently in cases such as the Nirbhaya rape of 2012 and more recently the Kathua rape), notoriety of the sexual offender behaving with impunity, there have been series of deliberations & outrage across the country which finally culminated into the decision by the Central Cabinet to establish a National Registry of Sexual Offenders and strengthening of investigation and prosecution and fast tracking of cases,” read the request for proposal (RFP) on the NCRB website.

At present, sexual offenders registry is maintained in countries such as the United States, the United Kingdom, Australia, Canada, New Zealand, South Africa and the Republic of Ireland. In all these countries, sex offenders are required to register themselves along with their residential address and are subjected to additional restrictions regarding being in the presence of minors, living in proximity to a school or daycare centre etc. However, these registries have been heavily criticised by human rights groups.

There have been reports by the Human Rights Watch and the American Civil Liberties Union showing that such a system in the United States has been of no real help when it comes to preventing sexual offences.

Indian registry: Borrowed from the US 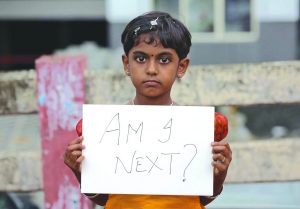 The Indian registry, much like its US counterpart, would classify sexual offenders into three categories—low, moderate and high—based on the degree of threat they pose to the community. This classification indicates lack of research on the part of the Indian government because it has been borrowed as it is from the US Sex Offender Registration and Notification Act (SORNA).

The US Act, too, complies with a three-tier system of registration and notification. There, the Tier I consists of offenders convicted of “least serious offences” that do not qualify as “sex offence” and the convicts are required to register for a period of 15 years. The Indian sex offenders’ registry lists Tier-I convicts as those who are least likely to engage in criminal sexual conduct. The time period for which data will be retained in the registry is also 15 years.

Similarly, the Indian registry mentions period of data retention for Tier II criminals as 25 years whereas Tier III criminals will have to register for a lifetime. The Indian system is identical to that of the US system in most of the aspects.

The convicts listed in the three tiers will be divided into Phase I and II depending on the intensity and gravity of the crime committed.

The national sex offenders’ database will contain the records (including photographs and fingerprints) related to offenders across India who have been—(a) arrested and chargesheeted for a sexual offence; and (b) convicted for sexual offence. These categories will be subdivided into juvenile offenders’ list and adult offenders’ list, and there will be a provision to further divide the list into various other subcategories, such as Pedophiles, etc. The information of the “arrested” and “chargesheeted” offenders will be accessible only to law enforcement agencies whereas the data of the convicted offenders would be open for the public to access.

Vidya from Tulir — Centre for the Prevention & Healing of Child Sexual Abuse, considers this entire exercise of the government a gross human rights violation and an attempt to give oneself a false sense of security. Speaking to India Legal, she said: “Look at the NCRB data and you will get to know the abysmal conviction rate. Even if a person is acquitted, they will still be on the registry, this is a complete violation of human rights. It can be easily challenged in the Supreme Court.”

A more troubling development is that although cases being reported have increased in the past years, the conviction rate is still decreasing. The NCRB data of 2016 reveals that only one in every four cases of rape ends in conviction.

Vidya shared an incident of sexual assault on a minor girl from Chennai, where the victim, since the beginning, had clearly named her assailant to the police but the authorities went ahead and arrested another man—an employee of the man who had assaulted her. Eventually, the man falsely charged by the police was convicted by a fast track court.

“What travesty of justice is that. Now if the sex offenders registry is made, it will have the name of this accused whereas the actual assaulter will roam scot free. My point is, that even if a case is filed and the investigation is done, it can always be manipulated,” said Vidya.

“Many child safety and rape prevention advocates believe that millions of dollars are being misspent on registration and community notification programs that do not get at the real causes of child sexual abuse and adult sexual violence. They would like to see more money spent on prevention, education, and awareness programs for children and adults, counseling for victims of sexual violence, and programs that facilitate treatment and the transition back to society for convicted sex offenders,” says a Human rights watch report.

The registry, along with adult offenders, will also include names of juvenile sexual offenders. This could prove to be even more dangerous as the laws related to juveniles are rather complex in India.

Vidya says most of the cases registered under POCSO are related to elopement. These are cases where the parents of the girl (a minor) get the boy booked under the Act.

“Under POCSO, you have very dangerous laws,” says Vidya. “Another dangerous trend that is observed throughout the country is that the police resort to filing cases under Section 3, 4, 5 and 6 of the Act, which is penetrative sexual assault,” said Vidya. This is because charges under these sections require medical evidence to be presented.

In a recent issue, the National Law University Jodhpur’s Law Review while dwelling on the subject, “Rethinking the Indian Sex Offenders Registry” said: “Sexual violence needs to be tackled from multiple avenues, and not just through crime control measures.

The impact of sexual violence must be understood from a victim’s perspective. Local, state and central law enforcement agencies need to recognise that sexual violence is often committed by those who know their victims intimately.”

Cesare Beccaria, the author of the famous criminology essay, “On Crimes and Punishment”, states that “punishment is neither to torture a man nor to undo a crime already committed. The object of punishment is simply to prevent the criminal from injuring anew his fellow citizens and to deter others from committing similar injuries.”

Clearly, the national sex offenders registry, if it ever becomes a reality, may not have the desired effect.