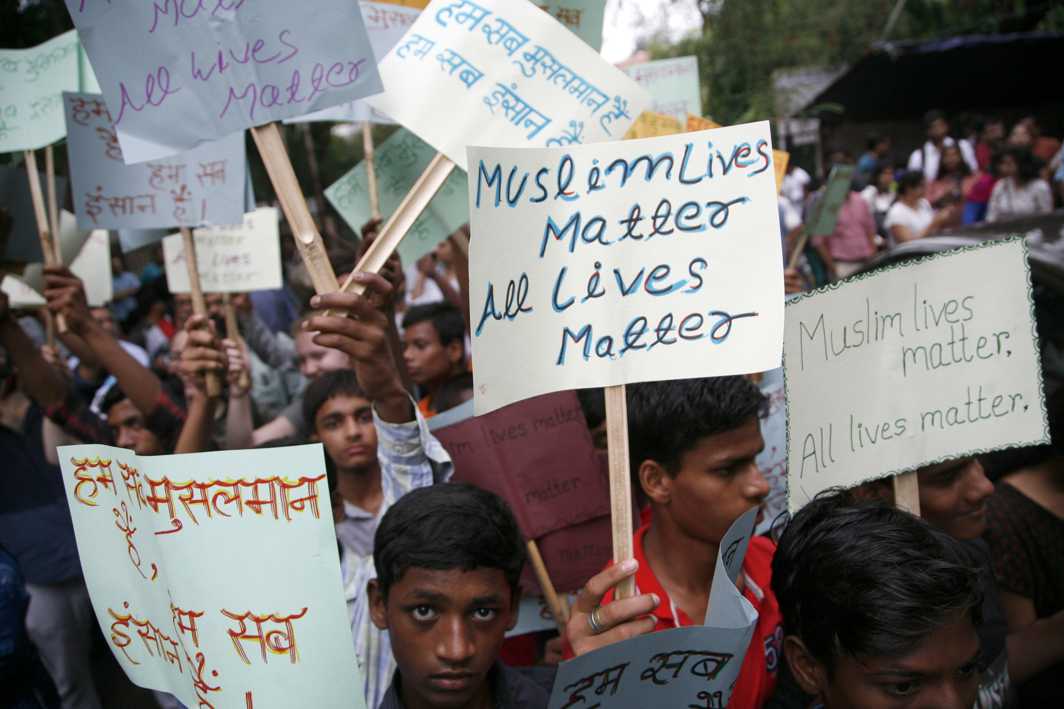 Above: Muslims with placards at the protest event, “Not in My Name”. Photo: Anil Shakya

What started as a Facebook post ended with hundreds of people taking to the streets at Delhi’s Jantar Mantar to join the protest, “Not In My Name”, initiated by filmmaker Saba Dewan. The protests started at 6pm on Wednesday (June 29) and was attended by students, artists, activists and common people of Delhi along with the family members of 16-year-old Junaid, who was killed on June 22 in a Mathura-bound train.

The protest made headlines around the country and even in the foreign press. The immediate effect of the protest was the breaking of months-long silence by Prime Minister Narendra Modi, who said on Friday (June 29) that killing in the name of an animal sacred to the majority Hindus was wrong, a comment that came seven days after the horrific killing that moved the conscience of the entire country.

“Killing people in the name of ‘gau bhakti’ is not acceptable,” Modi told a crowd at the centenary celebrations of the Sabarmati Ashram, according to agencies. “No person in this nation has the right to take the law in his or her own hands.”

Till Thursday, there had been not even an acknowledgement of the killing of the 16-year-old Junaid by the prime minister, neither of any other cow-related killing so far. There have been 28 cow-related killings from 2010, 97 percent of which were after the NDA came to power in 2014, according to a report by India Spend.

Reacting to Modi’s comment senior Congress leader Renuka Chowdhury said: “I am glad that the Prime Minister finally came out and said something, but it is not enough. We have to put our money where our mouth is. We want action. The ground reality is something else. What is the government going to do? What action plan do they have? Are we to live in terror?”

At the Jantar Mantar on Wednesday, the protest was observed to register the people’s anger over the incessant lynchings of Muslims by cow and beef vigilantes. Apart from Delhi, protests were held in 11 other Indian cities of Allahabad, Bangalore, Chandigarh, Chennai, Jaipur, Kochi, Kolkata, Lucknow, Mumbai, Patna and Thiruvananthapuram.

More importantly, it received primetime coverage by all major television news channels, including foreign channels. Back from another of his hurricane international tours, Modi, at least, reacts when his image is in danger of being tarnished.

Sources have told India Legal that in Amsterdam Dutch Prime Minister Mark Rutte had mentioned to Modi that a lot of NGOs and parliamentarians had petitioned him about lynchings in India.

The event in Delhi witnessed an emotional moment when Junaid’s brother Mohammed Asaruddin read out a letter, called “letter to his mother from heaven”, written on behalf of Junaid. It read: Dear Ma, I am home. Mother you lied when you said Hindus and Muslims are brothers because how can a brother watch his brother being killed and do nothing to save him. I am alive now. Here there is no fear of marauding mobs. Yours, Junaid.”

People could be seen crying uncontrollably in the protest after Asaruddin read out the letter. He quivered as he read out the letter against the backdrop of ‘lynch map of India’, a map made on the dais spotting the states in red where mob lynchings have taken place since 2015.

Works of revolutionary poets Faiz Ahmad Faiz and Sahir Ludhianvi were recited in the event. Veteran journalist Vinod Dua too read out a couplet by Faiz in the event. Actor-dancer Maya Rao performed on an act she composed for the event.

“Junaid was my brother, my fellow countrymen, I have seen Bharat Mata weeping in the eyes of his mother”, read a placard in the protest. The other one read, “hum sab musalmaan hai, hum sab insaan hai (We all are Muslims, we all are humans)”.

Although the protest was attended by hundreds, it is not sure if the common people participated in substantial numbers. The place was filled with students, lawyers, educationists, activists and artists. Muslims wearing traditional attire with a black band could also be spotted in the protest.

Although many families joined the protest with their children, still the presence of the common public was missing. Even the auto-drivers dropping the people to the venue could be seen asking their customers the issue behind the protest. Some performances were still due as people left due to rain.

Although the intention and the motive behind the protests were genuine but lesser participation suggests that people are yet not aware of the cynical lynchings taking place across the country. This is the same Delhi which had turned out in huge numbers during the Nirbhaya rape tragedy. But such a turnout of people was missing in this protest.

The protest was also criticised by both left and the right groups for its idea and execution. Still the protests could be marked as a beginning of resistance against mob lynchings. 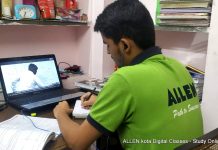 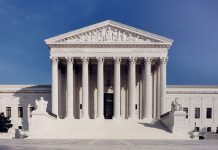 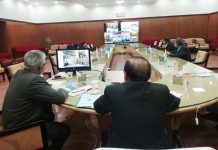