Though the cabinet has cleared this proposal, there are fears that it will compromise the sanctity of the election process. Can the Election Commission ensure that the proxy casts the ballot according to the elector’s wish or that a political party doesn’t influence the decision?

The recent decision of the cabinet to allow Non-Resident Indians (NRIs) to cast their votes in elections —federal and provincial— through a proxy chosen before each new poll appears troublesome. It isn’t something that envisages a simple change of policy but a change in the way policymakers are elected. The cabinet’s decision—which will still take months, perhaps more, before it can actually become law and be put into practice—has triggered a debate among stakeholders, political and others, on whether allowing this proxy voting compromises the sanctity of the voting process. This facility was hitherto granted only to Armed Forces personnel.

So, does the cabinet’s move to allow some 1.16 crore NRIs proxy voting have any mechanism to ensure that the proxy casts the ballot according to the elector’s wish or that the elector isn’t unduly influenced by political parties to vote in their favour? It appears that the answer, for now, is No.

KF Wilfred, principal secretary, Election Commission of India, told India Legal: “The issue at hand was whether or not we can give the right to franchise to over one crore Indians living overseas who continue to retain their Indian citizenship in a manner which allows them to also practice that right conveniently. The government decided that proxy voting was the way forward. But yes, it could compromise the sanctity of the voting process because we will have to assume that the proxy is voting according to the wishes of the elector.”

And though their numbers may not seem sizeable, the fact remains that in states such as Punjab, Gujarat and Kerala with a high population of NRIs, they could well swing the votes.

Wilfred was part of the Committee for Exploring Feasibility of Alternative Options for Voting by Overseas Electors that was set up in 2014 on the instructions of the Supreme Court. He said that the decision to allow proxy voting—one of the options put forth by the Committee—was taken as the choice before the Commission was “to choose between no voting rights for NRIs and involving them in the election process”.

But then, Wilfred’s assertion is only partly correct. Former Chief Election Commissioner (CEC), SY Quraishi, in an article for The Wire, pointed out that in 2010, the then Prime Minister, Dr Manmohan Singh, had announced at the 8th Bharatiya Pravasi Diwas that from the following year, NRIs would be able to vote—an announcement that “came out of the blue for the EC”. Quraishi said the government amended the Representation of the People Act, 1950, in February 2011, adding a new section, 20A, that allowed NRIs to register in the electoral rolls of their constituency if they had not taken citizenship of any other country. But unlike the proxy voting system, the amendment needed NRIs to personally travel back home to their constituency in India to cast their vote.

It remains unclear whether the Modi government would do away with the option of allowing NRIs to cast a “direct vote” and replace it entirely with the proxy vote system. But what is certain is that the RP Act will need to be amended once again. And this is where political players opposed to the cabinet’s proposal come in.

The Committee’s report on voting rights for overseas electors pointed out that the Congress, Left parties and the Bahujan Samaj Party were all against granting proxy voting rights to NRIs. The Congress is also likely to reach out to more parties for a united opposition to any attempt for amending the RP Act.

Former Congress MP and party spokesperson Manish Tewari said: “Allowing proxy voting for NRIs will have a whole set of problems, which is why we didn’t favour it even when we were in power. Veerappa Moily (then minister for Law and Justice) initiated the system of allowing overseas Indians to get enrolled as voters and come to India to cast their votes in elections. If the government now wants to bring in proxy voting, it will first have to move an amendment to the RP Act in parliament and parties opposed to the move, like ours, will ensure that the amendment falls.”

How many of my fellow countrymen know that most of 1.4 million Armed Forces personnel have not been voting in our national elections? During my more than 28 years of my service in the army, only postal voting system existed. It was so poorly organised that I received postal ballots only twice in my entire service. Nobody really cared about it; not even our apolitical Armed Forces. Most of the troops deployed in remote areas along the border or fighting insurgencies probably had more pressing priorities.

However, the proxy voting system for the Armed Forces was introduced on September 22, 2003. But, the bureaucratic procedure discouraged many soldiers from using it. It had all the weaknesses of the postal ballot system, with added chances for political mischief considering soldiers served in far-flung areas with poor connectivity.

In 2009, stung by growing feelings of being shortchanged by successive Pay Commissions, the Armed Forces probably realized that unless they exercised their voting power, they would continue to be sidelined by policymakers. In January 2009, the media reported that the chiefs of the army, navy and air force encouraged their personnel to register themselves in the Election Commission office in the area of their posting.

The “One Rank One Pension” by veterans probably helped add value to their vote. But it was only on March 24, 2014, that the EC decided to permit service personnel to vote at their place of posting in the general elections by treating them as ordinary citizens. It took 70 years after Independence for the nation to recognise service personnel as ordinary citizens! Truly Mera Bharat Mahan!

Tewari also refers to an argument that was articulated by several critics of the proxy voting proposal, including Quraishi and former CECs N Gopalaswamy and TS Krishnamurthy. He said: “If you can allow proxy voting for NRIs on the ground that they are unable to exercise their franchise because they are miles away from home, then why not have the same provision for lakhs of migrant workers within India who face the same problem?”

He added: “You cannot have different strokes for different categories of people… this would force someone to challenge the move in a court of law over rights of a citizen.”

Asked if the EC was prepared to let migrant workers in India have the same voting rights as NRIs, Wilfred said: “As of now, that is not possible because we don’t even have a mechanism to find out how many migrant workers there are across India…. Perhaps with Aadhaar and other means of forming a centralized Citizen Registry and databank, this may be possible but I don’t see it happening anytime soon.”

In fact, even the NRIs for whom the government is willing to take the risk of what Wilfred said was “compromising the sanctity of the voting process”, don’t seem too enthused by the proxy voting proposal.

Thomas Abraham, chairman of the Global Organisation of People of Indian Origin, said: “While we welcome the move to help NRIs to vote in elections, it would have been better if we could vote directly instead of using a proxy. A direct vote would be more transparent and people won’t have the fear of their franchise being manipulated.” Abraham was among several NRIs in Washington who recently participated in an interaction conducted by Deputy Election Commissioner Umesh Sinha to discuss the proxy voting proposal. He said that the EC should have explored the possibility of allowing NRIs to vote at Indian Missions in their countries or using internet voting further. 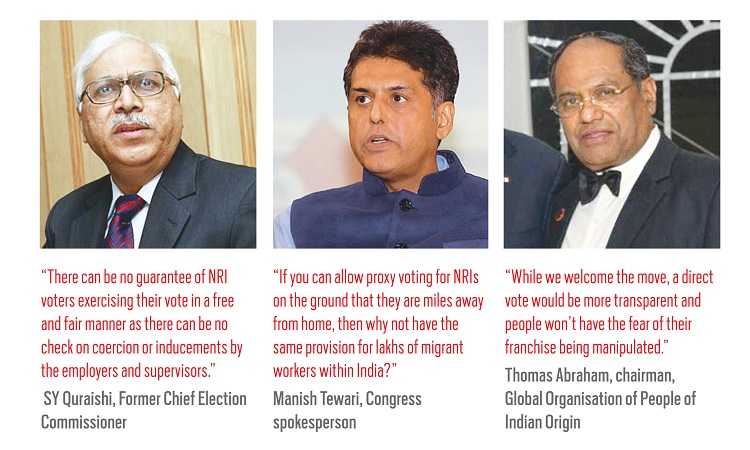 But Wilfred said that allowing Indians to vote at Indian Missions abroad was not feasible. “We had consultations with the Ministry of External Affairs about this but they said that several missions don’t have adequate space to set up polling booths. Manpower too would be an issue. Besides, diplomatic enclaves in most foreign countries aren’t easily accessible for common people,” he said.

A senior official said on condition of anonymity that a view in the EC was that if India allowed NRIs to vote at its missions abroad, “several countries where democracy isn’t absolute or those which have military rule or a sort of monarchy wouldn’t appreciate the idea of their people watching citizens of some country lining up to vote”.

The manner in which the proxy will be selected remains unclear. “As of now, we haven’t chalked out any parameters for who can be a proxy. Perhaps the law ministry is giving it a thought. For now, all we know is that the elector must first register as a voter, following which he has to appoint a proxy who must be a registered voter in the elector’s constituency. Once that is done, the elector can inform the proxy of who he wants to vote for. We hope the proxy will cast the vote as instructed,” said Wilfred.

The proxy for an NRI will have to be appointed before each election, unlike proxies for Armed Forces personnel who are appointed till such a time when the right to proxy is revoked by the elector. However, the NRI can choose the same person to act as proxy for every election.

Wilfred said that no change was proposed for the voting rights of Armed Forces personnel. “They have the option for proxy voting as well as voting through postal ballot. But if an elector chooses one, he can’t opt for the other and if a proxy fails to cast the vote for some reason, the elector can’t say that he wants to vote through postal ballot. There will be no change in this system as of now,” the EC official said.

There’s much that the EC, and the Modi government, still need to think about on proxy voting by NRIs. Quraishi advised: “The EC has always treaded with caution…. Reckless adventurism in as sensitive a matter as elections is fraught with serious consequences.”

But then, as Wilfred grudgingly admitted: “When the then Union government had decided to allow NRIs to vote, the EC was opposed to the move…. We just had to follow because the government unilaterally made enabling changes in the RP Act. Now we simply have to keep improvising.”

Chances are that the Modi government will prevail over the EC’s reservations on proxy voting. Whether that will be good for democracy or not, is a different matter altogether.