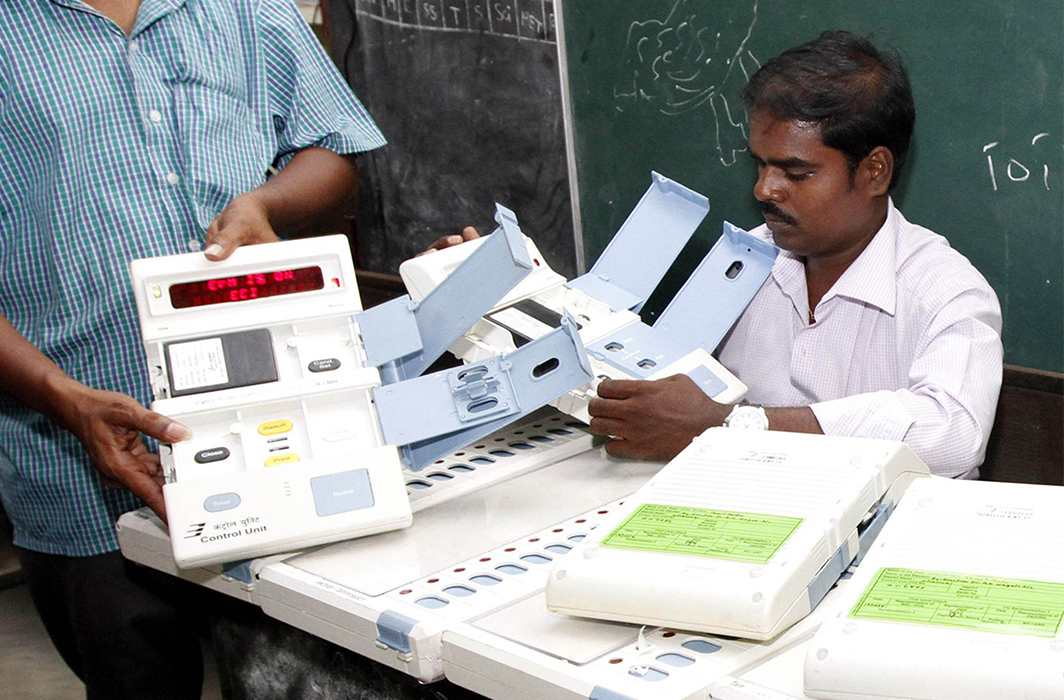 Above: Officials inspecting the EVMs before elections. Photo: UNI

Why would anybody steal an EVM if not to tamper with it? EC’s claim of EVMs being tamper-proof sounds hollow

While the Supreme Court bench of Chief Justice JS Khehar and Justice DY Chandrachud has already issued a writ of mandamus (see IL story here ) to the Election Commission of India (ECI), directing it to have the quality, software/malware and the hacking possibility in its EVMs examined from a reliable electronic laboratory or scientist and software expert, it has now come to light that there is yet another, simpler, method to tamper it. Just steal it before elections, tamper and replace.

A bunch of documents accessed under the Right to Information (RTI) Act from Gujarat, Madhya Pradesh and Chhattisgarh shows how ahead of various assembly and general elections since 2003, several incidents of these machines being stolen were reported.

The RTI documents accessed by Congress activists Tehseen and Shehzad Poonawalla raise one pertinent question—if EVMs can’t be tampered with, then why are they being repeatedly stolen? Furthermore, even those police complaints that were registered against specific individuals, including three Election Commission officials in Gujarat, on the charge of stealing the machines, have failed to move beyond police boundaries and in courts.

Earlier this year, the reliability of EVMs had emerged as a major political debate when during an inspection of the machines by the state’s chief electoral office Salina Singh days before a bypoll for the Ater assembly seat in Madhya Pradesh’s Bhind district, it was found that the machines were registering votes in favour of the BJP, irrespective of which party it was actually being cast for.

The Poonawalla brothers also shared the documents on micro-blogging website Twitter but curiously while #EVMStolen was the top trending story for several hours on the site, receiving over 20,000 tweets and re-tweets, it suddenly disappeared from the Twitter trends list by Friday afternoon.

The RTI documents, however, raise severe doubts on the tall claims put forth by the EC in its affidavit filed by the commission’s director (law), Vijay Kumar Pandey before the apex court.

Take for instance the documents accessed from Gujarat. In a correspondence dated July 21, 2008 the then chief electoral officer of the state, Vinod Kumar Babbar had written to the then Secretary, Election Commission of India, informing him of EVMs going missing from a training class of polling officials in Jamnagar district ahead of the 2007 Gujarat assembly polls.

Babbar’s letter—certainly the most damning of the RTI documents from the three states—names three trainers, Jitendra Valji Kalawadia, Shantilal Rajkotiya Patel and Suresh Kumar Nandasana, and says that they had “behaved in a careless and doubtful manner… the persons appear to have become encouraged to misuse and take away the Electronic Voting Machines”.

A simple perusal of Babbar’s comments in the letter—“encouraged to misuse and take away the EVMs”— beckons the question: what is the possible misuse of an EVM that an official can indulge in if not to tamper with it?

Babbar also states that “on December 1, 2007, after the first batch of training was over, the trainer Jitendra Valji Kalawadia handed over the EVMs to others during the recess time and went away for lunch. When he returned the machine was missing”.

An investigation carried out by the Jamnagar police into a complaint filed by Babbar’s office against Kalawadia and other polling officials led to the questioning of 56 trainers following which lie detectors tests were recommended for Kalawadia, Patel and Nandasana at the forensic science laboratory (FSL) in Gandhinagar.

Babbar’s letter, that was sent to the Election Commission some six months before he abruptly resigned from his post as Gujarat’s chief electoral officer and took voluntary retirement from the administrative services, says that the three officials had undergone multiple lie detector tests and that “the answers given by Kalawadia were not found true by the FSL” which in turn suggested a further line of inquiry.

Accusing the Election Commission of “misleading the Supreme Court” on the reliability of the EVMs, Tehseen Poonawalla told APNLive, India Legal’s sister concern: “The documents show how security of EVMs has not been ensured by the officials concerned ahead of polls in not one but at least three states during successive Assembly and Lok Sabha elections… If an EVM can’t be tampered with, why would anyone—especially a polling official as is the case with Jamnagar in Gujarat—steal the machine?”

Tehseen said that he wants to know from the EC about the action taken against Kalawadia and other officials from Jamnagar who were named in Babbar’s complaint. Also, he now intends to file a petition in the Supreme Court backed with the RTI documents as potential evidence of how security of the EVMs has been and can be compromised.

Asked whether he had selectively sought information regarding theft of EVMs from BJP-ruled states, Tehseen said: “I wanted the data from across the country but the EC has not been very forthcoming. I am hopeful that in days to come I will be able to access more documents about EVM theft from other states too since I am aware of a few specific cases that don’t find mention in the documents given to me so far. But, that the documents presented are all from BJP-ruled states is a matter of pure co-incidence”.

The cases from MP and Chhattisgarh

In a letter dated April 27, 2017, SS Bansal, the joint chief electoral officer of Madhya Pradesh informed Arvind Anand, EC secretary that multiple cases of EVM thefts had been reported from the state’s Rewa and Bhind districts in elections that took place in 2003, 2008, 2014 (for the MP assembly) and 2009 (Lok Sabha). The maximum cases of EVM theft were reported from Bhind during each of the Assembly elections. Though in most cases the Bhind and Rewa police had registered cases of loot and theft against unidentified miscreants, even in cases where specific individuals were named and EVMs were recovered from them, the police either failed to achieve a conviction or hearings in the case took an extremely sluggish pace. No comments have been made by Bansal on whether the reason for the EVM theft was investigated or revealed.

The Chhattisgarh electoral office on the other hand has, in a letter dated April 26, 2017, informed EC director Mukesh Meena, that though a large number of EVMs had been stolen from various blocks of the state’s naxal-hit Dantewada region during the 2003 and 2008 assembly polls and again in the 2004 and 2009 Lok Sabha polls, those responsible for the loot were always Naxalites who wanted to disrupt the election process.

Repeated attempts for a comment on the RTI documents from officials of the Election Commission of India went unanswered though a senior official, on condition of anonymity, said that the commission was presenting its case before the Supreme Court and its submissions should be taken as the EC’s version. 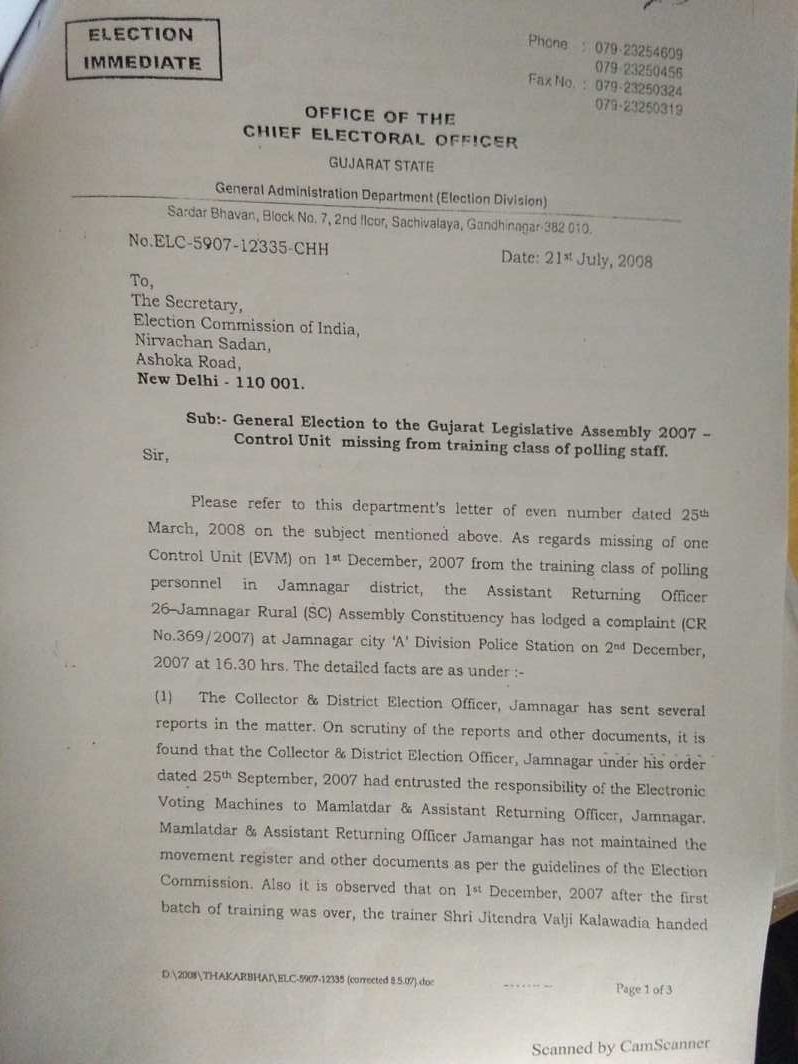 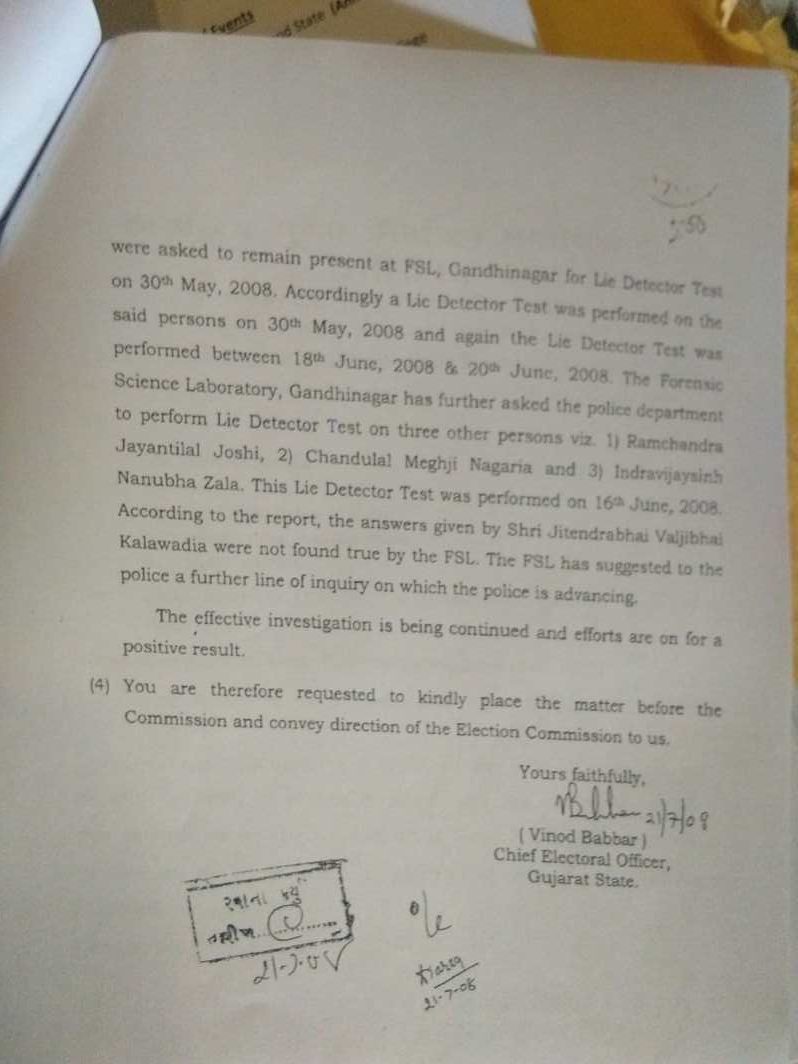