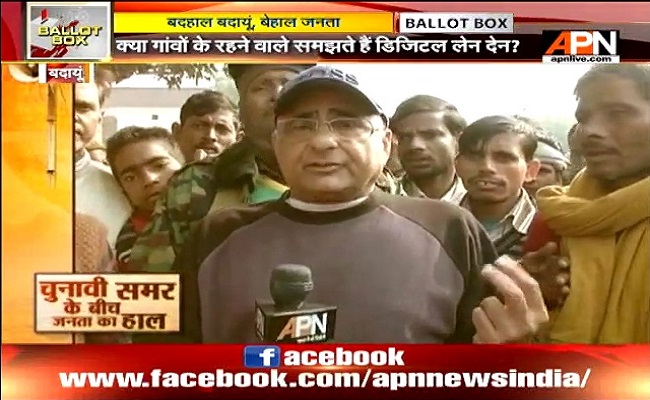 The reporter stood at the crossroads on Mujharia Chowk. To his right, the camera panned out on the road to Bulandshahr, ahead lay the road to Dehat—and the municipal township of Bilsi in Badaun—while on his left were the towns and other district areas of Badaun, Bareilly and Rampur, located at successive distances.

The reporter—Inderjit Badhwar, the Editor-in-Chief of India Legal (a sister unit of APN)—was on a mission to uncover the plight of a people in the time of an election war (Chunawi Samar ke Beech Janata ka Haal was the name of the show that was telecast on APN recently) and penetrate the lonely reaches of the heartlands of India’s largest state, Uttar Pradesh. He came away with the political pulse of the masses as well as a moving account of their gritty struggle for survival.

But first, the facts. Mujharia Chowk is at the heart of Bilsi Kshetra—a 90 percent rural region. Over three lakh people cast their votes from this place in the last election. The largest population group in this place comprises Scheduled Castes, followed by Kashyaps, Thakurs and Muslims (in order of decreasing predominance). Bilsi Kshetra has been seen to hold the key to the way all of Uttar Pradesh votes during elections.

The election fever has just begun in Mirzapur Shora village. Here, Haji Biltan of the Bahujan Samaj Party (BSP) is the sitting MLA. Mirzapur Shora is an even mix of different religious faiths and communities. The pradhan said that all groups live in harmony. Earlier, the village was part of the Seswan assembly constituency, now it is part of Bilsi.

The reporter opened his dialogue with the first interviewee, Rafat Hussain: The New Year has brought a new election, what are your expectations from the new government and your take on the infighting in the incumbent ruling party? Besides, what, in your experience, has been the effect of notebandi on the village economy?

Hussain’s answer was brief but illuminating. Only in two blocks, Ambiyapur and Seswan, are there no tubewells. The rest of the region does not suffer in terms of irrigation, said he, while we here have to burn three litres of diesel just to irrigate one bigha of land.

And diesel prices have risen, pointed out the reporter. Of course, and we are in deep trouble because of it, Hussain, now visibly perturbed, responded.

He admitted to having difficulty accessing money, thanks to the devaluing of Rs 500 and Rs 1,000 notes. But, keeping his chin up, he said that “who wakt ab kat gaya (that time has now passed)”, though, probed gently the next minute, stated that it has posed a big problem—how was a person who must spend most of the day earning their and their family’s livelihood supposed to queue before banks for long hours without losing work, and money for survival? This has, in fact, been one of the key unaddressed questions of Modi’s demonetisation drive.

The reporter then turned his mic to the women. Generally a reserved lot, they did not hold back with their grievances. These included—three-four trips to the bank weekly, no widow’s pension received in 17 years (!), no ration cards and lack of roads (“so girls here don’t get married as grooms and marriage parties are unable to reach their homes”).

Deep in the interiors of Badaun district, the documentary was slowly taking on a completely unscripted format. The reporter took this opportunity to launch into some political queries.

Reporter: What’s your opinion on the split in the Samajwadi Party?

Interviewee: It is a family issue, not a public one. “Aur Akhilesh ke pichhe public aur hum sab hai. Yuva neta hai “(And the public and ourselves are firmly behind Akhilesh. He is a youth leader)…

R: So are you with Akhilesh?

I: We are with the youth power. Akhilesh is the owner of the party, woh toh malik hai party ka aur hum uske saath hain. Aur saath rahenge haath utthake. Hindu-Musalman sabhi saath hai (He is the head of the party and we are with him. And we will stay with him with raised fists, Hindus and Muslims together.)

R: How did Haji Biltan win, then?

I: Mulayam gave the ticket to the wrong person.

I: Well, Yadavs and Muslims, all of us are united this time around. And they are not like us. They wipe their hands on their handkerchiefs after shaking hands with us. Are we so dirty? Why then should we vote for them?

R: Small incremental changes lead to bigger ones. How do you think we can bring them about here in Hindustan?

The message was loud and clear. At least in this village, the SP and the incumbent CM had strong support. The BJP had not gained much ground despite the infighting in the ruling party.

But the reporter was not done. There were other voices to be interviewed, other strands of opinion to be searched for. He continued his exploration with skill and aplomb, and what emerged was story after story of tragedy and deprivation.

The worst, perhaps, happened to this Muslim gentleman whose unlettered sister-in-law deposited Rs 2 lakh worth of savings in her State Bank of India Jan Dhan account two days after the PM’s demonetisation announcement on November 10. The bank employees took advantage of her naivete and cheated her. They told her they were too busy to “make an entry in her passbook”, or perhaps she could not get it updated and has lost her receipt, but now the family, with expenses looming in the near future for the marriages of two daughters, has no access to their entire savings.

An old woman caught hold of the reporter’s hand and narrated her story of loss. She broke down in tears even as she did so.

Another spunky lady, whose husband is paralysed due to illness, said she was forced to return to her village after she lost her job due to notebandi. She had gone to Delhi and had been successfully providing for her family and educating her children. Now the kids cannot appear for their exams as the family cannot afford to live in the capital anymore.

Indeed, as the pradhan said, the village is a big source of migrant labour and most young people from here leave for the big city to earn and send money back to run their homes. But demonetisation has meant they have had to return—“back in Delhi, some had to spend Rs 500 on a single meal after notebandi struck.”

From Ambiyapur, which also suffers from a perennial irrigation problem and is in need of tubewells, came the account of Guddu, the lame barber, a happy-go-lucky, lovable young man. He is a father of four and his wife is also disabled. The children don’t go to school and must now go hungry as their hearth has not seen a fire in 24 hours. Why? Because there is little work in notebandi times.

Their demands are but small and few. It is the job of APN to bring them to the public domain. That’s the only way to go in the quest for a better tomorrow, the reporter reminded his audience.

It was a well-shot, competently edited and thoroughly reported news documentary. The ground coverage impressed with its reach and sensitivity. And importantly, it came away with information on which way the public mood is set to swing during the coming UP assembly elections. Despite the area being a stronghold of Dharmendra Yadav, a Mulayam loyalist and cousin of the CM, the people believe that Akhilesh has come of age and have vested their faith in him. Should he get elected and form the government after the next election, it will be his solemn duty not to betray it.

Inderjit Badhwar is a reputed journalist who has reported from India and the United States. He is a Pulitzer nominee and author of the novel, The Chamber of Perfumes, which won France’s most prestigious international award as the “best foreign debut novel”.

Watch out for more of his on-ground reporting for APN in this election.