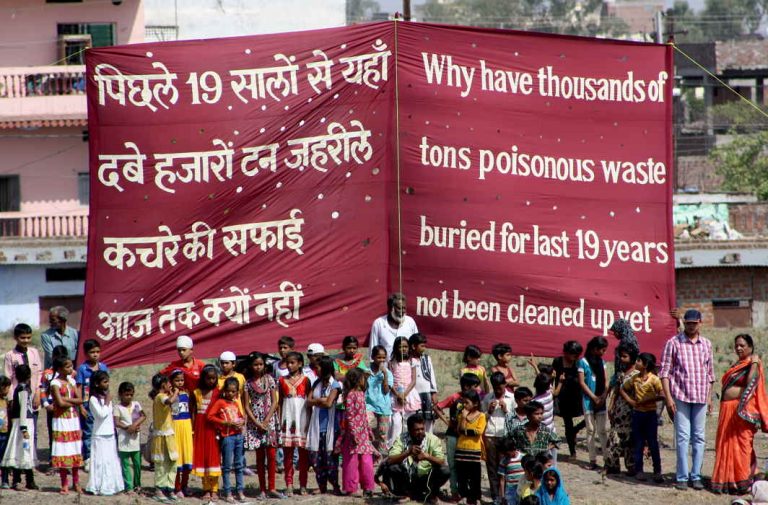 Above: Bhopal gas victims protest against the buried toxic waste that is leading to serious health problems/Photo: Rachna Dhingra

A study has found that toxic waste buried near the Union Carbide factory in Bhopal has percolated into the ground and affected the water supply of 42 nearby colonies, endangering its residents

The tragedy of the Bhopal gas victims continues to unfold. A scientific study, conducted on the directives of the Supreme Court, has reported that thousands of gas survivors and their families’ next generations are forced to use contaminated water as toxic waste in the vicinity of the defunct Union Carbide factory has not been tackled. Worse, the groundwater contamination is spreading into more areas.

The Indian Institute of Toxicology Research (IITR), Lucknow, submitted its latest report to the apex court last week regarding the quality of groundwater near the Union Carbide plant.

It confirmed excessive presence of nitrate, chloride and heavy metals. The IITR had, in 2012, reported toxicity in groundwater around the Carbide plant in 22 localities and had warned that the contamination was spreading and would continue unless the buried waste was removed from the site. With the Institute confirming contamination in water samples collected from 20 more colonies, their number has risen to 42.

The groundwater was contaminated by the poisonous methyl isocyanide gas that leaked from the factory on the night of December 2-3, 1984, killing thousands and crippling over five lakh.

Earlier, UK-based The Bhopal Medical Appeal and Bhopal-based Sambhavna Trust Clinic had examined water samples from the affected area and found that contamination was worsening as chemicals had leached through the soil into the aquifer. “A huge proportion of the factory site is full of very toxic waste,” said Colin Toogood, the report’s author. “There are parts of the factory where the soil you walk on is 100 percent toxic waste, and there are areas where you still see pools of mercury on the ground.”

Researchers collected groundwater samples from 20 locations and sent them to a lab in Switzerland, which reported high levels of chlorinated compounds in two of three samples. Studies by Sambhavna Trust Clinic, which has been providing free medical care to 32,000 survivors, claimed that the contaminated area around the factory had increased by at least two square kilometres. As long as thousands of tonnes of toxic waste remained buried in and around the factory, they said, the contamination would continue to spread and find new victims.

Allopathic physician Dr Mohammad Ali Qaisar had said that the contaminants were known to cause cancers and birth defects and damage the liver, kidneys, lungs and brain.

In February this year, the Bhopal Group of Information and Action (BGIA), which is a member of the committee appointed by the Supreme Court to monitor clean-up of the area, decided to send groundwater samples from 20 more localities to IITR to know the extent of contamination.

The report submitted to the Supreme Court also pointed to the presence of alpha napthol in the samples. The BGIA described this as a vindication of its stand that toxic substances dumped in the Union Carbide plant were the source of contamination of groundwater in areas close to the plant.

In the absence of clean-up of the plant site, it has been spreading to new areas, said the report.

Rachna Dhingra, co-convener of BGIA, told India Legal: “The report has found alpha napthol in the samples, an ingredient used by Union Carbide in the production of methyl isocyanide. This makes it amply clear that soil and groundwater in areas adjacent to the Carbide plant are getting contaminated by the spread of toxic material which the company used to dump as waste.” She alleged that the government was not interested in clean-up and stopping the contamination from spreading.

On March 8, a division bench of the Supreme Court with Justices Ranjan Gogoi and R Banumathi asked the Bhopal Municipal Corporation (BMC) to arrange piped water supply to five of the 20 localities which had contaminated water, in addition to the 22 that were already identified as containing remnants of toxic waste.

In the previous hearing on Novem­ber 22 last year, BGIA counsel Karuna Nundy told the Court that her client organisation had identified 20 more localities affected by toxic groundwater and soil. The Court had then asked the project manager of the Jawaharlal Nehru National Urban Renewal Mission to collect samples from 20 new localities identified as contaminated by BGIA and carry out sample tests in a government-recognised laboratory.

An organisation working for the gas victims had in 2004 moved a PIL in the Madhya Pradesh High Court after soil sample tests carried out in and around the closed plant revealed that 350 metric tonnes of waste was causing air and water pollution in surroundings areas with a huge human population.

The High Court later directed the centre and the state that the toxic waste be incinerated after tests at Pithampur industrial area in MP’s Dhar district. But the move failed in the face of stiff opposition by NGOs in Pithampur who claimed that waste disposal at the incinerator could harm local people and the environment.

After this, the High Court ordered that the hazardous waste be disposed of at Gujarat’s Ankleshwar incinerator. Again, NGOs from Gujarat protested and the state government petitioned the apex court to review the decision. Later, the Supreme Court directed that the waste be incinerated at the Defence Research Development Organisation (DRDO) facility near Nagpur. But this time NGOs in Maharashtra protested, following which the state government expressed its unwillingness to take on the job.

A German firm, meanwhile, proposed to dispose of the waste in Germany, but this too backtracked after protests by NGOs there. After this, the apex court asked for the waste to be incinerated at Pithampur.

A part of the soil dug out from near the Carbide plant was transported to Pithampur four years ago for this purpose. But the bulk of toxic waste is still untouched, continuing to contaminate the water.

According to organisations working for the gas leak survivors, several thousand tonnes of hazardous waste from the Union Carbide factory was buried hurriedly under a mound in 1996 by the factory management.

In June 2010, a Group of Ministers was formed to look into the problems related to the disaster and earmarked Rs 315 crore for disposal of the waste. “But for people living near the factory, the tragedy isn’t over as they still face air and water pollution given that the hazardous waste is lying in the factory,” says activist Abdul Jabbar.

This tragedy is due to lackadaisical attitudes. As far back as 2004, the Supreme Court had directed the BMC to provide tap water to 14 colonies where the groundwater was found to be contaminated. The state government took the stand that the water was safe for drinking. Nonetheless, it asked the civic body to ensure tap water supply to the affected areas.

Subsequently, pipelines were laid in some of the worst-hit localities near the Carbide plant. But the water supply work remained erratic. As the toxic waste lay untouched, the precarious situation continued.

In 2012, eight more colonies were acknowledged as contaminated by the Supreme Court. This number has further increased.

The local media has been highlighting this issue since 2004. Despite several judicial interventions, demonstrations by affected residents and pressure by NGOs on the local and Union governments, safe drinking water for the gas survivors remains a mirage.