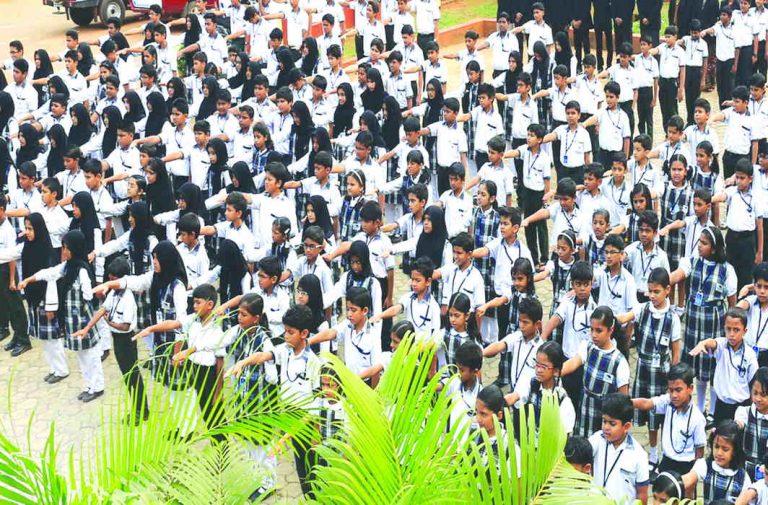 Above: Children at the morning assembly of a private school in Kerala

The new guidelines introduced by the Kerala government for schools under the Board were slammed by the Supreme Court, which upheld the Kerala High Court verdict

“Once bitten twice shy” is a phrase most would relate to. But not the Kerala government, it seems. After new guidelines issued by the state government for CBSE schools—regarding renewal and new affiliation—were rejected by the Kerala High Court, it approached the Supreme Court for relief but got a rap  on its knuckles.

On May 2, the apex court pronounced the much awaited verdict on the Special Leave Petition (SLP) filed by the state against the 2012 ruling of the Kerala High Court that termed the guidelines for granting “No Objection Certificate (NOC)” to CBSE schools way back in October 2011 as “arbitrary” and dismissed the SLP. A bench comprising Justice Madan B Lokur and Justice Deepak Gupta came down heavily on the state government while also imposing a fine of Rs 1 lakh for failing to file various follow-up affidavits sought by the Court from time to time. It was also a serious loss of face for the Left government in Kerala.

Dismissing the SLP, Justice Lokur observed, “The fundamental right to free and compulsory education to all children between the age group of 6 to 14 years postulates good quality education and not just education for the sake of education. Regulation of such education is permissible by law and not by an executive fiat. Unfortunately in this batch of petitions, the state of Kerala seeks to impose its authority over schools that provide apparently quality education, which is perceived to be a threat to public education in the state.’’

The story dates back to October 2011 when the then Congress-led UDF government passed a Government Order (GO) by which specific guidelines were set for all schools following the CBSE syllabus. New schools seeking CBSE affiliation needed to abide by the guidelines and schools already affiliated had to apply for renewal. Although there are clear-cut byelaws set by the CBSE board, the government’s aim was to control the CBSE schools, based on the argument that the subject of education was in the Concurrent List as per the Constitution of India.

Unfortunately, the guidelines set by the state government could only be termed—to put it mildly—as ridiculous.

A major bone of contention was the requirement of an extra acre of land. While the CBSE byelaws call for schools to have two acres of land, the state government pegged it at three acres without giving any justification for the hiked acreage.

Another clause that raised the hackles of the school managements was the stipulation that schools must have 300 or more students enrolled. Here again, the state failed to mention why it felt the need for such a stipulation when the CBSE makes no mention of the number of students needed in its byelaws.

The third condition was that schools must pay the same salary as those drawn by teachers in government schools. However, the private schools felt this was just not possible.

In the forefront of the battle against the state government in the High Court and the apex court for the last six years, Indira Rajan, general secretary, Kerala CBSE School Management Association, said: “There was no justification at all for some of the conditions. Just imagine a school that has been running for more than 25 years with, say, two acres of land and suddenly needs to get a renewed affiliation showing an acre more. Where will it go to get land? How is it practically possible? Isn’t that embarrassing for such schools which have been doing great service for more than two decades?’’

Following the 2011 order, the Association, led by Rajan, moved the High Court where a single bench first struck down two of the controversial clauses in the GO in April 2012. However, the state government again appealed to the division bench of the High Court. But, much to its embarrassment, the bench came down heavily on the GO itself and scrapped the entire order in September 2012. The bench also ordered the registry to make the entire circular part of the judgment.

The division bench, however, also passed an interim order, directing the state and central governments to have talks with the CBSE to decide the issue of salary, observing that “the pay should not be a ‘killer dose’”.

It was after this that the state government moved an SLP in the Supreme Court against the order of the division bench, following which the MET Public School in Perumbavoor and the Kerala CBSE School Management Association were impleaded in the case along with other schools. Suchitra Shyjinth, principal of Pragati Academy in Perumbavoor, Ernakulam district, told India Legal: “What has the quality of education got to do with the number of students you teach or the area of land you hold? You teach three thousand or three hundred students, the end outcome is what matters. In fact, lesser the number, the better is the quality as it only helps the schools to concentrate more on the overall development of the children”.

The Supreme Court, too, agreed with what the principal said. In the judgment, the Court says, “We do not see how, if the number of students is less than 300 it will detract from the quality of education imparted to the students. In other words, the requirement of minimum strength of 300 students is a completely arbitrary figure arrived at by Kerala which has no rational nexus with quality education or the CBSE affiliation byelaws.”

Many feel the attempt by the state government to control the CBSE schools came post the 2009 Right to Education Act (RTE) which gives the legislature a lot of space in deciding and dealing with how the primary education sector is run in the country. “It was under the pretext of implementing RTE Act, 2009, and related rules that the state government proposed this system of combining NOC with recognition under the subject act so that they could make these norms applicable to the then existing CBSE affiliated schools also,’’ says Rajan.

The schools feel that this was a planned strategy to exert more control on the CBSE schools which otherwise function independently since they are governed by the central act of the CBSE, under the Union ministry of human resource development, even though education is a subject in the Concur-rent List.

Legal experts, however, say that education being in the Concurrent List doesn’t automatically give the state government any special rights or privileges.

“Once there is a central Act like the RTE, 2009, the scope of legislation on the part of the state government is highly limited. Merely because it comes under the Concurrent List does not give blanket freedom to the state legislature to intervene. The power of the state government to pass any such order will be subjected to central enactment only which in this case is the RTE 2009,” advocate Kaleeswaram Raj told India Legal.

A section of the educationists in the state feel that the mushrooming of CBSE schools in Kerala could perhaps be the reason that forced the state to go for such stringent guidelines. There are at least a few who feel that although there are CBSE byelaws in place, many private schools in the state do not completely follow them.

“The CBSE is itself a corrupt system from top to bottom. There may be byelaws on paper but most of the time it is not followed. Many schools in the state get away with it and this, I feel, seriously affects the quality of the education and the sector at large,” said noted education activist Shajar Khan to India Legal.

The affidavit filed by the state before the single bench of the High Court in 2012 had claimed that restrictions had been placed on the CBSE schools to “prevent their mushrooming growth which could affect the public education system in the state”.

The apex court, however, has questioned this stand in very strong terms. “The very fact that there is a mushrooming growth of CBSE schools is an indication that public education system in Kerala as managed by the state government leaves something more to be desired in terms of the quality of education. How does the restriction imposed by Kerala benefit the children of the state?’’ the concerned bench asked.

These are questions to which the state government clearly had no answer, leading to the highest court in the land dismissing the state’s SLP.