The Union budget’s new housing initiative does not have the legal provisions to stop builders from exploiting the policy and claiming tax benefits. The government has erred by linking small-sized flats to economy housing

When Union finance minister Arun Jaitley presented Budget 2017 on February 1, it was variously hailed for its pro-poor focus. Typically, urban development minister Venkaiah Naidu described the budget as a “progressive” policy document. “The finance minister has placed before the country a lokpriya (popular) budget. But, it is not populist, rather people-oriented and reflects the centre’s inclusive development plan by giving a significant push to affordable housing,” he gushed.

But as the dust settled, the realisation dawned on those who keep a close watch on the housing sector that the new “affordable housing policy” had fundamental flaws and lacked the legal teeth to counter misuse by developers who could claim a 100 percent tax waiver on profits for five years in the name of providing affordable housing.

As Chandrasekhar Prabhu, a well-known Mumbai-based housing and urban development expert told India Legal: “The new policy does not address the fundamental question of prices, but links size to affordability. A small flat is not necessarily an affordable flat. It all depends on where it is located. The government by not fixing prices and relying on the dubious formula that small is affordable has made a mistake. As I see it, this is an initiative which will see builders laughing all the way to the bank.”

The scheme spelt out in the budget is very clear. Affordable housing has been redefined as flats with a “carpet area” of 30 square metres in the corporation limits of the four major metros—Mumbai, Delhi, Kolkata and Chennai—and 60 square metres outside it and in the other cities and towns. Earlier it was defined as housing with a “built up” area of 30-60 square metres. This redefinition is significant since it has increased the floor area of affordable housing by almost 40 percent.

Carpet area is the actual size of the liveable area of the flat excluding the outer walls and balconies. Built-up area includes the outer constructions. By redefining “affordable” in terms of carpet area, the budget has increased the size of affordable flats. So, builders can stretch the carpet area by incorporating the built-up area which includes balconies and floor space concessions into the size of the flats. Thus a 30 square metre flat can be transformed into a 450-500 square feet one bedroom flat and a 60 square metre apartment becomes a 900-1000 square feet two-bedroom flat. 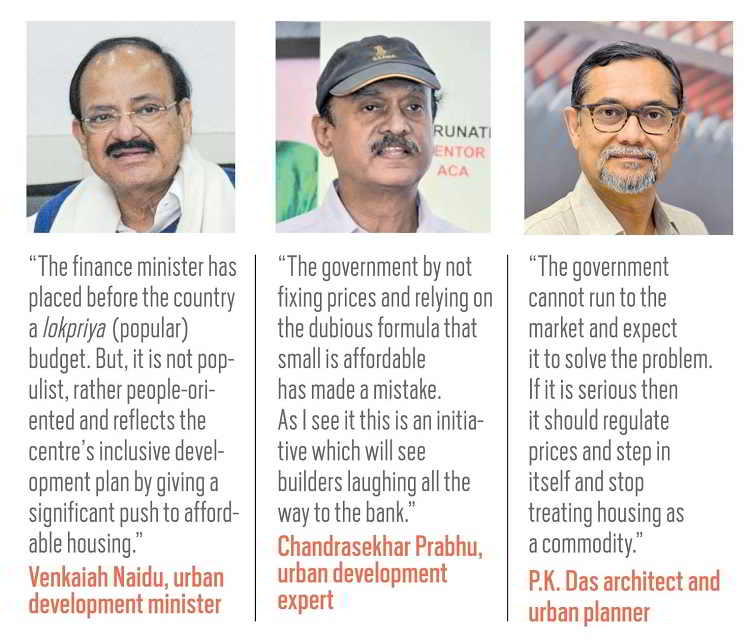 In Mumbai, which is an extreme case vis-à-vis prices, a one bedroom flat may cost anywhere between Rs 1 crore to Rs 3 crore depending on the area. And in a city like Bangalore, which does not fall within the definition of a major metro, the price of a two-bedroom apartment (900-1,000 square feet) may range upwards of Rs 60 lakh to Rs 1.5 crore.

If we take the benchmark set by urban development experts, affordable housing should fall within the salary earned by the breadwinner of a family in five years. By the urban development ministry’s own calculation, the major demand (95 percent) for inexpensive housing comes from those who earn less than Rs 2 lakh a year.

Lawyers who advise builders told India Legal that there is nothing that prevents a builder from constructing affordable housing units at a location of his choice. “It can be Napean Sea Road or Parel in Mumbai or Vasant Vihar in Delhi. There is nothing illegal about it provided the size is right,” says a lawyer. According to him, builders and their lawyers will also help buyers find ways to buy multiple flats under different names and amalgamate them to own a huge flat in an upscale locality.

The incentives to builders and developers who build such affordable housing in areas of their choice are significant. Here are some of them:

Given all these sops it’s no wonder then that the reality industry is expecting a huge turnaround in its profits. But the big question is whether it will address the concerns of those who need affordable housing. According to sources in the urban development ministry it is most likely that the so-called budget homes could well be brought up by those in the upper income bracket. “There should have been a cap on the price to make any sense,” says an official.

Adds Prabhu: “It’s like saying you can make spoons provided the size is right. They can be made of gold, platinum or of aluminium. It doesn’t matter. I think without a cap on the prices, giving tax waivers to builders is uncalled for. If they build flats priced at Rs 10- 12 lakh give them concessions by all means but why give them sops when they will be selling at Rs 1-2 crore? Can you call that affordable?”

According to the urban development ministry, the present requirement for affordable housing is 180 lakh homes. This figure could go up to 300 lakh by 2030 if the mountain of demand that is piling up is not met. But as one former official in the urban development ministry told India Legal: “The scale of the problem is such that the government cannot solve it by providing incentives to builders when they will be building houses that cannot be afforded by those who require it.”

This is a point that Mumbai-based architect and urban development expert PK Das reiterates at length. He told India legal: “The affordable housing provided in the budget does not address one fundamental issue—land. There is no mention of land anywhere. It has been left to the builders to identify it, buy it and develop it. They will obviously buy in areas where they can maximise profits. The government cannot run to the market and expect it to solve the problem of housing for the poor. It is only government bodies, PSUs and state enterprises which can build affordable housing and not the developers. If the government is serious then it should regulate prices and step in itself and stop treating housing as a commodity.”

But getting government organisations and state housing bodies to address the problem is a challenge. It would entail setting deadlines and ensuring that bottlenecks and bureaucratic red tape does not slow down the process.

It was with much fanfare that the Prime Minister launched his “housing for all by 2022” programme—the Pradhan Mantri Awas Yojna in 2015. The target was to construct 30 lakh affordable homes a year. But it has woefully fallen short of its target.  In fact, a review done last year by the urban development ministry revealed that no more than 19,255 units were constructed despite 864 projects having been cleared. Had all of them been completed then over 7 lakh affordable homes costing anywhere between Rs 12 lakh and Rs 15 lakh would have been ready for occupation.

But can the builders and developers solve the problem when the government has failed? Many experts see a boom in the realty sector in the post-budget scenario. Whether that will translate into affordable housing for all is a big question. Simply put, with profits in mind the developers may lack the social commitment required for providing homes for the economically weaker section of society. 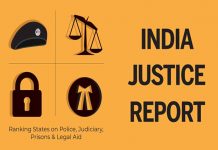 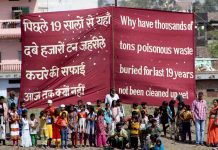 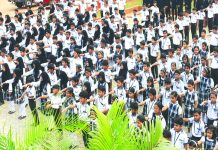