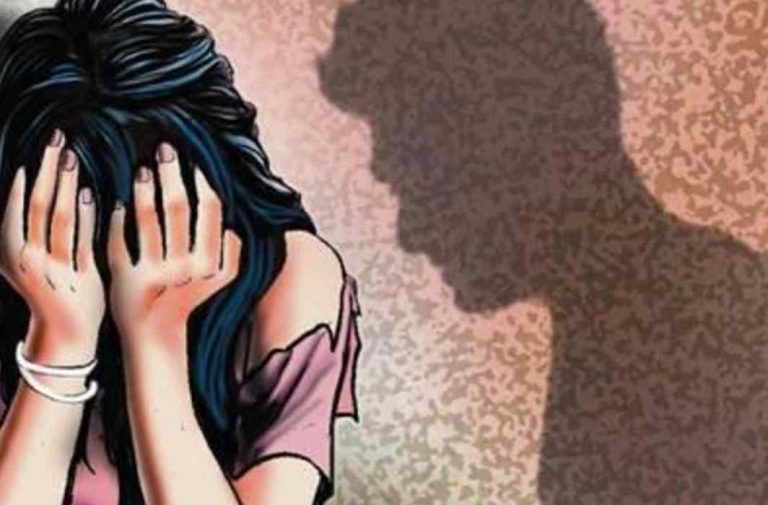 Above: One of the stock images Indian news outlets have traditionally used to depict sexual assault. Photo: Courtesy  Breakthrough India

On a balmy Sunday in April, a few dozen designers sat at a pub in South Delhi scrutinizing a projection screen. It showed an illustration of a woman in a torn violet shirt. A pair of bangles hung off her wrist. She cowered close to the floor, her head sunk between her hands. On the wall behind her, a man’s shadow loomed menacingly.

“She’s being shown as a weakling,” someone in the front row said. “We need to show her as a survivor.”

A few designers objected to the artfully ripped clothing, which had a cinematic quality, conjuring the image of a heroine roughed up, yet still glamorous. But there is no universal idiom for assault. “You could be in perfectly okay clothes and still be violated,” a young woman pointed out.

In India, press laws prevent media outlets from identifying victims of sexual violence, or using any photographs that might lead them to be identified. So news agencies rely on a set of stock images—including the one shown on the projection screen—to illustrate reports of assault, drawing from a tiny common-domain database. But these newsroom images, featuring a half-dozen variations on near-identical themes, reinforce harmful stereotypes surrounding sexual violence, skewing perceptions of accountability.

Women are depicted as helpless (though still potentially culpable) victims, huddled on the ground with their faces buried. Perpetrators lurk in spotlit doorways, dangerous, powerful, and unseen. The images reflect prevalent attitudes in India around assault that are mirrored in Indian popular culture, including film. A taboo around rape means that survivors are often stigmatized. In representations of violence, women are reduced to inert objects, attractive prey to be pursued and captured.

“Images are a very strong part of an article. They reinforce our own conditioning constantly,” says Priyanka Kher, head of communications at Breakthrough India, a human rights organization that uses media and pop culture as outreach tools.

It’s about planting a seed of doubt, questioning the narrative.”

This past spring, Breakthrough India saw an opportunity to reset the narrative by developing updated news illustrations and sharing them with media outlets. The group devised a social media campaign—#RedrawMisogyny—and enlisted designers and volunteers to develop an alternative bank of images. With its own database of stock imagery, the first part of which was released earlier this summer, Breakthrough is determined to counter regressive media tropes and portray sexual and gender-based violence in a more informed light.

“If every time you do a search for rape and find images that are politically correct, that goes a long way,” Kher says. “It’s about planting a seed of doubt, questioning the narrative.”

There were more than 34,000 reports of sexual assault in India in 2015, according to the most recent figures released by the National Crime Records Bureau. But since rape remains starkly underreported, actual numbers are hard to gauge (in the US, where rape is also underreported, a sexual assault occurs more or less every minute.) In Delhi—dubbed India’s “rape capital”—the rate of reported sexual assaults has risen since 2012, when a 23-year-old medical student was fatally gang raped aboard a moving bus, drawing mass coverage around the world. The so-called “Nirbhaya case”—named for the Hindi word for “fearless,” which the press used as a pseudonym for the victim—made violence against women front page news.

Two months before the Nirbhaya case, an article in The New York Times on Indian news reports of rape observed that “the emphasis still appears to be on the disgraced victim.” It pointed toward the enduring trope of the “shamed woman,” seen in illustrations of a woman with her head bowed, and continued: “Sometimes, this woman also happens to be somewhat scantily clad.”

A study carried out by the University of Oklahoma on the impact of news images, which used the 2003 Iraq war as a case study, found that media visuals are instrumental in directing public opinion. Unlike the actual text of the stories, which relied on “arguments and details” and were “cognitive in nature,” the images shown invoked only “powerful, instantaneous emotion.”

Newsroom images rely on a vocabulary of visual shorthands: ripped clothing, wide-mouthed screams, shadowy predators. They reinforce a larger double standard around shame and sexual purity, which has deep roots in India’s visual culture. The image of Bharat Mata, or Mother India, allegorizes the nation as a patriotic Hindu goddess. Originally conceived under British rule as a powerful anti-colonial emblem, the symbol linked colonial possession to sexual dishonor, imagining the independent nation as a woman’s unviolated body. In The Ramayana, the ancient Sanskrit epic poem that is reenacted annually all across the subcontinent, the kidnapped queen, Sita, is rescued from a long imprisonment under a lustful demon. Dishonored, she is forced to abandon her kingdom and is exiled to the forest.

Media reporting on sexual assault remains steeped in a cinematic language, recycling outdated mores. Newsroom tropes, with their shameful, terror-stricken women and prowling, lustful men, script visual narratives that are wholly divorced from the realities of rape. The journalist Joanna Jolly, a former BBC South Asia correspondent, has said that the illustrations misrepresent assault as “stranger danger,” an “almost Victorian idea of rape” that is taken out of context and only committed by “madmen, who attack women at night.” Survivors of sexual assault are, in fact, likely to have known their assailants.

“It’s like any political propaganda. It shapes our thinking,” says Ruhie Kumar, a communications consultant who grew up flipping through her mother’s Hindi-language women’s magazines, which used similar kinds of images when illustrating violence against women. “If we don’t have an intervention, we’re going to have a really off-balance narrative being pushed far and wide.”

A 2015 report from Australia’s National Research Organization for Women’s Safety found that news reports on violence against women rely on what’s called “episodic framing.” Unlike “thematic framing,” which uses social factors such as gender inequality to contextualize incidents, episodic or event-based framing “tends to elicit individualistic rather than societal attributions of responsibility.” In India, this tendency often leads to victim-blaming.

This past winter, in a forlorn patch of a Delhi park behind a strip of restaurants, a woman was allegedly assaulted by a waiter. In its reporting, The Times of India, India’s widest read English-language daily paper, made mention of the woman’s night of “revelry” and “pub-hopping.” To illustrate the article, it ran an image of a female prisoner slinking forward in a jail cell. Bars cast long shadows over her face.

“For me to counter it, because I’m so brainwashed, I have to really take a step back,” Kumar says.

That was precisely the point of the gathering of designers in April: to debate how to develop a better narrative framework for reporting and illustrating assault. But before drafting new images, the group first continued to dissect the news illustrations currently in circulation, which can appear up to several times a week in Indian newspapers.

The next picture projected on the screen that morning captured, unnervingly, the vantage point of the assailant. From eye level, a grasping hand reached forward. A woman shrunk back, her palm shielding her face. All the viewer could see was a pair of widened eyes and a crown of dark curls.

“How can we avoid sensationalizing?” the emcee asked. The audience grew quiet, save for a little girl dressed in bubblegum pink, who babbled baby-talk in the back row. “Can we give out a powerful image using more subtle imagery?”

A woman in white raised her hand. She had seen the illustration in multiple news reports. “The perpetrator is just a symbol of what it means to be a perpetrator,” she complained. It was a cartoon—a lurid abbreviation of real horror. “We need to create a narrative that gives out the message, enough is enough.”

“Maybe if we show the survivor dragging the perpetrator to the police station,” suggested a designer. “Head up, not chin down.”

Another hand shot up. “From my experience, trying to do anything with gender in a newsroom is very difficult,” the hand-raiser ventured. “The only solution is to shove it down their throats!” the others shouted, sparking a round of applause.

Illustrations used by Indian media outlets are typically developed by visualizers working alongside staff reporters and editors covering stories of domestic and sexual violence. They can also be sourced from various stock photo databases and online platforms. Though repetitive—and ridden with troubling cliches—dramatized sketches of events also help protect the anonymity of victims.

Later in the afternoon, Himel Sarkar, digital coordinator for Breakthrough India, held up his Samsung smartphone: A national paper had just reported a gang rape in Mumbai. Under the headline was an illustration—a long-haired girl, groveling in obvious fear—that had appeared earlier in the slideshow. “Case in point,” Sarkar said.

After a chicken biriyani lunch, designers split up into small groups, tasked with preparing preliminary sketches. A woman in a gray sari—Neha Dixit— complained of the “darkness” and “end-of-the-world hopelessness” to which the media defaulted when representing rape. There was an appetite for tearstained cheeks and ruined lives, but none for solidarity and longer-term support.

“I was thinking to flip it,” Dixit said quietly, “to show the victim as a survivor.”

“And remove the perpetrator?” asked Rana Bhanu, a bearded illustrator, leaning across the table. “Is that something we’re willing to do?”

Taking out a small notepad, Valiullah Hashmi, a Delhi-based artist in his mid-twenties, sketched out Lady Justice balancing a set of scales—the survivor on one side, the assailant on the other. Others protested against symbolism, seeing it as a form of erasure.

“The more abstract we make it… the silencing [around rape] will get stronger,” argued photojournalist Ruhani Kaur.

“Whenever we write about rape, it’s written in a passive voice: ‘A woman was raped,’” explained journalist Shobha SV. “The [rapist] never really comes into focus.”

A little while later, the groups presented their ideas. One sketch showed an outstretched hand—now a woman’s—clawing at the face of an astonished assailant, drawing little globs of blood. In another, a boy stood smiling. His shadow revealed devil’s horns. “It shows that someone you know can also be the one to create havoc in your life,” explained the artist. “He’s the one who should be shamed.”

Men still leered, not shadowy monsters, but real guys in jeans, and this time the viewer faced them. A young woman stood alone at night, men staring at her from behind. But she looked normal, unafraid; it was the oglers whose behavior looked wrong.

The next image showed a woman staring straight ahead, cheeks and forehead scarred, her expression determined. “The woman, she’s suffered a lot,” said a man in a pink shirt and red turban. “But she’s still standing tall.” Her attacker, glimpsed in the foreground, shrank in shame, hands covering his face. Around his raised wrists, a pair of handcuffs gleamed.