The Uttarakhand High Court granting living entity status to the Ganga and the Yamuna has been hailed by conservationists. But parenting the rivers is proving to be a logistical nightmare, forcing the centre to approach the apex court for directions

A recent landmark order of the High Court of Uttarakhand granting “living entity” status to the Ganga and Yamuna rivers has left the centre flummoxed by the administrative and logistical nightmare that its implementation entails. The Court appointed the director of Namami Gange (an integrated conservation mission) and the advocate general as legal parents of the rivers, holding them responsible for its upkeep and health. Both the Ganga and the Yamuna are dying due to pollution and neglect but the Court did not elaborate on how the “parents” should go about their job of protecting the rivers which run through 11 states. The Ganga is 2,525 kms long and the Yamuna stretches for 1,376 kms.

The centre has now approached the Supreme Court citing the administrative issues involved in looking after the “living” rivers and implementing the judgement. Uttarakhand Urban Development Minister Madan Kaushik who is also a government spokesman in the BJP-ruled state wished to know how the state chief secretary and the attorney general could tackle issues related to the rivers. Clearly, it is no easy task.

The Uttarakhand High Court judgement pronounced by a division bench of Justices Rajeev Sharma and Alok Singh came after a PIL was filed by Haridwar resident Mohammed Salim on the high levels of pollution, encroachment, mining and stone crushing on the banks of the Ganga. The landmark judgement said that the Ganga and the Yamuna, their tributaries, streams, glaciers, lakes and wetlands were to be now seen as living persons having rights. The order covers large basins of both these rivers. The Court noted that an extraordinary situation called for an extraordinary solution.

The judgement was hailed by nature lovers. They saw it as an attempt by the Court to fix responsibility on those who are in charge of ensuring that the river is not polluted. Ravi Agarwal, director, Toxics Link, told India Legal: “It is a brave order. It paves way for a new jurisprudence. It has sent a strong message that nature cannot be ignored by giving it a personhood. It has created a new legal philosophy. It is going to be difficult to implement. But we can now start asking numerous questions on what should be done to find some solutions to implement the court order and protect these rivers. It depends entirely on how seriously we want to protect these rivers and if we have a political will to do it.”

The concept of protecting already existed prior to the judgement and was often discussed. It is just that no one cared enough to translate it into action. The National Green Tribunal had on numerous occasions pulled up government officials in various states for not taking punitive action against polluters of rivers. “Officials in charge did not even know how many industries were emptying effluents into the Ganga,” points out noted activist and lawyer MC Mehta who has fought on various environmental issues for decades. “It is not that we did not have laws to protect the rivers but they were never enforced,” he adds. 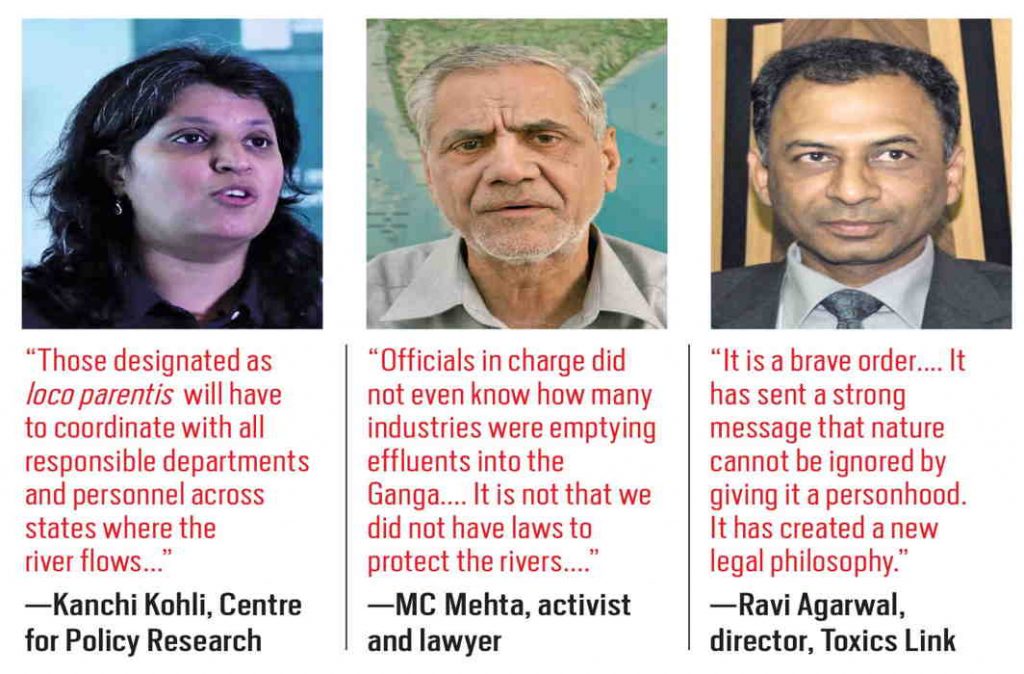 Clearly, despite crores of rupees that were sunk into cleaning the rivers, there was no real political will to implement the existing laws. The Ganga and the Yamuna had merely become political metaphors—springing up in election speeches only to be quietly forgotten.

Kanchi Kohli, Legal Research Director, CPR-Namati Environment Justice Program, Centre for Policy Research, told India Legal: “While the issue of nature as a living entity needs detailed ethical conceptual and legal examination, the judgment itself has administrative complications. The problems of inter-basin and inter-state coordination are practical dimensions to address while implementing such a judgement, even though parenthood has been entrusted. For a direction to be carried out, it is important to locate not only the responsible institution, but also the officials in whom this responsibility is entrusted if problems have to be resolved. The director, Namani Gange and officials from Uttarakhand designated as loco parentis will have to coordinate with all responsible departments and personnel across states where the river flows, to comply with this order. Many of these officials have always had the authority to act, but have not done so. If they had, the problem would not have reached this proportion in the first place.”

Ironically, both the Ganga and the Yamuna are worshipped in India and are a veritable part of several religious rituals. But the two rivers are also flooded with garbage and sewage, making them dangerously toxic. The veneration of the rivers is a throwback to ancient times and one of the many anachronisms that one finds in India. But the polluted waters are a reflection of the times we live in when we take nature for granted.