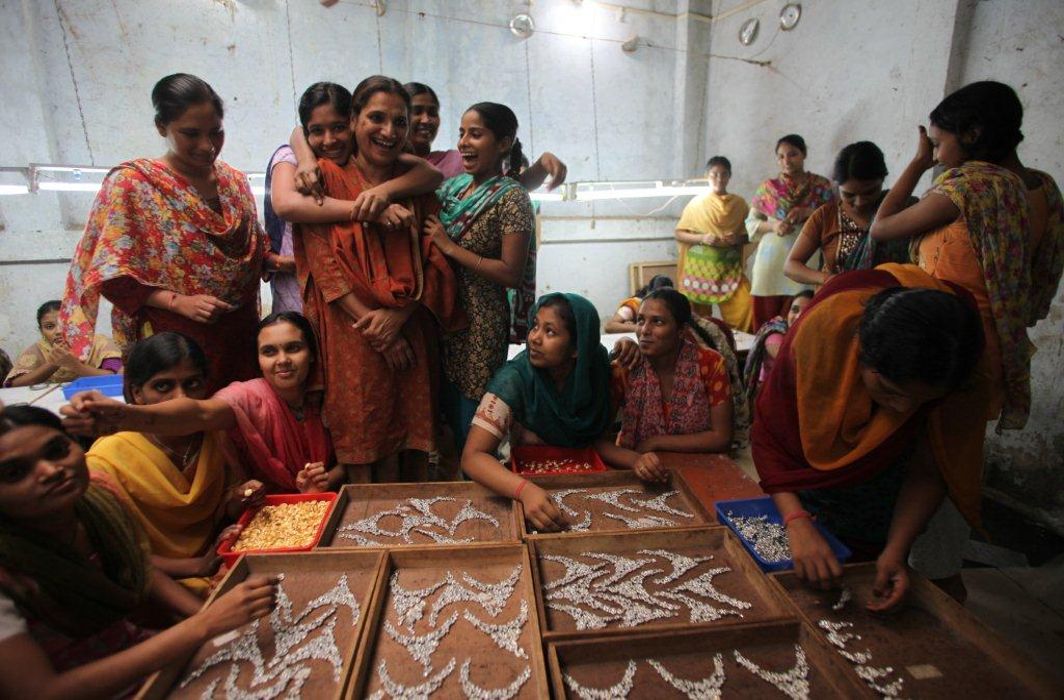 Above: Women rescued from immoral trafficking working at a craft centre in Maharashtra/Photo: www.rescuefoundation.net

Trafficking of Persons (Prevention, Protection and Rehabilitation) Bill, 2018, which awaits a nod from Parliament, will for the first time address the issue of victim rehabilitation and doesn’t criminalise them

It is unusual for would-be beneficiaries of a piece of legislation to come together and urge its early passage by MPs. When 30 survivors of human trafficking from Rajasthan, Uttar Pradesh, Punjab, Chhattisgarh and Madhya Pradesh came together in Delhi recently for such a purpose, the media took due note of it. That they protested despite the legislation being approved by the Union cabinet only recently shows their concern about likely delays caused by procedural requirements in Parliament. It is axiomatic that the Trafficking of Persons (Prevention, Protection and Rehabilitation) Bill, 2018, will find all-party support in Parliament to ensure its early passage.

The new Bill, according to reports, will be the first to address the issue of victim rehabilitation. Unlike the Immoral Traffic (Prevention) Act (ITPA), 1956, Bonded Labour System (Abolition) Act, 1976, and Section 370 of the Indian Penal Code, the new Bill takes a holistic view and aims to prevent trafficking for forced labour, beggary and organ transplant, among many others.

Section 370 of the IPC seeks to punish whoever imports, exports, removes, buys, sells or disposes of any person as a slave, or accepts, receives or detains against his will any person as a slave. It shall be punished with imprisonment of either description for a term which may extend to seven years, and shall also be liable to a fine.

The organisation which brought the survivors of human trafficking together in Delhi, Rashtriya Garima Abhiyan, has hailed the new Bill, as it is gender-neutral and covers transgender persons. “It doesn’t criminalise the victims, but instead provides them with shelter, compensation, and counselling,” its spokesperson said.

As per National Crime Records Bureau data, there were more than 20,000 human trafficking survivors in 2016, half of whom were trafficked for forced labour and a third for commercial sex.

The concern of the stakeholders to ensure early passage of the Bill stems from the fact that the draft Bill, awaiting consideration by Parliament, was prepared in 2016, but failed to make headway, perhaps due to societal and political apathy. Prepared by the Union Ministry of Women and Child Development, the Bill aims to create a legal, economic and social environment against trafficking of persons.

Clause (1) of Article 23 of the Constitution prohibits trafficking in human beings and begar and other similar forms of forced labour, making a contravention of the same a punishable offence. The draft Bill also relies on Article 21 of the Constitution, guaranteeing that no person shall be deprived of his life or personal liberty except according to the procedure established by law.

The Bill takes note of the fact that India has ratified the United Nations Convention on Transnational Organised Crime and its three Optional Protocols, including the Protocol to Prevent, Suppress and Punish Trafficking in persons, especially women and children.

The Bill enables the appropriate government in the state or Union Territory to constitute for every district, a district anti-trafficking committee (DATC) for exercising the powers and performing such functions and duties in relation to prevention, rescue, protection, medical care, psychological assistance, skill development and need-based rehabilitation of victims as may be prescribed.

The Bill envisages a meeting of the ATC at least once in three months. A victim, after rescue, is to be produced before the member secretary of the DATC by the investigating officer, police officer, public servant, social worker, public-spirited citizen even if she is a child.

The Bill envisages setting up of a state ATC (SATC) to oversee the implementation of the Act, and advise the state and UT governments and the DATC on matters relating to prevention of trafficking, protection and rehabilitation of victims of trafficking in persons and to perform such other functions and duties as may be prescribed.

The SATC is to be a high-powered body with the chief secretary as its chairperson, and the secretaries to the Departments of Women and Child Development, Home, Labour, and Health as its members. Its other members would include the DGP, secretary of the State Legal Services Authority, and two social workers, one of whom shall be a woman and nominated by the chief justice of the High Court.

The centre has a responsibility to constitute a Central Anti-Trafficking Advisory Board (CATAB), headed by the secretary, Ministry of Women and Child Development, with representatives from the concerned ministries, states and UTs, and members from civil society organisations.

The CATAB will oversee the implementation of the Act, and advise the states and UT governments on issues of concern. The Bill envisages the centre constituting a special agency for investigation of offences under its provisions.

The Bill has a separate chapter on support services, dealing with protection homes to provide for shelter, food, clothing, counselling and medical care for the rescued victims and such other services in the manner prescribed. Setting up of one or more special homes in each district for the purpose of providing long-term institutional support for the rehabilitation of victims is another feature of the Bill.

The Bill envisages the appropriate government framing schemes and programmes for providing rehabilitation, support and after-care services necessary for social integration of the victims and to prevent re-trafficking. The Bill seeks to punish persons in charge of unregistered protection or special homes providing shelter to the victims with imprisonment extending to one year or with a fine of not less than Rs 1 lakh or with both.

Persons contravening the provision for the period and conditions of registration may be imprisoned for a term extending to three years, with a fine which may extend to Rs 50,000 or with both. The Bill seeks to punish media-persons for disclosure of identity of victims, use of narcotic drugs, psychotropic or alcoholic substances for trafficking, and use of chemical substance or hormones for the purpose of exploitation. Offences under the Act are to be treated as cognisable and non-bailable.

The Bill also provides for confiscation, forfeiture and attachment of property of persons accused of having committed an offence under Sections 16 and 17 of the Act or offences under Sections 370-373 of the Indian Penal Code.

The burden of proving that the property so attached and confiscated is not acquired or used in the commission of the offence under the Act is on the accused, the Bill says.

Presumption of commission and abetment of offences, on prosecution, setting up of special courts and an Anti-Trafficking Fund, requirement of mandatory reporting of offences, repatriation of victims to their home states or home countries to ensure protection, appointment of special public prosecutors and separate investigating officers, besides protection of action taken by them in good faith are some other salient features of this Bill.