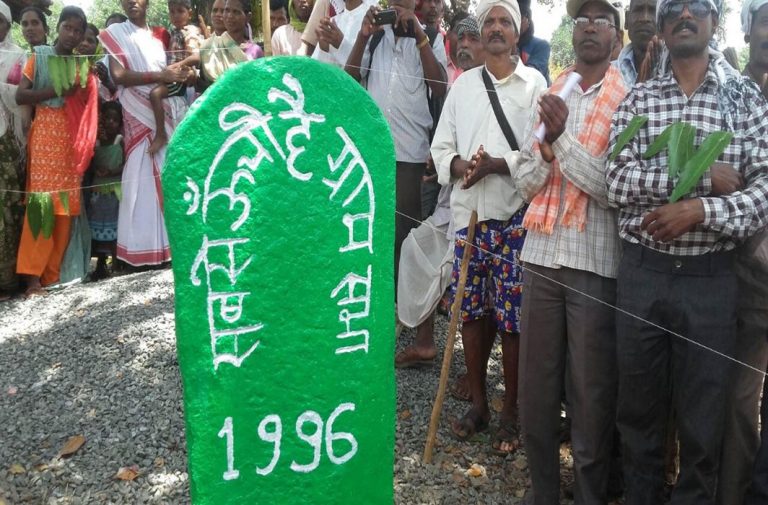 Above: Tribals from Jashpur district in Chhattisgarh holding a meeting on the Pathalgadi movement

“…every village shall have a Gram Sabha consisting of persons whose names are included in the electoral rolls for the Panchayat at the village level; (d) every Gram Sabha shall be competent to safeguard and preserve the traditions and customs of the people, their cultural identity, community resources and the customary mode of dispute resolution; (e) every Gram Sabha shall – i. approve of the plans, programmes and projects for social and economic development before such plans, programmes and projects are taken up for implementation by the Panchayat at the village level; ii. be responsible for the identification or selection of persons as beneficiaries under the poverty alleviation and other programmes.”— This is from the provisions of the Panchayats (Extension to the Scheduled Areas) Act (PESA), 1996.

The 20-year-old Act which recognised the gram sabha’s essential supremacy over all water, jungle and land in Scheduled Areas and extended the provisions of Part IX of the Constitution to these areas has now led to a new unrest in contiguous tribal areas of Jharkhand and Chhattisgarh in what is known as Pathalgadi.

Usually, a stone about 15 feet by four feet is erected outside a village announcing the above-mentioned PESA clause and prohibiting any non-tribal, especially government and police officials, from entering it. The new unrest kicked off in Kochang in Khunti district in Jharkhand on February 25 and reached Bachraon in Jashpur (Chhattisgarh) last fortnight. In Chhattisgarh, it has acquired the shape of a public movement and is slowly but surely engulfing Jashpur, Raigarh and Ambikapur districts of the state.

On April 16, the Union home ministry declared Jashpur a Naxalite-free district after there were no incidents of such violence in the district for more than a year. On April 22, the villagers of Bachraon planted the first stone in a major ceremony and 15 other villages followed suit.

“Pathalgadi is basically a way to demarcate our territories and tell outsiders (government officials) that the law of the land does not apply here. It is a movement of the tribal people,” said Jharkhand-based Balram Samad, a young leader of the movement.

Large swathes of contiguous land in west Jharkhand and north Chhattisgarh are home to Munda tribals. According to their custom, a huge stone, bigger than a tombstone, is placed on the death of a community ancestor.

This tradition has now been adapted by placing a large stone outside the village on a road leading to it. The movement derives inspiration from the provisions of PESA so some of its key provisions are imprinted on the stones in order to enlighten adivasis about this law.

In Chhattisgarh, the movement is strongest in Jashpur district while in Jharkhand, it is in Arki block in Khunti district, which is also the birthplace of tribal freedom fighter and folk hero Birsa Munda. The police and paramilitary forces are reluctant to enter the villages and local journalists also keep away. Every outsider is quickly intercepted and interrogated in these areas.

There is also a very subtle subtext to this Pathalgadi movement in Chhattisgarh. The BJP, under the scion of the former Jashpur royal family, Dilip Singh Judeo, had been able to divide the tribal community into Christian and non-Christian tribals with his ostentatious Ghar Wapsi programmes. The same feeling has come to the fore again. Ranvijay Singh Judeo, currently a member of the Rajya Sabha, and Union minister Vishnnudeo Sai took out a counter rally on April 27 and in several villages, including Batunga, sadbhavna yatris broke down the Pathalgadi stones.

The Pathalgadi movement is led by Vijay Kujur in Jharkhand and former IAS officer of the Chhattisgarh cadre HP Kindo and a former ONGC officer, Joseph Tigga, in Chhattisgarh. Both Kindo and Tigga were arrested along with 45 others in a midnight swoop by the CG Police on April 30.

But there have been schisms within this movement too. A new organisation called Sarva Sanatan Adivasi Samaj, ostensibly comprising all non-Christian tribals, also held a press briefing in Ambikapur on May 1, disassociating itself and the Adivasi Samaj from the Pathalgadi movement.

The police, of course, has its own spin, claiming that the Pathalgadi movement is being backed by Maoists and the People’s Liberation Front of India. It arrested Tigga and Kindo under non-bailable sections of the IPC for creating public disorder in the name of religion. It may not be so simple, though.

A younger leader of the movement told India Legal on condition of anonymity: “It is 70 years since we got independence, but our living conditions have not changed. If today the government wants to enter our area, they should come through the gram sabha. We are the original inhabitants of this country, others are dikus (foreigners).” Many of these young leaders, who address gatherings in various villages, are raising legitimate concerns of tribals against occupation of their mineral-rich land by power and mining companies.

Ever since it came to power in Jharkhand in December 2014, the BJP government led by Chief Minister Raghubar Das has been trying to amend two 150-year-old laws—the Chotanagpur Tenancy (CNT) Act and the Santhal Pargana Tenancy (SPT) Act—which protect tribal tenancy rights. The immediate trigger for the Pathalgadi movement seems to be amendments to the two Acts passed by the BJP government in November 2016, which enable the acquisition of tribal land for “development” purposes.

The Chhattisgarh government made a similar amendment to its Land Revenue Code which made buying tribal land with their “consent” easier.

Under intense pressure from Opposition parties and their own tribal leaders, both governments had to withdraw the bills but the damage had been done.

The Jharkhand government seems to not have learnt its lesson and has come up with the Right to Fair Compensation and Transparency in Land Acquisition, Rehabilitation and Resettlement Act 2013 (Jharkhand Amendment) Bill again and got it passed in the last monsoon session of the Assembly. The Bill is awaiting the assent of the governor and the president.

Opposition leaders have claimed that this Bill is even more dangerous than the earlier CNT and SPT amendment Bills in terms of undermining the land rights of tribal people. It is much on the lines of the amendment that Raman Singh’s government wanted to make in the Chhattisgarh Land Revenue Code.

Pathalgadi leaders claim that it’s a legitimate people’s movement and sincerely believe that their gram sabhas under the PESA Act are actually above the elected state government. They have their own charter of demands: All the funds earmarked for the tribal sub-plan should be given to the gram sabhas for development of tribal people; the government should stop sending tribal people to jail on the pretext that they are Naxals and all police and paramilitary camps should be withdrawn from the Scheduled Areas.

The allegations of Maoist backing for the Pathalgadi movement may be true. Allegations that former Chief Minister Ajit Jogi is also causing some unrest through his protégés Kindo and Tigga may be true as well. There has been no record of involvement of the church so far but most of the leaders of the movement are Christians.

But the big question remains: has the ordinary tribal benefitted in the same way that others have from his ancestral “jal, jungle and jamin”?

How does he go about raising his voice in an increasingly opaque and politicised system?

Answers to these questions are not simple and will continue to haunt governments in this election year.