In a TV discussion on prime time programme India Legal, part of APN news channel, Editor-in-Chief Rajshri Rai discusses the problems plaguing tribunals. These include lack of infrastructure, unsatisfactory service conditions and delays by lawyers and parties. Another issue is the independence of tribunals. 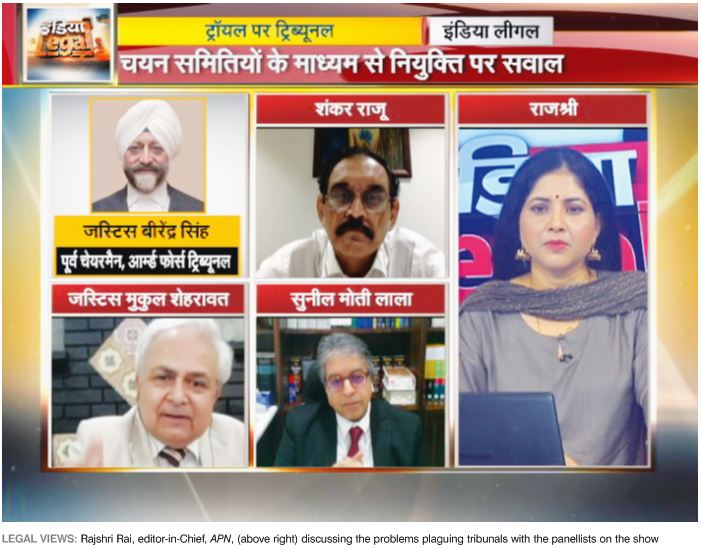 In a TV discussion on prime time programme India Legal, part of APN news channel, Editor-in-Chief Rajshri Rai discusses the problems plaguing tribunals. These include lack of infrastructure, unsatisfactory service conditions and delays by lawyers and parties. Another issue is the independence of tribunals. What they need are efficient, well-qualified judicial and technical members to ensure swifter and efficacious justice delivery and a recent apex court judgment could just see matters improving for tribunals.

Access to justice and confidence of the litigant public in impartial justice being administered by tribunals need to be restored.”  This strong observation and its urgent tone were not lost to many. It was part of a July 2021 judgment made by a Supreme Court bench of Justices L Nageswara Rao and S Ravindra Bhat, wherein provisions in the Tribunals Reforms Ordinance 2021, which fixed the term of members of various tribunals as five years, were set aside. The judgement paves the way for better recruitment of tribunal members and improved functioning.

After removing this hurdle, the Supreme Court called upon the centre to ensure that all vacancies in tribunals are filled up without delay. The Court gave this judgement following a PIL filed by Justice Mukul Shrawat, former judge, NCLT, and argued by Senior Advocate Pradeep Rai.

Originally, tribunals were set up to deliver specialised and swift justice, and to reduce the burden of caseload in courts. But with time, the system got clogged and dysfunctional. Executive interference, pendency and recruitment delays are some of the hurdles facing tribunals.

The recent judgement will have a positive impact on the tenure of National Company Law Tribunal (NCLT) members. Members who had to retire due to “legislative fiat” can now be reappointed, said Justice Mukul Shrawat, former judge, NCLT.

“Recruitment woes affect all tribunals. One reason is prolonged litigation over new rules, introduced by the government which compromised their independence. The Supreme Court ruled and an unconstitutional government made new rules. The comments of the apex court are quite harsh on the government, censuring it for bringing the Ordinance to blunt the Court decision and compromise the independence of tribunals. The rule was declared void by the Supreme Court. The Court held that the recruitment process should start three months prior to retirement,” said Justice Birender Singh, ex-Chairman, Armed Forces Tribunal.

He added that many shortcomings of tribunals have been removed by recent and earlier Supreme Court judgements. “There should be no excessive tribunalisation except in specialised areas. Tribunals should not be connected with any ministry or department and its members should get the best facilities and not be dependent on the government. Training and orientation of judges is needed.”

Shankar Raju, former member, Central Administrative Tribunal (CAT), adds: “There is a need to simplify old laws, which are hampering its functioning. To reduce the load on the Supreme Court in service matters, tribunals were formed under Article 323A. But now the utility of tribunals has reduced due to interference of the executive. The judicial body is controlled by the executive one. The Department of Personnel and Training is governing all tribunal appointments. The tenure of service had dissuaded the entry of qualified and experienced professionals, but now things will change, hopefully.”

Sunil Lalla, who has been practising law at Income Tax Tribunals, said: “Ninety-five percent of legal professionals, either at the Bar or the Bench, are happy at IT Tribunals. Here, the procedure is relatively easy as compared to High Courts. However, it is important to safeguard the independence of tribunals.’’

With the notification of the Tribunal, Appellate Tribunal and other Authorities (Qualifications, Experience and other Conditions of Service of Members) Rules, 2021, experienced lawyers can now serve as judicial members of various tribunals across the country. The new rules were framed by the government as the previous Rules of 2017 were struck down by a constitution bench of the Supreme Court in November 2019 in Rojer Mathew vs South Indian Bank.

Earlier, after the age of 62, a judge would retire. But if he is now reappointed in a tribunal, he can work for two more years. The government is moving in the right direction.

He said that the Law Commission had outlined the norms for recruitment at tribunals. “The Law Commission has suggested that a Committee led by the chief justice of India should be in charge of appointments to important posts. These include the chairman, vice-chairman and judicial members of the various central tribunals. But theses directions are not being followed,” he rued. “New rules in 2020 are common for three years for all posts. Recruitment panels have been reconstituted and they should enquire recruitment options years in advance. The government too should quickly give assent to names given by the panel.”

Then there is also the Cyber Appellate Tribunal (CyAT), which was established in 2006 as “a specialised forum to redress cyber fraud”. However, proper functioning of the Tribunal with adjudicating officers is necessary. This is because ordinary civil courts are barred from hearing claims below the amount of Rs 5 crore. Such cases can be handled only by the adjudicating officer or CAT. So non-appointments here hurts.

Justice Rajesh Tandon, ex-chairman, CyAT, said that the problem is not only manpower crunch but overlapping of jurisdictions, especially in cyber matters. Jurisdiction of this Tribunal and the police overlaps in certain areas of cyber crime and in certain criminal provisions/sections.

Coming to the Income Tax Appellate Tribunal, it was created in 1941. At that time, it was put under the finance department, but was moved to the legislative department (ministry of law and justice) a year later to ensure its independence. This arrangement continues till date, and is perhaps the primary reason that it is one of the best-performing tribunals. Other tribunals can also be made to function under the law ministry rather than with ministries against which they are to pass orders. However, there are internal contradictions.

Justice Mukul Shrawat added: “Executive interference is impacting negatively on the independence of the judiciary. The Central Board of Direct Taxes passes notifications overriding certain judgements of the Tax Tribunal. This leads to confusion. Interpretation of the law should be accepted gracefully.’’

Sunil Lalla said: “At the advocate level, overlapping is created at the commissioner level. The commissioner has the tribunal order and the CBDT order. The CBDT instruction is not binding on the Tribunal. It is binding only on the officials.”

Coming to the disposal rates at tribunals in comparison to the filing of cases per year, it is heartening at 94 percent. However, tribunals are still burdened with high pendency of cases. Also, the official data on the working of some tribunals does not portray a satisfactory picture. Lack of infrastructure, unsatisfactory service conditions and delays by lawyers and parties before the forums have been persistent problems. Justice Mittal said the concerned department should take steps to ensure better infrastructure for respective tribunals. This will lead to better functioning.

In 2017, the government merged several powerful administrative tribunals and assumed powers to appoint and remove their chiefs, triggering fears that this would undermine the authority and independence of these quasi-judicial institutions. The Finance Bill 2017, related to eight autonomous tribunals which were merged with other tribunals, and which also gave the government the power to appoint and remove members in another 17 such bodies. This move could pose a conflict of interest in cases where the government is a litigant.

Justice Mukul Shrawat is firm on the issue of independence of tribunals. He said: “The autonomy of Tribunals should not be interfered with or compromised. The process of staff selection should be faster and service conditions should be attractive to ensure that the best talent joins them. The importance of tribunals is being compromised day by day. The Supreme Court is very cautious and is quashing irresponsible notifications.”

A better bar and bench relation can go a long way in smoothening the hiccups, added Sunil Lalla. The Supreme Court in earlier judicial pronouncements had held that tribunals supplement High Courts, though they are not their substitutes.  The “principle of independence of the judiciary”, which is a basic feature of the Constitution, should be adhered to. With regard to appointments, eligibility, tenure and other protections and privileges, similar sanctity should be provided.  Then only can the intent of tribunals be realised.