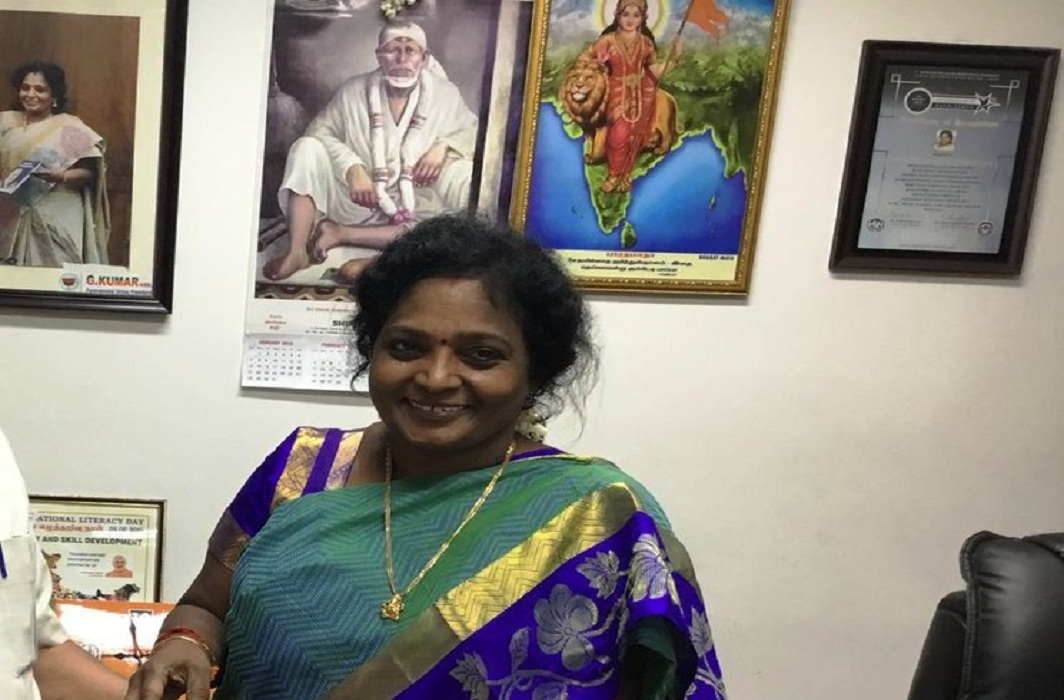 It seems that few BJP leaders skirmish with the judiciary in Tamil Nadu is growing studily in the past one year.  The latest one is an act of a judicial magistrate in Tuticorin district sending a police complaint to Pudukkottai district police a complaint registered against Dr. Tamilisai Soundararajan, President of Tamil Nadu BJP and ten of her supporters in Tuticorin. The case related to threatening and intimidating a lady research scholar Lois Sofia, who is doing a Ph.d in Canada and a native of Tuticorin. On October 25, Thoothukudi Judicial Magistrate III, S Tamilselvi gave directions to the police to file an FIR and carry out an investigation against Tamilisai for allegedly abusing, harassing and threatening Lois Sofia.

In her short one page order the magistrate observed, ‘On the basis of materials produced there is sufficient ground to register complaint against persons who came along with 1st respondent Tamilisai Soundararajan.  Since the offence alleged to be happened at airport and in respect of allegations against the respondents the CCTV footage stated to be available at airport and Pudukottai Police station has to be verified for the investigation before lodging the FIR against respondents (Tamilisai and ten others).  Therefore, the complaint is being forwarded to the police under Section 156 (3) of the Criminal Procedure Code   to investigate and register FIR against the respondents’.  The magistrate also directed the Tuticorin police to file a status report before her on or before November 20, 2018.

On September 3, 2018, Lois Sofia (28) shouted “fascist BJP government down, down” after landing at the Tuticorin airport. Sofia was travelling with her parents   in a flight from Chennai to Tuticorin.  She was just returning from Canada, landed at Chennai airport and took the Tuticorin flight.  The trouble started after the flight landed at the Tuticorin airport where Tamilisai Soundararajan also landed. While seeing Tamilisai , Sofia raised her voice and shouted.  Initially Tamilisai ignored the shouting, but she got angry when repeatedly Sofia raised the same slogans.  An angry Tamilisai called her supporters numbering around ten, inside the airport and these BJP activists retaliated by raising their voice against Sofia. The situation was brought under control after the airport police went inside the lounge.  The police cooled down Sofia and first they advised her not to shout and then they warned her not to make a scene inside the airport.  But Sofia ignored this and repeated her shouting.  Then a furious Tamilisai called the senior police officers and lodged a formal complaint against Sofia.  Accordingly the police registered a case under IPC sections 290, 505 and 75 (related to public nuisance, etc.,) On the basis of this complaint Sofia was arrested and produced before a magistrate who in turn remanded her to 15 days judicial custody. But Sofia was released the next day.

A close relative of Sofia, based in Tutocorin, on condition of anonymity said, “we have visuals to prove that Sofia shouted ‘fascist BJP government down, down’. Other than this Sofia did not say anything.  Whereas Tamilisai’s supporters intimidated Sofia and used choicest epithets against her in front of several people who were standing and sitting nearer by us.  We tried our level best to register a complaint against Tamilisai and ten others, but the police refused and after that only we have approached the magistrate’.

But an unfazed Tamilisai justifies her complaint. “Initially I wanted to ignore the shouting of that young girl.  But when she started uttering words like ‘fascist’, I realized that these sorts of words cannot come from an innocent person. I asked the girl why she is using words like ‘fascist’,. But she was unrelenting and then I realized that I should not ignore a terrorist and hence filed a complaint’.

Interestingly this is not the first time that leaders from Tamil Nadu BJP are in contradiction with law.  H.Raja, one of the senior leaders of the BJP and notorious for making sweeping comments against every one and including judiciary got in to serious trouble recently.  A month back Raja while participating in a Ganesh Chathurthi festival in Pudukottai had a tough fight with the police.  Raja was adamant that he and his party workers will celebrate the Ganesh Chathurthi and address a subsequent rally at a particular point.  The local police resisted it and told Raja that the Madras High Court had already banned any meetings or religious events in that particular place.  But Raja refused to buy that argument and vociferously argued that he and his supporters will conduct the function only at that place.  At one stage Raja started bad mouthing about the judiciary.  He said, ‘what court order …. Is the court a big …….r’.

The issue created a furor and a division bench of the Madras High Court headed by Justice C.T. Selvam, took suo motto cognizance of Raja’s behavior and initiated contempt proceedings.  But Raja, being a shrewd politician came to the court three weeks after the incident, appeared before the concerned division bench and tendered an unconditional apology.  He told the court that he was very emotional on that day and that’s why uttered those words and he also told the bench that hereafter he will be very careful while talking about the judiciary.

There is another character in Tamil Nadu BJP and his name is S.V. Sekar.  He is basically a cinema comedian. Six months back he wrote a filthy message denigrating women journalists in his whatsapp group.   Hundreds of journalists staged a big protest in front of the BJP headquarters in Chennai and over 30 journalists laid a siege in front of Sekar’s house.  Unfortunately this siege took an ugly turn when an over a dozen journalists pelted stones on Sekar’s house.  However police filed a case against Sekar.  The later moved the Madras High Court for an anticipatory bail. In an unusual move nine intervener petitions were filed by various women’ groups, social activists and a couple of journalists and they prayed the court not to grant anticipatory bail to Sekar.  The Court dismissed Sekar’s anticipatory bail petition. Then he went to the Supreme Court and the apex court gave him a relief, by directing him to go and surrender before a magistrate court in Chennai and get a regular bail. Accordingly Sekar approached the concerned magistrate court here in Chennai and surrendered and then the court granted him bail. One more Interesting information is Sekar is the elder brother of Tamil Nadu Chief Secretary Girija Vaidyanathan’s husband.  It may be recalled that the BJP commands just 2.5 to 3% vote share in Tamil Nadu’s politics and got one Lok Sabha MP who is also a union minister, viz, Pon. Radhakrishnan…

There is need for another...

Power to the promoter: Th...