Debate on farmers’ protest: Two sides of the same coin 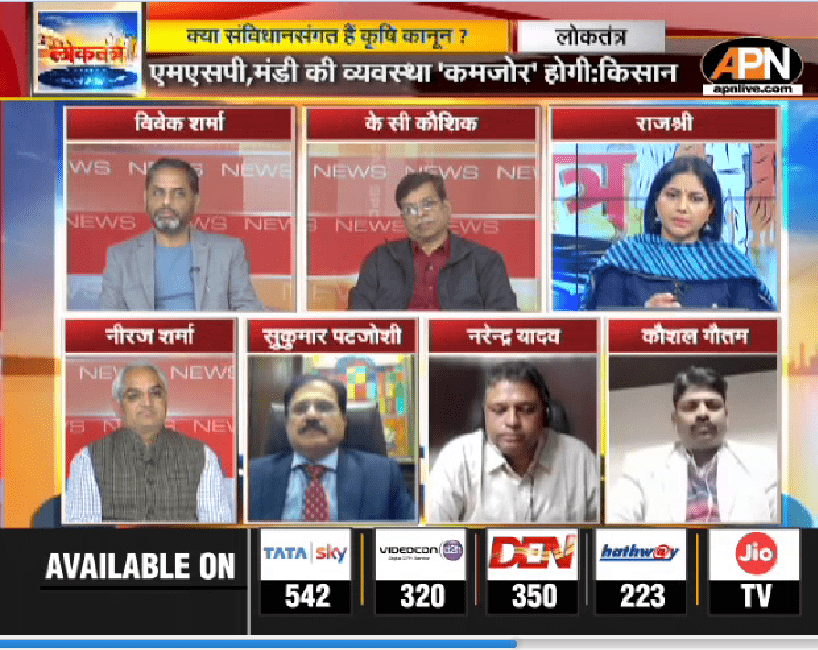 The agitation by farmers on Delhi’s borders has captured headlines across the world. For more than a month, the farmers have been braving the cold, rain and police barricades to raise their demands. APN’s popular show, Loktantra, discussed the issue extensively.

The three contentious farm laws passed by the Union government last year have stirred outrage across the country, particularly among the farming community, and more than a month has passed since thousands of farmers, braving the chilling cold and rain, hit the roads in protest against the new “agriculture laws”. While the centre remains firm in its stand not to repeal the three farm laws and maintains that these are for the greater good of the farmers, the farmers’ body sees this whole thing as an attempt to benefit the big corporate houses. The farmers are also apprehensive that once these new laws come into practice, the MSP system will be gone and the APMCs will slowly disappear. This, according to them, will negatively impact their income and will further deteriorate their living conditions.

A three-judge bench of the Supreme Court, comprising Chief Justice of India SA Bobde and Justices AS Bopanna and V Ramasubramanian on January 6 expressed disappointment, saying: “There’s no improvement in the situation at all,”

Rajshri Rai: Our Constitution gives special rights to the farmers. When this bill came, the first thing which was said was that it was an attempt to attack the empathy which our Constitution shows towards the farming community. The Supreme Court has today said that there is no improvement in the situation. What do you think on this?

Sukumar Pattjoshi (representing the petitioners in court): We have raised four issues. Our primary challenge is that of jurisdiction (technical issue).

Rajshri Rai: We have so far understood as Sukumar Pattjoshi said that there are four main issues related to this bill. Do you think that through these laws there has been an attempt to snatch the special rights which our Constitution guarantees to the farmers in the country?

KC Kaushik: As Pattjoshi has said, the primary challenge is that of jurisdiction. Agriculture is a state subject, so the government has passed the laws after putting it in the Concurrent List, which in itself is wrong. This means that the government is trying to encroach upon the rights of the state government. So, I feel there is something wrong (in the government’s approach).

Rajshri Rai: There is also another critical issue which is that of MSP. There is ruckus over the MSP. Farmers say that there should be no reduction in the MSP. Do you think the government has tried to usurp the rights of the farmers?

Neeraj Sharma: No, I don’t think so. When the Union Home Minister was in West Bengal, he said that the MSP will not be touched. Even the prime minister has said the same thing. The farmers were given an assurance that MSP was there, is there, and will be there. There will be no changes in the MSP. So, I don’t think that MSP is even an issue.

Rajshri Rai: There is yet another question that since agriculture is a state subject, why are you encroaching on this area?

Neeraj Sharma: The centre can legislate on certain subjects even if the state is not making laws on those subjects. The Indian government has the right and there is no question of encroachment.

Rajshri Rai: The petitioner, Kaushal Gautam, is also here. Sir, our few guests are saying that the government has not done something so wrong that you had to knock on the doors of the Supreme Court. What do you say?

Kaushal Gautam: The first thing is that the three laws passed by the government are unconstitutional. Agriculture is a state subject; if anyone crosses their laxman rekha, it is wrong. It is specifically mentioned in our Constitution that only states can make laws on issues related to farmers. As the Supreme Court is the custodian of our rights, we went to the top court to ask whether this Act was constitutional. The Court sent notice to the government and sought to know as to why this petition should not be entertained and the laws repealed. So far, the government has not given a reply to the apex court on this.

Rajshri Rai: The Supreme Court said that the situation is not changing, which is worrisome. What is the basis of your arguments in this case? Do you think the government has tried to disturb the federal structure through this bill?

Sukumar Pattjoshi: I cannot say whether such an attempt has been made or not. There is no ambiguity in our Constitution on who can legislate on which subjects… You will realise that this is a state subject. The main thing is that there are three other shortcomings in this Act. The government has said that there will be an agreement, so that farmers’ income will increase. However, the laws say that if in this agreement there is a dispute, the farmer cannot go to the courts, so that’s a problem. Secondly, there is nothing in the bill on the enforcement of the MSP. So, there is no security for farmers. And then, the Court should decide if this Act is constitutional or not.

Rajshri Rai: If we are saying that the Court should decide if this Act is constitutional or not, then don’t you think in a way we are encroaching on one another’s territory?

KC Kaushik: When a law is made, courts have to decide whether it is right or wrong. When it comes to the MSP, I have so far failed to understand how the MSP will be maintained. The farmers in India are not in a condition to fill big godowns. How will they do so, when they are not even in a condition to maintain themselves? Only capitalists can do this thing. The government ended the subsidy on diesel. This is just an example. So, if you can end subsidy on gas, you can do the same thing with MSP also. Now, you have taken this out of the purview of the Essential Commodities Act, where earlier agricultural produce was. When there is hoarding, what will happen? Ultimately it will give rise to inflation. The public will suffer.

Rajshri Rai: There is a fear among far­mers that MSP will be done away with, what do you say on this?

Neeraj Sharma: Things cannot run merely on the basis of fear or assumptions. You must know that foodgrains rot in FCI godowns. If you talk about the yield, we see in India there is an excess production of several foodgrains. So, if we view this with an eye that a big businessman will come and store everything in godowns, it will only be an assumption.

Vivek Sharma: MSP is never brought in via any legislation, but by the announcement of the government. This year in Punjab, the government purchased over 55 tonnes of wheat on MSP only. Then why this fear that MSP will not stay? There are two sets of situations before the agriculture bills and post the bills. Weren’t there farmer suicides before the agriculture bill was passed? As stated earlier, there are always aims and objectives for a bill. In the aims and objectives part of this bill, it is underlined that the main objective is to double the income of farmers, and there is a provision for this. As far as the federal structure is concerned, the centre has not attempted to overstep it. The centre has not touched the agriculture subject in this Act. But this Act has been passed under the category “trade and commerce of foodstuffs” which is on the Concurrent List.

Rajshri Rai: Why this objection, if the bill is passed under the category “trade and commerce of foodstuffs”?

Rajshri Rai: In India, everyone has the right to get justice and everyone is em­powered to go to the courts. But in this Act, the farmer can only approach the conciliation board or the SDM. The Act bars the farmer from going to the court. What do you think?

Narendra Yadav: In many cases, there has been a bar on approaching the courts, be it arbitration or revenue. Article 227 provides the option to move to the High Court. Even here after the collector, you can move to the High Court. So, there exists a supervisory jurisdiction. Therefore, as per my opinion, it will be wrong to say that the Judiciary has been sidelined.

Rajshri Rai: Do you think a farmer will be able to fight a legal battle against a private player, given the fact that the Act bars a farmer from moving to the courts?

Narendra Yadav: It is easier for a farmer to move to the SDM rather than going to the courts and waiting for years to get justice.

Rajshri Rai: What do you expect from the Supreme Court? Understanding the good things in this Act, it is also necessary to eliminate the shortcomings or negative things in the Act.

Sukumar Pattjoshi: It is not an adversary litigation, that one side will win and other will lose. There should be a middle path, so that everyone benefits from this Act.

Neeraj Sharma: In its December 17 order, the Supreme Court said it would be better if the matter is resolved outside the Court.

Read Also: PIL against Centre’s decision to use petrol, diesel cess for other things