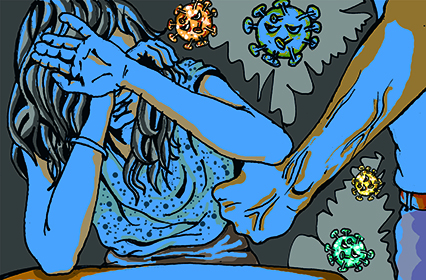 The lockdown has led to an increase in domestic violence. While the UK is examining how to stop the use of “rough sex” defence in courts, India awaits its own forward-thinking legislation

The case of British backpacker Grace Millane, who was murdered in Auckland, New Zealand, after a Tinder date in December 2018, triggered UK’s draft Domestic Abuse Bill which has now returned to Parliament.

The prosecution in November 2019 had maligned the victim by calling it a case of strangulation owing to her sexual fantasies gone wrong. Her name was dragged through the mud, while the man’s was kept anonymous via a suppression order.

This so-called “Fifty Shades of Grey” defence resulted in lesser charges owing to lack of intent—a crucial element in a murder conviction. In fact, according to a CNN report, 18 women have died of such “consensual” sex in the last five years alone.

The UK government is examining how to stop the use of the “rough sex” defence in courts to escape justice.

The murderer’s defence counsel argued that Millane had died accidentally from a toxic combination of alcohol and sexual passion.

In January 2019, UK’s draft Domestic Abuse Bill was published for pre-legislative scrutiny. The government’s response was published in February 2020. The Bill recognises that domestic abuse is a cruel and complex crime that can affect anyone, leaving physical and emotional scars that can last a lifetime. There are currently 2.4 million victims a year in the UK (aged 16 to 74), the majority of them women.

The UK seeks to “build a society that has zero tolerance towards domestic abuse and actively empowers victims, communities and professionals to confront and challenge it and to provide victims with the support they deserve”. It aims to promote awareness and put abuse at the top of everyone’s agenda. This includes creating a statutory definition of domestic abuse, making it clear that it is not just about physical violence, but emotional abuse and coercive or controlling behaviour. The definition also expands on the current cross-governmental definition to include economic abuse.

It will also protect and support victims by introducing a new Domestic Abuse Protection Notice and Order. Hand in hand, the aim is to also transform the justice response, including helping victims to give video evidence and ensuring that they do not suffer further trauma in family court proceedings. The newly created post of Domestic Abuse Commissioner will help drive consistency and better performance in the response to domestic abuse across all local areas and agencies.

The reality is that it is already established in British law that a person cannot consent to sexual activity that leads to grievous bodily harm or murder. Consequently, the rough sex defence should not exist at all in theory, but in practice, the defendant is not prevented from establishing consent and the victim is no longer alive to refute this claim.

An organisation, We Can’t Consent to This, is the main campaigner of the amendment and has assembled evidence of 67 cases in the past 10 years in which it said victims were required to come to court to deny that they had consented to physical attacks. The amendment is backed by the Labour MP Harriet Harman and Conservative MP Mark Garnier. In the words of Harman: “This is a double injustice. Not only does he kill her but he drags her name through the mud. It causes indescribable trauma for the bereaved family…He kills her and then he defines her.”

The Covid-19 lockdown has brought its own set of horrors to victims of domestic abuse. A shocking 72 percent of survivors say their abuser now has more control over their life, according to a survey by Women’s Aid. The Metropolitan police said it had made an average of about 100 domestic abuse arrests a day.

Criticism levelled at this Bill is that it has taken too long. On the other hand, the British government has successfully passed the Coronavirus Act in a matter of days to protect people from a disease. Secondly, the Bill must be underpinned by adequate, long-term funding for Councils and an increased level of resourcing to keep women safe and for the training of law forces. In addition, the Bill fails to address the plight of abused women who are migrants, hence insecure, and unlikely to seek help from the police which could result in deportation and separation from their children. Worse, abusers being all too aware of this, often use this as a threat or tactic for intimidation. Another criticism is from the National Society for the Prevention of Cruelty to Children for its failure to protect children from the devastating impact of living with domestic abuse. So, the UK Bill is not perfect, but is certainly a step down the road to achieving protection to some.

Crossing continents, India is currently ranked number one on the list of the world’s most dangerous countries for women. Lawmakers have been trying to put in place various protections for wo­men such as Section 498A IPC which punishes cruelty by a husband or his relatives with jail and a fine. Cruelty can be physical or mental, including dowry harassment.

The Dowry Harassment Act 1961 is a relatively meek act. In one section, it bars gifts, including property, and then provides several exceptions to gifts made to the bridegroom at the time of marriage “without any demand having been made”. In reality, dowry continues unabated.

More recent is the Protection of Women from Domestic Violence Act, 2005. This expanded the definition of domestic violence to anything that harms or injures or endangers the health, safety, life, limb or well-being, whether mental or physical, of the aggrieved person or tends to do so. It also includes physical abuse, sexual abuse, verbal and emotional abuse and economic abuse or harassment with a view to coerce dowry or other property.

Here, “sexual abuse” includes any conduct of a sexual nature that abuses, humiliates, degrades or otherwise violates the dignity of women, and “verbal and emotional abuse” includes insults and ridicule especially with regard to not having a child or a male child.

We know from case law that complaints can be filed against female relatives of the husband [Sandhya Manoj Wankhade vs Manoj Bhimrao Wan­khade (2011)]—so also against minors [Hiral P Harsora Vs. Kusum Narottamdas Harsora (2016)].

Also, domestic violence presupposes domesticity, and of late, even live-in relationships have fallen under the ambit. The test is loosely based on the intent of the parties and a shared household, children, social life are all indicators [Indra Sarma Vs. VKV Sarma (2013)]. A wife can continue to be an aggrieved person even after judicial separation—[Krishna Bhatacharjee vs. Sarathi Choudhury (2015)].

India has its own peculiar set of issues ingrained from eons past and still continuing. One chief reason is the deeply ingrained patriarchal society where women are essentially seen as secondary human beings with a less important role in life. This is coupled with the social evil, dowry, which if deemed insufficient, causes continual degradation, and worse, dowry deaths. In 2010, 8,391 dowry deaths were reported (World Development Report). Finally, Indian women simply do not report domestic violence, and if they do, the abuser could re-offend even harder. Also, they may not report due to a lack of resources or legal assistance.

We are, therefore, at a very distant spot from the UK where most women are educated. We, in India, are a long way off from worrying about a defence like “rough sex”, although it would be desperately welcome since marital rape is not yet recognised as a crime.

A welcome move recently was the announcement by the finance minister about a planned task force to reconsider the legal age for marriage in India (currently 18 for girls and 21 for boys). The current ages leave many girls without a college education and forever at a disadvantage. Studies have shown that raising the age would help control our population explosion and maternal health and well-being—also an educated woman raises educated children. An educated woman is less likely to suffer domestic violence in silence.

The UK Bill has now passed its second reading and will proceed to the Committee stage—where the legislation is scrutinised. The legislation should go a long way in setting right the wrongs that have ensued from the normalising of sexual violence via pornography and social media. We, in India, will await our own set of forward-thinking legislation—increasing the marital age for women to 21 in the near future. Then in this sphere, at least, men and women would be equal.

—The writer is Barrister-at-Law, Honourable Society of Lincoln’s Inn, UK, and a leading advocate in Chennai. With research inputs from Akshaya Ramalingam and Praveen PK