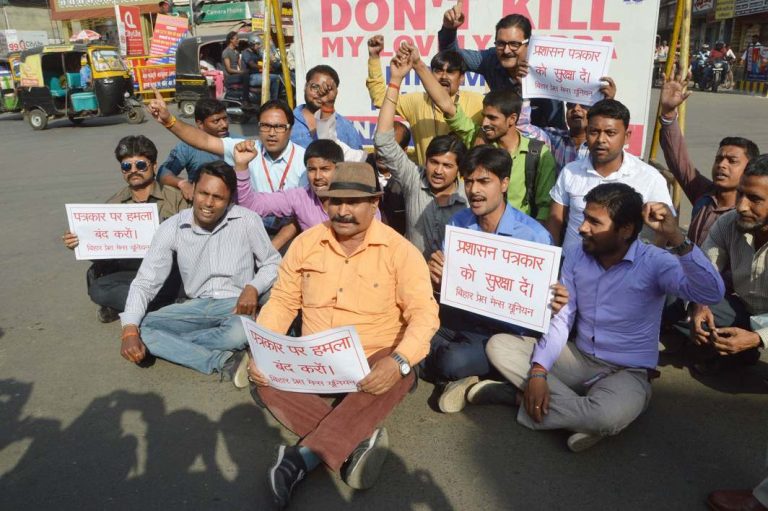 Bihar journalists demonstrating against the killing of scribes in Patna

The chilling death of three journalists within a fortnight has again shifted the focus on the profession’s vulnerability in the country. The death of Sandeep Sharma in Madhya Pradesh on March 26 and Navin Nishchal and Vijay Singh in Bihar on March 25 within a span of 24 hours also drew the attention of the international media to the dire working conditions of the press in India.

These deaths highlight what media watch organisations such as the   Committee for Protection of Journalists (CPJ) have been pointing out for long—the culture of “impunity” which led to these deaths. The CPJ’s annual report, last published in 2017, has constantly ranked India high in its Global Impunity Index. India is one of the countries where murders go uninvestigated and no one gets convicted. As per the CPJ, no convictions have taken place in the last decade. Not just that, India has also never responded to UNESCO’s requests regarding the judicial status of journalists’ killings.

According to the CPJ, those targeted mostly worked as rural and small-town journalists and reported on corruption, crime and politics. The groups that get away with these murders are criminal and political groups and government officials. Both were evident in the three deaths mentioned above.

Nishchal and Singh were allegedly run down by Mohammed Harsu, an ex-village chief who pressurised journalists in the area to write stories in favour of him and had grudges against these two. Sharma, on the other hand, had constantly reported on the illegal sand mafia operating in Madhya Pradesh and had also conducted a sting operation on a sub-divisional police officer, Indra Veer Singh Bhadouria, taking a bribe to allow illegal sand mining in the region.

This is not the first time that journalists have been killed for reporting on illegal mafia gangs. Earlier, in June 2015, Sandeep Kothari was abducted and brutally burnt to death by people linked to the illegal sand mining racket in Madhya Pradesh. He had reported on it for five years, which other journalists think made him a target.

As for the police, there has been a significant lack of interest in taking action against the guilty. Many a time, the police’s role in the death of journalists is evident. Therefore, the journalists and their relatives are left in the lurch. For example, Jagendra Singh, a freelance journalist who also published his reports on Facebook, was burnt by a group of police officials, who raided his home. He had written extensively about Samajwadi minister Ram Murti Verma and his corruption. Singh was burnt alive in front of his family members at his residence. Singh’s last Facebook post on his page, “Shahjahanpur Samachar”, was also against Verma. In his dying declaration recorded on video, Singh named police inspector Prakash Rai as being present with other police personnel while kerosene was poured on him and he was set ablaze. Crying in pain, the dying scribe had asked: “Why did they have to burn me? If the minister and his people had something against me, they could have hit me and beaten me, instead of pouring kerosene over me and burning me.” 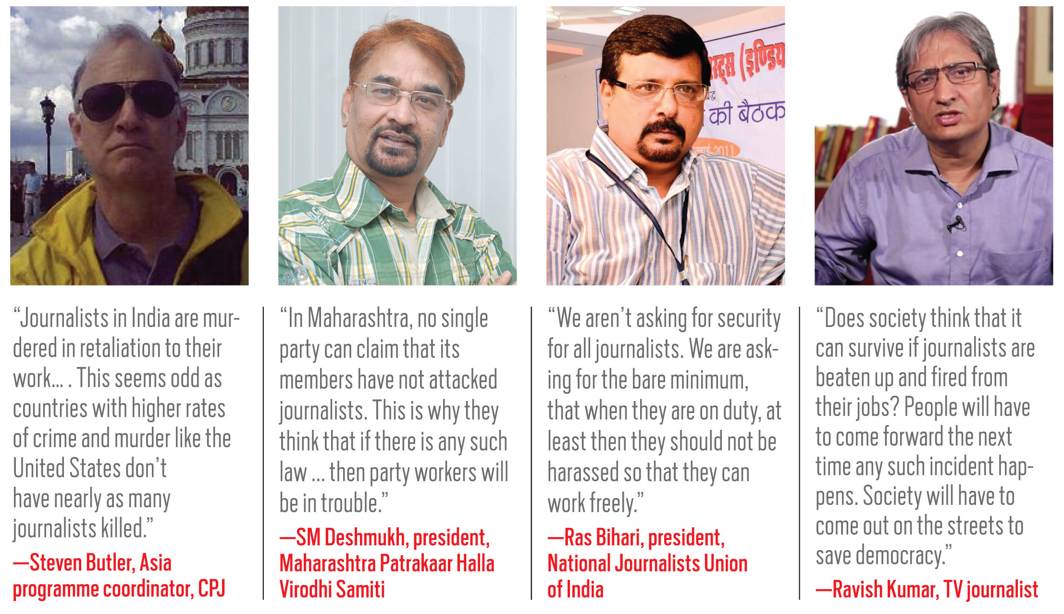 As Steven Butler, Asia programme coordinator of the CPJ, said at the 2018 BG Verghese Memorial Lecture: “Journalists in India are murdered in retaliation to their work… This seems odd as countries with higher rates of crime and murder like the United States don’t have nearly as many journalists killed. There has been not a single conviction upheld over a period of 25 years. That is a horrifying record. Murder is the ultimate form of censorship and in India, it works.”

Given the pathetic condition of journalists in India and the constant attacks on them, there has been a longstanding demand for formulating a law in this regard. The journalist community heaved a sigh of relief when the Maharashtra Mediapersons and Media Institutions (Prevention of Violence and Damage or Loss to Property) Bill, 2017, claimed to be a “landmark” law for the protection of journalists, was cleared in the assembly. However, SM Deshmukh, president of the Maharashtra Patrakaar Halla Virodhi Samiti, thinks that it is a sop given to journalists by the state government in order to keep protests at bay. He says the state government gets false credit for being the first to formulate the law for journalists, it has not done anything in reality. “We struggled for 12 years to get the Bill passed which was ultimately done in 2017. But it has not been implemented so far in the state. When we talk to the chief minister about it, the response is that it is with the president. It’s been a year but the Bill has not been formulated into law yet. This is why we have planned to protest by burning a copy of the Bill in all of Maharashtra,” Deshmukh told India Legal.

He said that no party in the state has been in favour of a law for the protection of journalists because every other party has been involved in attacking them. “In Maharashtra, no single party can claim that its members have not attacked journalists. This is why they think that if there is any such law and it is effectively implemented, then party workers will be in trouble as the Bill makes attacking journalists a non-bailable offence,” he said.

The India Freedom Report: Media Freedom and Freedom of Expression in 2017, released by The Hoot, termed 2017 an alarming year for journalists. According to the report, 11 journalists were murdered last year, 46 were attacked and 27 cases were filed. Minister of State for Home Hansraj Ahir informed Parliament that 189 cases of attacks on journalists were registered in the last three years in different parts of the country. 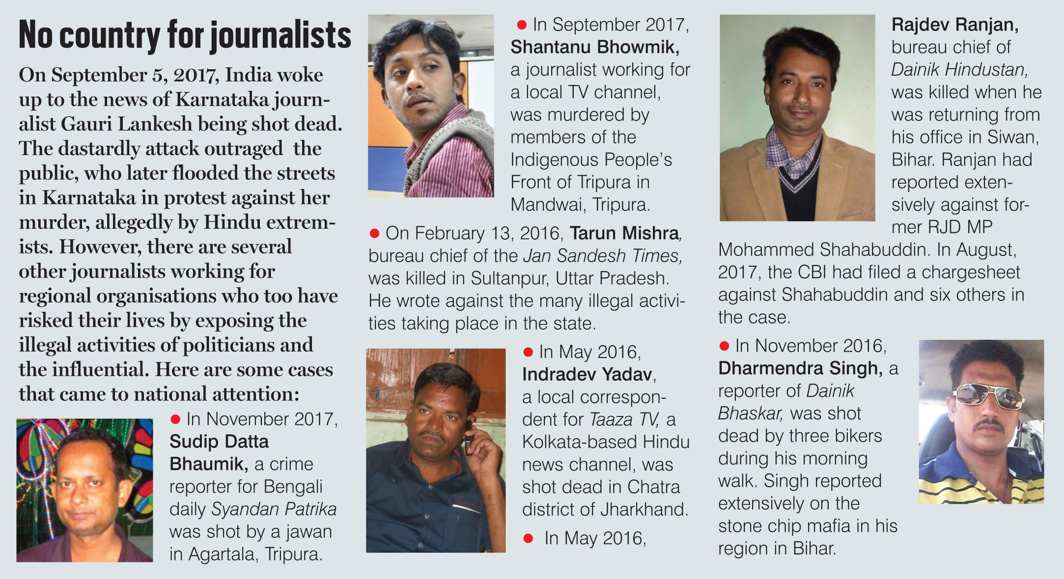 On March 23, journalists held a protest march before the Delhi police headquarters against the attacks on them while they were covering a long march conducted by Jawaharlal Nehru University students and teachers from the university campus to Parliament Street. The march was against privatisation of education and they were also demanding suspension of a professor, Atul Johri, who was accused of sexual harassment. Police misbehaved with these journalists and their cameras were snatched away and a female journalist was allegedly molested too.

Speaking of the recent attacks on journalists, Ras Bihari, president, National Journalists Union of India, told India Legal that they have been demanding a law for the protection of journalists for long. “We aren’t asking for security for all the journalists. We are asking for the bare minimum, that when they are on duty at least they should not be harassed so that they can work freely. We are also ready to abide by a guideline, if made, saying that in any controversial matter, while reporting, a specific distance should be maintained,” said Bihari.

He also expressed concern over the situation of regional reporters, given that even those in the capital are treated so badly. “This is the condition in the capital. These protests were going on in Delhi when Parliament was in session, and still journalists were assaulted. This is not appropriate and a law is mandatory to put a stop to these attacks. Though the police suspended two officers that seems eyewash.”

Bihari also said that attacks on the media should be taken up as a special issue and dealt with uniquely. Or else, what significance would an arrest have if the person got bail immediately?

As noted TV journalist Ravish Kumar said during the recent journalists’ protest in Delhi: “Does society think it can survive if journalists are beaten up and fired from their jobs? Society has to think and come forward the next time any such thing happens. People will have to come out on the streets to save democracy”. No country can survive by eliminating or weakening the fourth pillar of democracy.