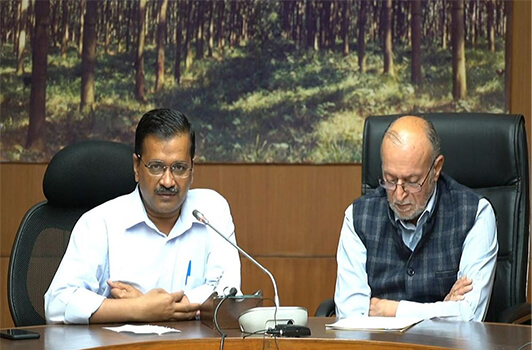 The AAP-led Delhi government and the L-G have once again locked horns. This time it is over the appointment of special public prosecutors representing the Delhi police in the Delhi riots case and the constant intervention by the centre in it. The state government has insisted that only lawyers selected by it should be appointed and not those recommended by the police or the centre.

Rajya Sabha AAP MP Sanjay Singh stated that “… independent investigation by the police and a free and fair trial are a must. The L-G and the central government are insisting on the appointment of a panel of special public prosecutors chosen by the central government. This is happening at a time when there are very serious allegations on the response of Delhi police to these riots as well as how the investigation process is going on”.

The Delhi police had written to L-G Anil Baijal over the appointment of six senior advocates who would argue the case on its behalf. The L-G sent the letter to Chief Minister Arvind Kejriwal to take a decision on it. The letter reportedly states: “Since the difference of opinion still persists, I would request the chief minister to expeditiously refer the matter to the Council of Ministers under Rule 49 of TBR of GNCTD, 1992 with Section 45 (c) of the Government of NCT Act, 1991. In view of urgency and sensitivity of matter, it is requested that the decision of Cabinet be communicated expeditiously, preferably within a week.”

AAP leader and MLA Raghav Chadha too said that under the law, specifically the CrPC, it was clear that the public prosecutor was a representative of the State and not the police. “Delhi Police being the investigating agency, therefore, should have no role in deciding the lawyers,” he said. However, under the Constitution, the L-G of Delhi has special powers to overturn any decision of the elected government, though it has to be exercised in very rare cases.

Earlier, the Delhi High Court had taken note of clashes between senior law officers in the Court over the issue of representing Delhi police. This has been going on since the first hearing in the riots case before Justice S Muralidhar, who was later shifted to the Punjab and Haryana High Court. Similar heated arguments also took place between Rahul Mehra, standing counsel for Government of NCT Delhi (GNCTD), and Solicitor General Tushar Mehta.

Mehra has always taken the stand that as per the law, it is only on the aid and advice of the council of ministers of GNCTD that the power to appoint a special public prosecutor or special counsel (under Section 24(8) CrPC) can be exercised by the L-G. He has said that the L-G has no independent power to make such appointments.

In a hearing on July 2, Additional Solicitor General (ASG) Aman Lekhi stated that it was a matter of constitutional interpretation and cannot be limited to a few lines of that judgment. Every judgment, he said, must be read with reference to its facts. While comparing the judgments cited in the present case, he said that the judgment of the Bench of the Supreme Court on February 14, 2019, was not a judgment where a law officer was appearing, but where an advocate was appointed for prosecution. But he said he was currently proceeding for cancellation, not prosecution.

Lekhi also added that matters which fell outside the powers of the legislative assembly don’t require consultation of the council of ministers. He said a law officer is a designated senior. Amit Mahajan is the lawyer on record and he can engage any senior or law officer to appear, he added. Lekhi submitted that the bench judgment only dealt with the state government and not with the right of the centre to make an appointment. The centre has the discretion to appoint any lawyer it chooses in matters which are beyond the competence of the state government and the state government cannot interfere.

However, Mehra opposed this and said the case was before this Court, making it the appropriate court. He said: “Under which provision have they filed this petition? They have impersonated the state. Can the central government do anything? Are we still in a democracy? The appropriate court today is this court….All I am saying is right now you have only heard diversionary tactics of the Central Government lawyer. They are not doing any charity here. Everything that Mr Lekhi has stated, all endeavour has been made to move where they have no basis, no leg to stand on. Everything has been looked into by the division and constitution bench in the judgments, maybe they haven’t been looked into in the way Mr Lekhi would want them to be looked into.”

He added: “Power cannot be might, might cannot be a right. With all humility I will show Milords, that center has no case. This way CrPC will be blown into winds. We’re in a federal country, you cannot enter in these areas.”

However, the Court stated that the counsel who had filed the plea did not show any document that he was appointed by the L-G to represent the probe agency in the matter. The matter was raised again when the Delhi government counsel informed the Court that the centre has no power to file this petition against the June 20 order of the trial court. He stated that the counsel have to show the grant of authorisation to file the plea as the L-G can’t approve and give clearance without the aid of the council of ministers of the Delhi government.

Sadly, the Delhi government and L-G tussle has been a prolonged one and on various issues. In 2018, Baijal found fault with a panel of eminent lawyers that the Delhi government had constituted to fight cases on its behalf in the High Court as well as to give a legal opinion. The state government had constituted a panel of 13 senior advocates in 2017 which included the likes of Indira Jaising, Colin Gonsalves, Rebecca John, Anoop George Chaudhari, Sanjay Hegde and Anand Grover. However, the principal secretary to the L-G addressed a letter to the chief secretary of Delhi, Anshu Prakash, saying that the empanelment was done without prior approval of the L-G.

On March 12, 2020, an order was passed by the Union Home Ministry stating: “With respect to the appointment of legal officers to represent cases of Delhi Police, it is decided that in respect of those cases which do not fall within the ambit of Section 24 of the Criminal Procedure Code (CrPC) e.g. Public Interest Litigations (PILs), Writ Petitions (WPs), etc., the following is ordered with immediate effect:

“i. Lt. Governor (LG) Delhi may at his own discretion, appoint Law officers(s), and/or other Senior Advocate(s)/Advocate(s), to assist such Law Officer(s) to represent Delhi Police/Government in Constitutional Courts i.e. Hon’ble Supreme Court of India and the Hon’ble High Court of Delhi.” The order further stated: “In the Supreme Court, Delhi Police can be represented by any Law officer(s) along with Advocates(s) to assist the Law officer(s) so appointed.” It is obvious that this war of words between the state government and the L-G will continue.