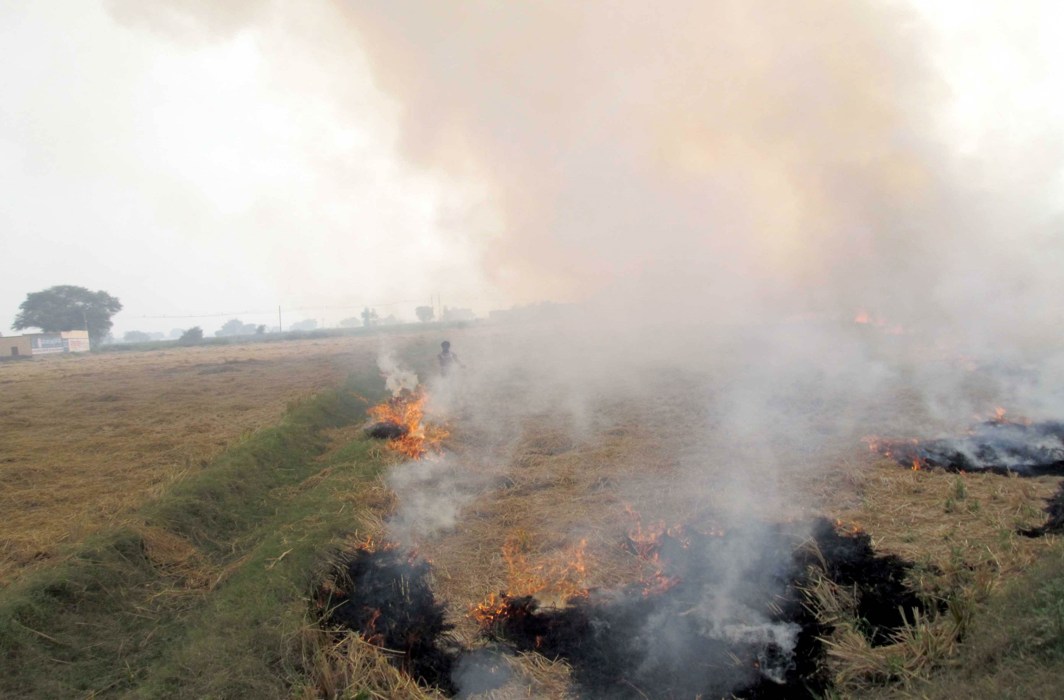 Above: A paddy field on fire along the Sirsa-Delhi highway/Photo: UNI

Though the NGT has asked Punjab, Haryana and UP to be cautious about farmers putting fields on fire and causing air pollution, the governments are lackadaisical in stamping out this problem

Come October and reports start appearing about pollution caused by the burning of paddy stubble after the harvest in the plains of Punjab, Haryana and parts of Uttar Pradesh. The problem worsens in November to beat the deadline for sowing wheat.

The narrow window between harvesting of paddy and sowing of wheat has now become a nightmare for people living in these areas as well as the national capital where the existing pollution gets exacerbated with smoke from thousands of burning fields. The smog hangs in the atmosphere till winter rains dissipate it.

Environmentalists wake up to the serious issue and organise seminars, conferences and workshops highlighting the dangers and resolve to educate the farmers. State governments too come out with lofty promises for tackling the issue by introducing technology and machinery besides using coercive methods to restrain farmers from putting their harvested fields on fire.

The National Green Tribunal (NGT) has also been seized of the menace and asked state governments to take appropriate steps. This year, the NGT sent out a caution before the normal period of such fields being put on fire. It directed the chief secretaries of Punjab, Haryana and Uttar Pradesh to constitute special cells to review the air pollution levels on a daily basis for the next one month. The panel has directed them to finalise a monitoring mechanism in the wake of reports of some harvested fields already on fire.

The NGT, headed by Justice AK Goel, passed the order on a plea filed by an activist, Ganga Lalwani, for remedial action to prevent the burning of crop residue in the NCR region.

Referring to the statistics placed before it, the panel noted that 25 to 30 percent of the air pollution in the NCR is caused by the burning of crop residue in and around Delhi in October and November every year. The petitioner said that in October 2015, the principal bench of the Tribunal in the Vikrant Kumar Tongad versus Environment Pollution (Prevent and Control Authority) and Others had directed the centre to ensure that farmers were provided equipment and financial help for the degradation of the crop residue in an eco-friendly manner.

Subsequently, the centre had launched a scheme called Promotion of Agriculture Mechanisation for in-situ Management of Crop Residue to provide assistance by way of machinery, finances and information to tackle the problem of stubble burning. The NGT had, in July last year, also directed the agriculture ministry to monitor the situation, and asked the chief secretaries of Punjab, Haryana, Rajasthan, Uttar Pradesh and Delhi to review the situation. It also held a meeting with the members of the Tribunal, representatives of Central Pollution Control Board, various ministries, representatives from Punjab, Haryana, Uttar Pradesh, Rajasthan, NCT of Delhi, nominees of IIT-Delhi, IIT-Kanpur and the National Environmental Engineering Research Institute to discuss the issue.

The meeting had recommended that a carrot and stick policy be adopted. Under this policy, those who help the environment by not burning stubble should be rewarded with incentives and those who don’t fall in line should be slapped with disincentives. A resolution at the meeting also said that modern crop management machines should be provided to farmers and decentralised compositing encouraged to convert the crop residue into organic manure.

While the NGT deserves kudos for taking up the issue before the onset of pollution, the state governments concerned have been slow in taking effective measures. Pun­jab, for instance, had reported 43,660 cases of stubble burning in 2017 but the number had increased to 45,397 in 2018. There was a marginal change for the better in Haryana where 16,032 cases were officially reported in 2017, which reduced to 13,371 in 2018.

Both the governments had announced schemes to provide subsidies on purchasing of machines that help in managing stubble. These include happy seeder machines, mulchers, choppers, super straw management systems, mould board ploughs, rotary slashers and zero till drills.

However, statistics show that these subsidies have made little impact. Even coercive measures have not worked. The Punjab government had gone ahead with levying fines on farmers who put their fields on fire but had to beat a hasty retreat following mass protests from farmers and political parties. Haryana too was wary of protests on the eve of assembly elections.

The major reason for the failure of such subsidies is that a vast majority of farms in both the states are fragmented and small. The farmers, who have been reduced to marginal farmers, say they can’t afford to purchase the machines despite the subsidies. They say the machines can be used only once a year and they don’t have enough funds to purchase and maintain them.

With the continuous erosion in the economy of farmers, particularly small and marginal ones, it is not difficult to understand their reluctance in purchasing the machines. Ironically, their problem started in the late 1990s when the introduction of combine harvesters was supposed to reduce their costs.

Till then, the farmers had to manually harvest paddy and the crop was cut right up to its roots. As prosperity grew in the region, farmers hired labourers, generally from Bihar, Uttar Pradesh and Rajasthan. There used to be reports about farmers going to these states to hire labour or to pick up labour coming on trains. With the advent of combine harvesters, farmers found it cheaper to hire such machines than pay the labour. These machines were purchased either by rich farmers or entrepreneurs who would take contracts to harvest paddy. While the prevailing rates for harvesters are around Rs 1,400 per acre, manual harvesting costs about Rs 1,700 per acre. Also, the shortage of labour, mainly due to rural schemes like MGNREGA, added to the uncertainty of getting labour.

This led farmers to opt for combine harvesters but these machines do not cut crops close to the ground and leave two-three inches of stubble. Farmers cannot manually sow wheat as the pointed stubble would injure them. Employing labour to remove stubble means sharply increasing the cost of harvest. The easier way, thus, is to put the fields on fire and burn it down.

Not only do the fires cause pollution, they also deprive the fields of nutrients which would have been rolled back along with the stubble. This is what the experts have been telling the farmers, but economics has come in the way of introducing machines to deal with the problem. Experts say that the model for renting out harvesters or taking contracts to harvest the crop could also be employed for machines like the happy seeder. Either the governments must get proactive in obtaining such machines or private enterprise must be supported to stamp out this problem.

Hopefully, such schemes will be discussed and implemented at the next meeting called by the NGT later this month.