Thank you, PM Modi for finally listening to the protesting farmers 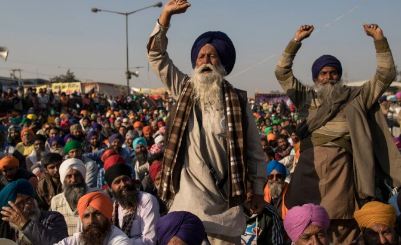 On Gurpurab, Prime Minister Narendra Modi has taken the great decision to announce the repeal of three controversial farm laws in the forthcoming session of Parliament. Hundreds of thousands of farmers were protesting against these laws for more than a year on Delhi’s borders. The farmers had some genuine fears about the misuse of the laws by corporates.

The Central Government brought the laws by way of the ordinance; later converted them into law through Parliament in an unjustified hurry without any effective consultation with the essential stakeholders such as farm unions, civil society organizations, states, and opposition parties in Parliament. The farm unions had also approached the Apex Court that stayed the operation of the three farm laws and constituted a committee of agriculture experts to examine the farmers’ grievances. But the farm associations rejected the proposal of the expert committee and continued their protest. There had been several rounds of dialogue between the Centre and the protesting farm unions but no solution could be found. There was a severe deadlock, and the protest continued for more than a year. Sadly, more than 700 farmers lost their lives during this historic protest.

The decision to repeal the farm laws is immensely welcome, and its announcement on the great occasion of Gurpurab is a heart-touching gesture. It will make a visible impact on farmers. It sends out a good message to the people that the Prime Minister listens to them and respects their contribution to the nation.

Admittedly, the farming sector also needs reforms but such reforms must be brought after taking them into confidence. Before enacting any law relating to the agriculture sector, the Centre should consult with the State Governments, farm unions, and others who are engaged in the agriculture sector which is a big sector in the sector. Enacting laws overnight does not make any sense. There was no need to impose reforms on farmers. The Centre should have referred the bills to a select committee of Parliament for extensive discussions and debate. Unfortunately, the Centre did not listen to any such view offered by the opposition and passed the bills in a great hurry.

This act irritated the farmers and they made it a prestige issue. They also doubted the government’s intention. The government failed to convince them and the protest spread like wildfire to different parts of the country. Had the government consulted the essential stakeholders before enacting the laws, the situation would have been entirely different. Prime Minister Modi’s decision to repeal them is a victory of democracy and civil disobedience. Needless to say, some political factors also compelled the government to retreat from its stand.

No political party can take the risk to lose a big state likeUttar Pradesh. The results of recently held by-elections had shown the impact of farmers’ protests in states. Had the Centre not taken the three farm laws back, the ruling party in the Centre would have faced irreparable damage in the 2024 Lok Sabha elections. It seems the Central Government calculated all these things and took a decision to withdraw the farm laws. It is a shrewd political decision. After all, democracy is a game to earn power by winning the hearts of people. The Prime Minister has rightly bowed before the “Annadata”and has shown flexibility and pragmatism. This is what people expect from a great statesman who thinks about the people.

Now the time has come when farmers should also reciprocate. They should withdraw their protest and vacate the Delhi borders and roads, blocked for more than a year. It will be a great relief for thousands of people who are facing difficulties for a long time. The farmers should also demonstrate a more flexible approach regarding the road ahead to reform the agriculture sector. No sector can claim immunity from reforms. The agriculture sector also needs some urgent reforms to boost the farmers’ income and welfare. The farm unions can send their suggestions to the government to save the farmers’ interests in farm laws. A rigid approach will not serve any purpose for the farmers.

Flexibility is a must in a democratic system. It is not a bad idea in democracy, which is about constant negotiations and exchange of views, but it should not be merely political expediency. It should be something more. The farm unions should involve themselves in the policy-making exercise. They should build pressure on their representatives in Parliament to be more sensitive towards their problems and issues.

Also Read: Punjab and Haryana High Court disposes of PIL against charging of examination fee for board examinations

Farmers send their sons and daughters to join the armed forces. Their sons and daughters sacrifice their lives to protect the “Bharat Mata”. How can these great people be anti-national? They are true patriots. Prime Minister Modi’s decision confirms this. He has taken a wise decision. Justice delayed but not denied. No government can take farmers for granted. Thank you, Prime Minister Modi for respecting the sentiments of millions of farmers.

The writer is advocate, Supreme Court of India

Did you find apk for android? You can find new Free Android Games and apps.
Share
Facebook
Twitter
Pinterest
WhatsApp
Previous articleHail to the Chief
Next articlePunjab and Haryana High Court disposes of PIL against charging of examination fee for board examinations