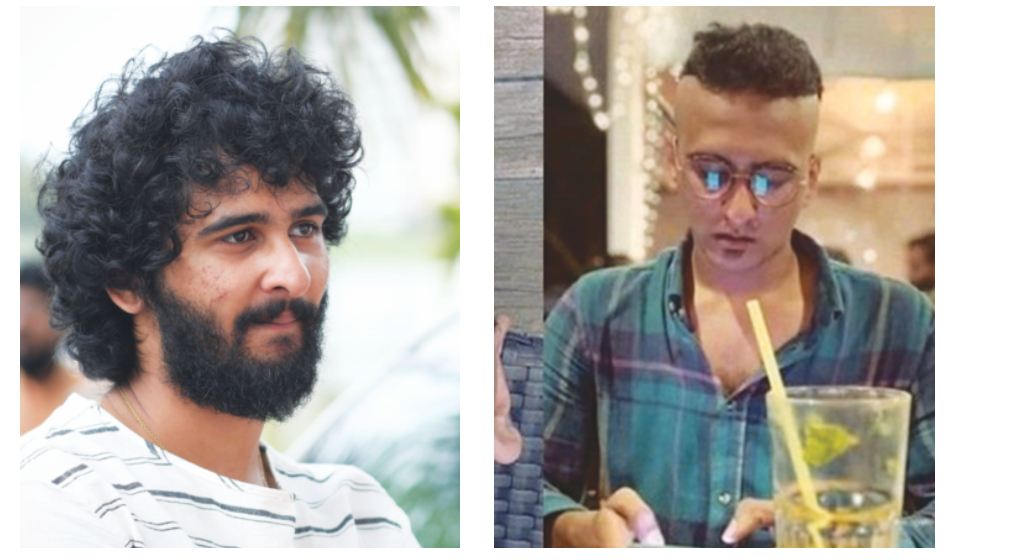 The Malayalam film industry is once again in the middle of a row. This time, it is about allegations of actors and technicians turning to substance abuse. The row is centred around Shane Nigam, a young upcoming actor, on whom the Kerala Film Producers Association (KFPA) imposed a conditional ban for indiscipline.

However, within 48 hours, the intervention of superstar Mohanlal, who is president of the Association of Malayalam Movie Actors (AMMA), helped the ban to be lifted. He met the producers and also spoke to Nigam’s mother. The Kerala government too intervened and mooted a new draft bill to curb substance abuse and other illegal activities on film sets. But matters took a turn for the worse once again when the actor in response to a journalist’s query said some of the producers suffered from mental illness. The producers reacted swiftly by extending his ban to cover other South Indian films of his.

KFPA had scrapped three major projects involving the 23-year-old Nigam in the lead role—Veyil, Qurbani and Ullasam. The scrapping of the projects, estimated to cost Rs 7 crore, has shocked film buffs and the general public. KFPA has alleged that there is rampant drug abuse on location and film sets in the Malayalam industry and wants the police to crack down on this abuse.

Culture and Cinema Minister AK Balan, who also holds the law portfolio, told reporters after a meeting with KFPA office-bearers that the government would address the issue seriously. He, however, stated that the government would interfere only if the film fraternity made a request in writing. However, former High Court judge Kemal Pasha said the government need not wait for a complaint to conduct a raid on such locations. “Possession of drugs is a cognisable offence and can invite a sentence of up to 20 years or even more,” Justice Pasha said. 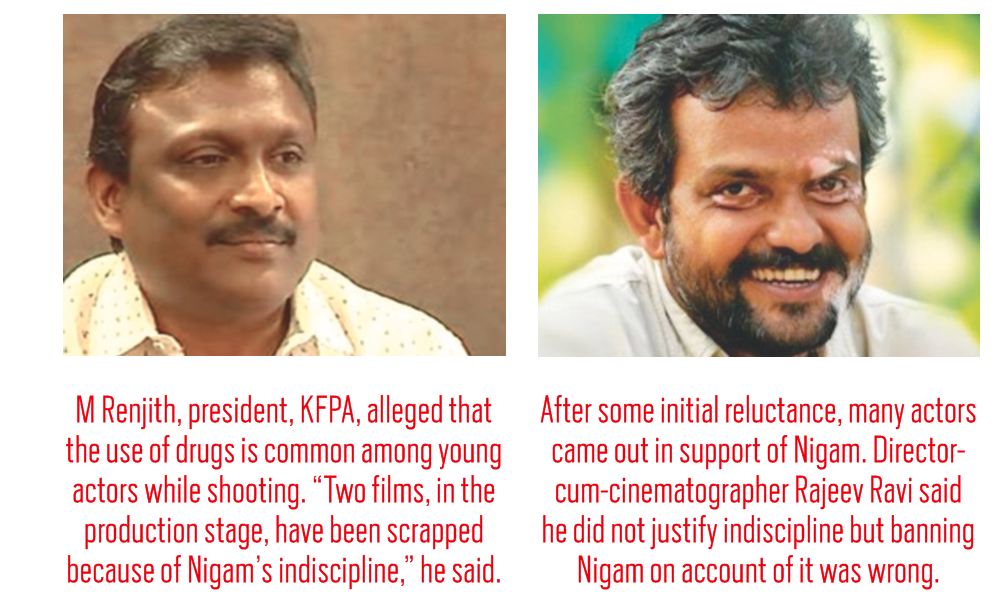 M Renjith, president of KFPA, has alleged that the use of drugs is common among young actors while shooting. “Two films, which are in the production stage, have been scrapped because of Nigam’s indiscipline and unprofessional behaviour. We have decided that no producer will sign him for now. He will be signed up only after he has reimbursed the total production costs of the two films,” said Renjith. “Both producers have lost Rs 7 crore because of him and they will have to be reimbursed the amount.” He urged the excise department to conduct a probe and raid the caravans of actors. “While the use of ordinary drugs could be detected easily, those of drugs like LSD do not show up easily,” he added.

The Association’s strong stand is being seen as a strategy to contain young artistes who are not submissive. “Substance abuse on film sets by new-age actors is a reality. There is suspected use of hard drugs and some of them cannot be detected even through smell,” said Rakesh B, KFPA’s treasurer.

The stand-off between Nigam and Joby George, the producer of Veyil, was sparked after the former violated an informal agreement on not altering his hairstyle for the film. For his role, Nigam was required to maintain long hair and a beard, but he went and tonsured his head, thereby affecting the continuity of the film. AMMA alleged that he was behaving unprofessionally and despite several warnings, had failed to turn up on time for shooting.

After some initial reluctance, many actors came out in support of Nigam, stating that it was unfortunate to ban a young actor. Director-cum-cinematographer Rajeev Ravi, who has stood by Nigam, said he did not justify indiscipline on the part of the actor, but banning him on account of it was wrong. Filmmaker Aashiq Abu, actor Salim Kumar and director Vinayan too came out in support of Nigam.

In a volte-face, AMMA later said that nobody had the right to ban (the actor). “The word ‘ban’ is outdated. We have got a complaint from Nigam stating his stand. AMMA will discuss the issue and try to find a solution amicably,” said its general secretary, Edavela Babu.

Nigam told the media that there had been denial of natural justice to him as he was not heard by the Association. “I will continue to act in movies. Producers had told me that the issue would be sorted out amicably and there would be no ban,” he said.

Nigam had played the lead role in Shaji N Karun’s 2018 release, Olu. He also had roles in Kammatipaadam and the critically acclaimed Kumbalangi Nights. As per industry sources, a truce is likely and Nigam will complete his pending projects.

Reports of drug abuse in the Malayalam film industry are not new. In 2015, actor Shine Tom Chacko was even arrested for alleged possession and consumption of cocaine. In fact, Malayalam cinema has glorified substance abuse from 1975 onwards. The song Hridayathin Romanjam in the 1975 film Uttarayanam celebrates the highs of psychedelic drugs, while the lyrics of the song Marijuana Virinju Vannal from Vijayanum Veeranum (1979), starring Prem Nazir, are about the highs of weed consumption.

From the ’80s onwards, drug trade and use have found mention in films. These include Johnnie Walker (1992), a Mammootty starrer; Pranamam (1986), a film by Bharathan where actress Suhasini is a journalist writing a feature on drug abuse; Kovalam Beach which tells the story of  a drug dealer; Amrutham Gamaya (1987) based on MT Vasudevan Nair’s script which shows Mohanlal as a doctor who resorts to drugs; Irakal (1985) by celebrated director KG George had actor Ganesh Kumar playing an engineering student who spends his days smoking opium at his father’s estate; and Idukki Gold (2013) by Aashiq Abu indirectly glorifies substance abuse.

While a truce between the actors and producers is likely soon for the smooth functioning of Malayalam cinema, it is true the young actors succumb to the pressures of the film industry and find solace in drugs. This poses a real threat to society as the young generation looks up to these actors as role models.

Lead picture: Shane Nigam shaved his head while shooting for the movie Veyil