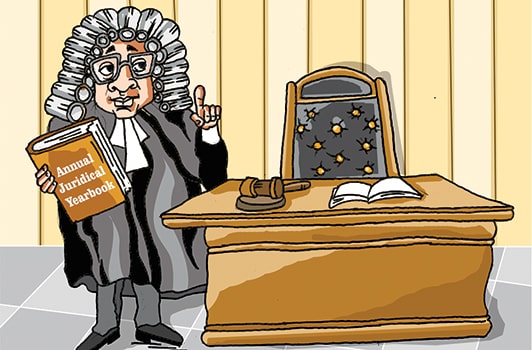 The need of the hour is to have a juridical yearbook with statistical data, details of courts, cases filed and timelines. This will help improve the quality of the justice delivery system and reduce costs

The state of our judicial system is a bit more complicated than the minister of justice being able to recount, at the drop of a hat, the cases filed, pending and decided. And then to pat himself on the back and announce that under his government, arrears have gone down by impressive percentage points as more judges have been appointed.

It is always interesting to hear from the finance minister that tax collection is up, the rupee is rising, inflation is down, GDP is up, interest rates are down. Such sweeping statements are quite acceptable as far as the department of finance is concerned and for that matter, for most other departments of the government. They gladden a citizen’s heart, though occasionally providing fodder to the opposition, and TV anchors later in the day. Such is our raucous and delightful democracy.

Even for the home department to say that crime is down or that there have been less murders, rapes and seizure of drugs and narcotics is acceptable. Though it impresses only the gullible. But facts and figures of the rise and fall of pending arrears have no meaning for a person in the deep end of the judicial system, facing trial or suing to recover his property or money or struggling against injustices heaped upon him by the State.

Every justice-seeker has his own tale of woe and every case has its own dynamics. The procedure for each case is different and so is its timeline, which may stretch to different lengths. To get justice is an individual challenge because different sets of facts and circumstances come into play. Each case can get delayed for a myriad reasons, and there may be different ways for quickening its pace. Unless someone at the very top understands the trials and tribulations of the justice-seeker, quick, inexpensive and effective justice may be a distant dream and in the end, illusory. It shall also be costly for the loser, a pyrrhic victory for the winner.

The concept of justice must be seen through the prism of citizen welfare. This is slightly different from protection of citizens’ rights. For the welfare of the citizen, particularly in the field of administration of justice, the policy principles in Part IV of the Constitution should be the starting point to frame and implement a realistic, visionary policy.

No one is denying the judiciary its central role in the administration of justice, but the role of the courts is limited only to deciding cases which the parties present. Justice is denied to the citizen if, as a victim of either State action or private acts of another citizen, he is unable to get to the court for justice and instead, continues to suffer injustice silently. This may be on grounds of financial disability, in which case he should know where to go for free legal aid. Suffering injustice may be because the citizen is ignorant of his rights, is from a backward region or belongs to a remote rural or tribal area or is illiterate or has lost his job and returned home due to the Covid pandemic. All these are instances of failure to reach justice where it is needed. It is like a man dying of fever outside a hospital, not knowing the way in. And the hospital not knowing about his presence outside its walls.

The Preamble reminds us that justice may be social, economic and political and the Constitution promises to secure justice to all citizens. In this vein, Article 38(1) requires the State to promote the welfare of the people by securing and protecting a social order in which justice shall inform all institutions of national life. According to Article 39A, the State shall ensure that the operation of the legal system promotes justice on the basis of equal opportunity. The second part of this Article mandates the State to provide free legal aid to ensure that opportunities for securing justice are not denied to any citizen by reason of economic or other disabilities. This part has already been enacted as the Legal Services Authorities Act, 1987.

However, the first part of Article 39A, which deals with the duty of the State to secure the operation of the legal system, promotes justice on the basis of equal opportunity and is of much wider magnitude. The concern expressed in this part is that the legal system must promote justice. This is a good governance directive which should be operating throughout the country. Whenever the legal system comes under stress due to shortage of judges, lack of proper infrastructure, insufficient courtrooms and delayed recruitments, poor governance is exposed.

The independence of the judiciary is a paramount principle of justice. Even judges of the subordinate courts are independent and impartial in court though under the superintendence and control of the High Courts. But there are many areas of administration of justice which are directly under the Department of Justice. It is this department’s responsibility to promote justice. This is the primary objective of an efficient legal system and is not hampered by the judiciary enjoying independence.

To deliver quick justice, the Department of Justice must have a policy which lays down how this is to be achieved. There should be a single policy document, placed annually in the public domain, to inform and educate the people and to help judges and administrators plan policies and programmes. The policy will monitor the legal system, upgrade and streamline the existing structure and help raise justice to a high standard while continually micro-managing it to improve the quality of the justice delivery system.

Ordinary men and women of India are the real stakeholders in the judicial system. If the people are wronged, they seek justice as a matter of right. They are entitled to know, as a matter of right, where they should go for justice. The justice-seeker can then assess for himself his chances for relief and chances of success (or failure).

The justice policy document must contain details of various courts, tribunals and forums, their respective jurisdictions, details of the presiding judicial officers, number of cases pending and the approximate timeline to conclude the proceedings. There should be a determination and commitment to deliver quick justice instead of building castles in the air. One of the most trite statements often heard is that “the law shall take its own course”. It’s another way of saying that the wrong-doer should not worry because the judicial system will take a long time to decide, in which witnesses may be won over, the prosecutor approached for showing leniency and courts approached for a stay of proceedings.

People’s aspirations are high, therefore, their expectations from the justice system are equally high. Everyone desires quick justice which is also effective and inexpensive. By gathering the data of the existing system, the speed at which justice is moving can become known. If there are hurdles in the way, these can be removed. By studying the legal outcome of cases of various types, the effectiveness of justice can also be known. Various factors which push up the cost of justice can be gathered and analysed for remedial action to be taken.

Justice policy is a good governance initiative. It must include all aspects of the legal system which are in the domain of the executive. The  policy shall inform the citizens of the measures the State is taking for promoting their welfare by promoting  justice. This includes what measures have been taken to speed up justice, make it more effective and reduce costs. Good governance demands that such a policy be framed and put into operation.

Some illustrations will help to demonstrate the utility of an annual report. We have no idea about how much land is under process of acquisition, or has been acquired, and how much compensation has been awarded or what delays are taking place in handing over the compensation to the landowners. Or what has been the impact of environmental laws on the environment, or are taxation laws being complied with. How many criminal cases involving crimes against women are proceeding in different parts of India or how cases under the SC/ST Act are being prosecuted, how matrimonial cases are being handled by matrimonial courts, what was the state of motor accident cases, civil suits, criminal trials and what sentences have been passed for different offences. The list is endless. The task is cumbersome but has to be done.

On the criminal side, governments depend largely on reports of the National Crime Records Bureau, but this report only contains data of crimes registered, not the speed of prosecution and outcomes. Looking at other departments of the government one realises that we have policies for nearly every government activity, be it education, health, family planning, external affairs, export and import, so why not also for justice?

The pressing need of the hour is to prepare and publish an annual juridical yearbook, like the annual financial statement (or the annual budget) containing reports with statistical data, performance indicators, cases filed/decided in each category.

The yearbook will include decided cases which lay down not just important points of law for the reference of the legal profession but also for the administration, academia, students and lay persons to enrich their knowledge about law and developing jurisprudence. Once the Department of Justice spares time from the selection process of judges, it shall find much more work in studying the many aspects of the justice delivery system, which have been emitting cries for attention that have unfortunately been falling on deaf ears.

Did you find apk for android? You can find new Free Android Games and apps.
Share
Facebook
Twitter
Pinterest
WhatsApp
Previous articleDefence Indigenisation: The Make in India Dream
Next articleSC wants NCLAT to find a way to resume virtual hearings