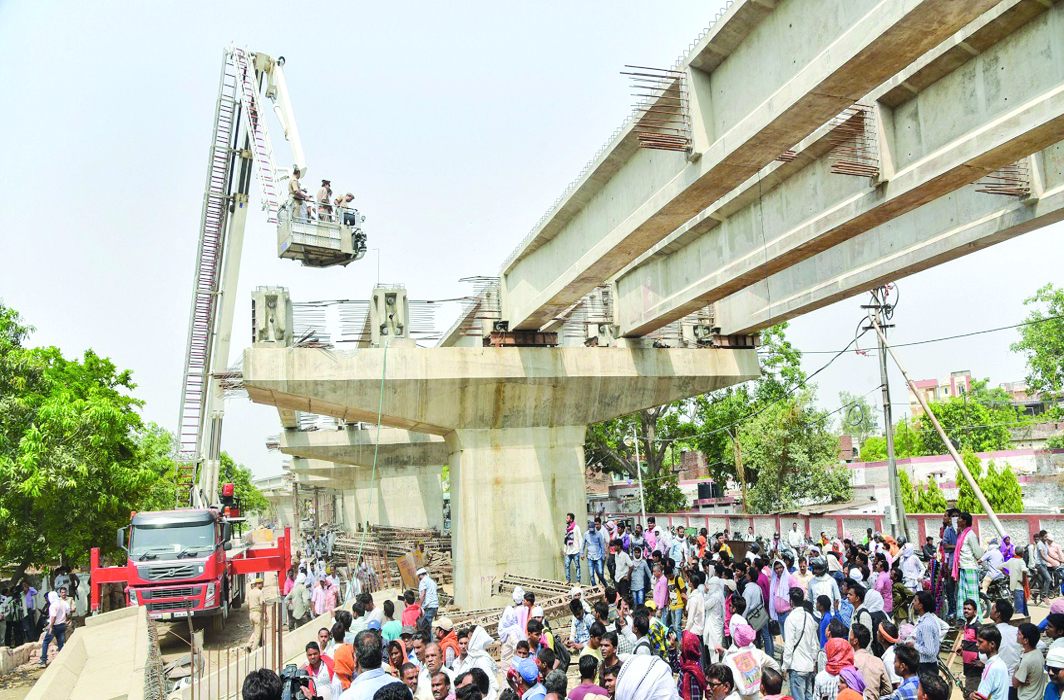 The collapse of girders at a flyover construction site in Varanasi reveals that most construction in India does not adhere to the Building and Other Construction Workers’ Act, and design and implementation of temporary structures are often left to foremen, not engineers

Accidents are often witnessed during construction and there seems no end to it. Every now and then, we come across a gruesome accident, the most recent being the Varanasi girders collapse at a flyover construction site in which 19 people were killed. The sad part is that most of these accidents are similar in nature. Yet, we fail to learn lessons. No wonder construction is the second most dangerous work, next only to mining.

With technology in mining improving day by day and construction still employing traditional and outdated methods, this industry is poised to take on the dubious distinction of being the most fatal industry. Although the official record in no way points to the seriousness of the problem, a recent study at IIT-Delhi based on statistics of the Indian construction sector from 2008 to 2012 indicates that the number of people killed annually was anywhere between 11,614 to 22,080.

Although the Building and Other Construction (Regulation of Employment and Conditions of Service) Workers’ Act, 1996, popularly known as BOCW Act 1996, stipulates certain conditions, it is anybody’s guess regarding its implementation. Let’s see the rules:

Regulation No. 41 (Overhead Protection): The employer shall ensure, at the building and other construction work, that any area exposed to risk of falling materials, articles or objects is roped off or cordoned off or otherwise suitably guarded from inadvertent entry of persons other than building workers at work in such area.

Regulation No. 42 (slipping, tipping, cutting, drowning and falling hazards): Whenever there is a possibility of falling of any material, equipment at a construction site relating to a building or other construction work, adequate and suitable safety net shall be provided by the employer in accordance with the national standards.

Regulation No. 49 (Stability of structures): The employer shall ensure that no wall, chimney or other structure or part of a structure is left unguarded in such a condition that it may fall, collapse or weaken due to wind pressure, vibration or due to any other reason at the site of a building or other construction work.

According to a research study, in building construction, 60 percent failure is due to formwork collapse, shoring collapse, inadequate shoring and lateral bracing, 8 percent due to premature removal of shore and 18 percent due to faulty materials. In most of the cases, the cost, time, and quality are also influenced by the manner in which the temporary structures have been executed at the site. Needless to say, the “temporary structure” does not deserve “temporary” treatment. Despite the obvious importance of temporary structures, lack of design or improper design of these structures is very common. Most of the time, the design and implementation of these structures are left to foremen, and the engineers rarely pay attention.

Even for important and critical structures, the design is not vetted by a third party. Where design exists, the implementation is not as per design.

Makeshift formwork arrangement with non-standard formwork components are in wide use. Shutter plates and reinforcements are misused for providing access and diagonal bracings respectively. Access to worksite and ladders are scary, to say the least. Our construction sites are ideal examples of how not to do things rather than providing a lesson on good practices.

Similar to the Varanasi incident are other accidents that have taken place in the recent past in UP—in Faizabad, Lucknow, Agra-Bharatpur—in flyover and bridge construction. In such construction, either precast girders (as in the case of Varanasi) or cast in situ girders are used which are usually top heavy and bottom light and not perfectly symmetric. This results in shifting of the centre of gravity. Also, such girders are pre-stressed. The pre-stressing is carried out in two stages for precast girders. Due to the first stage pre-stressing, the bearing area of the girder gets even further reduced. Hence, the girder becomes more and more unstable and requires external support in the form of a restraint.  The instability is more pronounced till the time girders are stitched together in lateral direction. Till this time, girders should be adequately supported to resist the lateral loads du-ring construction. Girders may collapse even with a small load caused either due to vibration or accidental hitting by a crane during the construction work.

Adherence to the provisions of the BOCW Act becomes all the more important under such conditions, besides proper restraining arrangement. It may be mentioned that restraining arrangements are needed only till the time girders are stitched together. They are not very costly as they can be fabricated even using scrap structural steel.

Although the exact reasons for the Varanasi accident will be known only after the detailed investigation is completed and reported, it is hoped that various stakeholders will learn lessons from it and such unfortunate accidents are not repeated in the future. In a civilised society, there is no place for such accidents at all.