154,225FansLike
654,155FollowersFollow
0SubscribersSubscribe
Home Top News of the Day Analysis News For the Talwars, this acquittal is the best of a bad situation 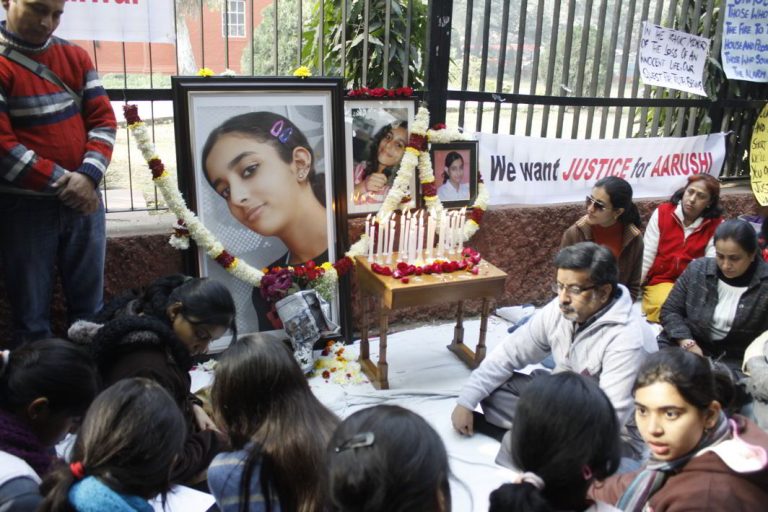 Above: A demonstration for the slain Aarushi Talwar (file picture). Photo: Anil Shakya

How much does an acquittal on the basis of the benefit of doubt mean to those leaving jail into the open? Any time in jail changes a person, forever. And it also changes the way others look at them. The benefit of doubt route may not have been the best, but at this point of time, for Rajesh and Nupur Talwar, with monumental poor judgments of the past weighing heavy, it’s the best alternative

Rajesh and Nupur Talwar, the parents of Aarushi, the 14-year old who was brutally murdered in her home on the night of May 15, 2008, were ordered to be released by the Allahabad High Court bench of Justices Arvind Kumar Mishra and Bala Krishna Narayana on October 13. However, their release will not happen till Monday.

The order was pronounced in the morning, but by the time the order was printed and handed over to the lawyers of the plaintiffs, it was late in the afternoon. Rules say that certified copies of the order must be arrived at from the Registrar. While that process was on, it was found that there was a critical spelling error in a name (of the Talwars) in the original order. Hence it went back to be corrected.

According to Chandan Rai, the Ghaziabad correspondent of APN news channel, the sister concern of India Legal, the correction may have taken a small time, but the reprinting and then again applying for certified copies took up more time.

Rai also explained to this correspondent the complex nature of the process involved in this. The high court order will be taken by the Talwars’ lawyers (as well as the defendants’ lawyers) for the release, but the process is that this will first go to the special trial court whose order had been quashed and on whose order the Talwars were incarcerated for life in the first place.

The trial court then will append its own order for release with the high court order and send it to the Dasna jail authorities. That is when the release happens. Hence the delay.

There is another issue to be remembered. The high court order is not a complete and absolute acquittal. It is possible that the trial court might be willing to move the Supreme Court against this order of the Allahabad High Court. That is why the Talwars are basically out on bail, for six months, for which they have had to pay bond amounts of Rs 1 lakh each. In case the trial court does not want to move the Supreme Court and six months have passed, the bail bond money is refunded and the acquittal judgment is deemed final.

The judgment in itself has made it clear that it was on the basis of the benefit of doubt provision. When a person or persons are being implicated on the basis of circumstantial evidence, the proof has to be iron-clad and there cannot be any second option available to the defendants.

It was also seen that reports given by the CBI and even the doctors were full of errors and often included bias. The judges, the order proves, had gone through the huge pile of evidences and arguments and has sifted through miles of possibilities and reports to arrive at a situation where they were satisfied about one thing: it has certainly not been proved that the parents had murdered their daughter.

Here are some observations of the judges from the 273-page judgment:

On Motive: “Learned counsel for the appellants further submitted that the present case is based upon circumstantial evidence. The law is settled that it is imperative for the prosecution to prove motive in such case. However, the motive suggested by the prosecution for the appellants to commit the murder of their only daughter Aarushi and domestic help Hemraj is grave and sudden provocation, caused on their finding their domestic help Hemraj in a compromising position with their daughter Aarushi in her bedroom. However, there is not even an iota of evidence on record even remotely suggesting either Hemraj was assaulted in Aarushi’s bedroom or of any sexual activity between the deceased. The motive suggested by the prosecution which led the appellants to commit the double murder emerges from the crime scene analysis and crime reconstruction report dated 26.10.2009 (Ext.Ka-93) prepared by Dr. M.S. Dahiya which is based entirely upon his personal analysis and the incorrect information supplied to him by the Investigating Officer of the Central Bureau of Investigation (C.B.I.) to the effect that blood of Hemraj was found on the pillow recovered from Aarushi’s bedroom.

“Learned counsel for the appellants further submitted that in a case of circumstantial evidence it is well settled parameter of law that the chain of circumstance existing in a particular case should be unbreakable and should point out only at the hypothesis of the guilt of the accused and there should be no alternative hypothesis available or probable in the case at all. Advancing his submissions in this regard further learned counsel for the appellants submitted that in view of the recital contained in the closure report dated 26.12.2010 (Ext.Ka-98) submitted by the C.B.I., an alternative hypothesis as against the alleged guilt of accused exists in the prosecution case itself and the alternate hypothesis so established stood proved from the evidence collected by the NOIDA police and the C.B.I. during the investigation which was tampered with by the Investigating Authority and the evidence adduced during trial suggesting outsiders’ entry inside the appellants’ flat on the fateful night which pointed out towards the innocence of the appellants but the trial court illegally failed to examine the aforesaid aspect of the matter in it’s right perspective which resulted in a miscarriage of justice. He lastly submitted that the tenor of the impugned judgement clearly indicates that the trial judge had prejudged the whole issue and was predetermined to convict the accused-appellants. The impugned judgement which suffers from illegalities, perversities and infirmities which are apparent on the face of the record cannot be sustained and is liable to be set aside.”

On no direct evidence: “Admittedly, in the present case there is no direct evidence on record proving the complicity of the appellants in the commission of the double murder of their only daughter Aarushi and their domestic help Hemraj. It is a case of circumstantial evidence.”