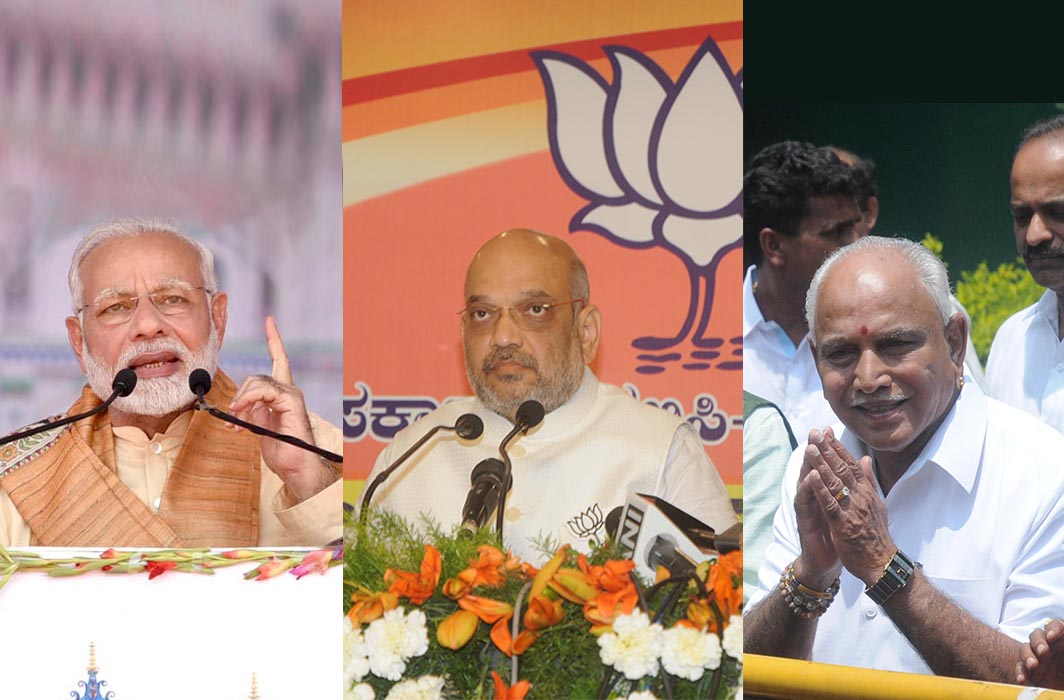 By swearing-in BS Yeddyurappa as chief minister, Governor Vajubhai Vala has given the BJP a chance for rampant horse trading but is a larger BJP plan at work

Despite the obvious lack of legislative strength to prove the BJP’s majority in the Karnataka Vidhan Soudha, BS Yeddyurappa was, on Thursday (May 17) morning sworn-in as chief minister by Governor Vajubhai Vala.

Yeddyurappa’s swearing-in ceremony came hours after the Supreme Court, in an unprecedented midnight hearing of an election-related case, refused to stay Governor Vala’s decision to invite the Lingayat strongman from Shikaripura to form a government, even though, with 105 legislators (including one independent), the saffron party was still eight seats short of a simple majority in the Karnataka assembly.

The Supreme Court bench of Justices AK Sikri, SA Bobde and Ashok Bhushan, which granted the relief to Yeddyurappa is expected resume hearing the petition filed by the Congress party on Friday (May 18). If the legal precedent set up by the Supreme Court in March 2017 (while adjudicating on a similar electoral dispute over the Manohar Parrikar-led BJP staking claim to form the government in Goa despite the Congress emerging as the largest party in the polls), is anything to go by, the bench could very well curtail the 15-day time given to Yeddyurappa by Vala to prove his majority in a floor test to just two days.

The decision of the Supreme Court, if at all it comes as early as Friday, would only act as a catalyst for more intrigue in the political drama that is unfolding in the southern state.

As things stand today, there are two distinct eventualities that might unfold when Yeddyurappa decides to face a floor test in the Karnataka floor test. The Lingayat leader, backed by the money and muscle power of the BJP and his national president Amit Shah’s chicanery, could survive the floor test if at least eight legislators from the Congress and JD (S) decide to defect during or abstain from voting in the floor test. This would lead to the disqualification of the Opposition MLAs who defy their party’s whip to help the BJP, bring the strength (and the half-way mark) of the Vidhan Soudha down and thereby aid Yeddyurappa’s survival in power.

The other eventuality is that the Congress and JD (S) – which together enjoy support of 117 MLAs; including one each from the BSP and KPJP) – manage to keep their flock together and Yeddyurappa loses the floor test and is forced to resign. If this were to happen, the political players in Karnataka will be back to the drawing board and the strings to who returns to power will then be back with Vajubhai Vala, whose role in refusing to entertain the request by the Congress-JD (S) combine to stake claim for forming the government, is already being attributed to his antecedents as a dyed-in-wool RSS man with close ties to Prime Minister Narendra Modi.

But there’s another interesting speculation that is growing steadily in the political grapevine of Karnataka. The absence of Narendra Modi and Amit Shah at Yeddyurappa’s swearing-in ceremony (the duo have not missed a single swearing-in ceremony of a BJP chief minister since 2014 and have in fact made sure that all chief ministers of BJP-ruled states and robust number of central ministers stay in attendance too) and the circumstances in which the BJP was forming its government in Karnataka have led many to believe if there’s a more sinister political ploy ready to unfold in the coming days.

There is a feeling that if the apex court grants Yeddyurappa just two days to prove his majority, the party top brass in New Delhi may not go all out to help him poach legislators from the Congress and JD (S).

That the Modi-Shah duo has not been too eager to see Yeddyurappa as chief minister (projecting him as the CM candidate was more of a compulsion for attracting the Lingayat vote and preventing him from sabotaging the campaign) was evident during campaigning when Modi and Shah tried to keep a distance from the corruption-tainted Yeddyurappa at election rallies. Unlike 2008, when Yeddyurappa led the BJP to form its first government in Karnataka (and the south), Modi and Shah did not give the Lingayat stalwart a free hand in candidate selection this time; in fact many of his confidantes – including his son Vijayendra and Udupi MP Shobha Karandlaje – were denied tickets despite his strident lobbying in their favour. The BJP top brass instead relied more on Yeddyurappa’s rivals – the infamous Reddy brothers of Ballari and Union minister Ananth Kumar – during candidate selection while Shah micro-managed the campaign strategy.

If Yeddyurappa loses the floor test, there is a buzz, the BJP may swallow the embarrassment with its eye set on a larger agenda – sidelining Yeddyurappa by replacing him as the leader of the legislative party with someone more pliable – perhaps Hubli-Dharwad legislator and former CM Jagadish Shettar.

A defeat in the floor test could also throw up two scenarios – first, Modi forces Vala’s hand to impose President’s Rule in the state either by dissolving the state assembly or by simply keeping it in suspended animation. Second, the BJP could take the moral high ground by claiming that it had failed to prove a majority and thus out of respect for democracy and the constitution was willing to see the Congress-JD (S) combine stake claim and prove its majority.

In either case, Modi and Shah will have time to find a man of their choice to replace Yeddyurappa while also finding a way to deal with any possible rebellion that the Lingayat leader may try to trigger, as he did when he was forced to quit as chief minister in the aftermath of the corruption allegations made against him during his first chief ministerial stint.

Allowing the Congress-JD (S) combine to come to power will also give the Modi-Shah duo a to give their managers to work on legislators from this combine who are willing to switch loyalties and join the saffron fold. Once they have enough legislators willing to defect, the well-mastered strategy of the BJP (seen earlier in Arunachal Pradesh and Uttarakhand) could be unveiled by forcing the government to face a trust vote and ensuring that it is defeated. The duo can then have President’s Rule imposed or simply let the BJP stake claim once again but not under Yeddyurappa.

It is still a long way to go before we know how the political drama in Karnataka will actually unfold. What is certain for now is that while the state did not throw up any clear winners in the recent assembly polls, the loser was unambiguous – the Karnataka voter.