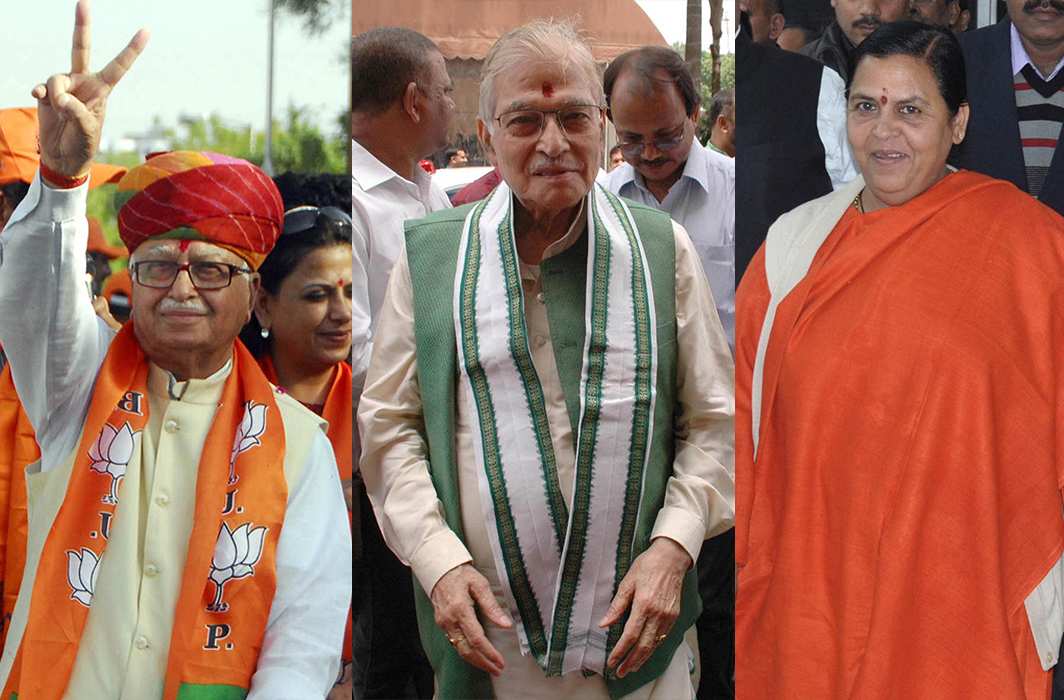 The Modi government is actively pursuing the issue of criminal conspiracy charge against BJP patriarchs LK Advani and Water Resources and Clean Ganga Minister Uma Bharti in the Babri Masjid demolition case of 1992.

The conspiracy charges against Advani and 19 others, including Joshi and Bharti, were dropped by the special court in Rae Bareli, which is conducting the trial of those charged with the mosque demolition. The special court’s decision was upheld by the Allahabad High Court in May, 2010. It was only in February, 2011 that the Central Bureau of Investigation (CBI) had come in appeal to the Supreme Court against the high court’s decision.

The Supreme Court under the then chief justice HL Dattu had issued notices to Advani et al in March 2015. In September 2015, the CBI assured the court that there was no political interference from the government, and that it pursued the case on its own merits.

In March, 2016, Justice V Gopala Gowda recused himself from hearing the case, though he did not cite any reason. On March 6, 2017, Justices PC Ghose and Rohinton Nariman expressed the opinion that the conspiracy charges may be revived.

While the judges will assess the issue on legal merits, there is no escaping the political overtones of the Babri Masjid demolition case.

As a matter of fact, it was during the first National Democratic Alliance (NDA) government of Prime Minister Atal Bihari Vajpayee—when Advani was the Union home minister and Dr Joshi was the Union minister for human resources development, and Mr Arun Jaitley was the law minister—that the Rae Bareli court was trying the case against the “instigators”, which included Advani, and another case against the unnamed “kar sevaks”, who were directly involved in the act of demolishing the structure of the mosque. Jaitley at that time had said that the conspiracy charge was dropped on technical grounds and that in law, many cases are decided on technical grounds.

Now the NDA is again in power at the centre, this time under Prime Minister Narendra Modi, who forged ahead as the prime ministerial candidate of the BJP in the run-up to the 2014 Lok Sabha elections, much against the wishes of Advani. It seems that Modi, Jaitley and others are not willing to be seen rescuing Advani from the legal brambles of the case.

The Modi government would claim that unlike Congress it would not pressurise CBI to do its bidding, and that the law will take its own famous course. But the government’s neutrality is not without its political overtones. It would seem that the Modi and BJP president Amit Shah and others may want to use the pretext of the ongoing trial against Advani and Joshi so that their probable claims for the presidential post—which will fall vacant in July when incumbent Pranab Mukherjee demits office—are laid to rest. Speculation is rife that Rashtriya Swayamsevak Sangh (RSS) is in favour of Joshi being the BJP’s presidential nominee.

It is quite likely that Modi would want a man who is much younger and who is in sync with the present BJP leadership, and he would not want his choice for the president’s office to be tied with considerations of deference to the party’s elders. One of the sweeping changes that Modi has brought about in the party and in the government is not to allow any one above the age of 75 to hold any position.

Uma Bharti is one of the chief ministerial nominees if the party were to win the Uttar Pradesh assembly elections, whose results are due on March 11. The Babri Masjid demolition case would be useful in cutting off her bid to the highest office in the state.