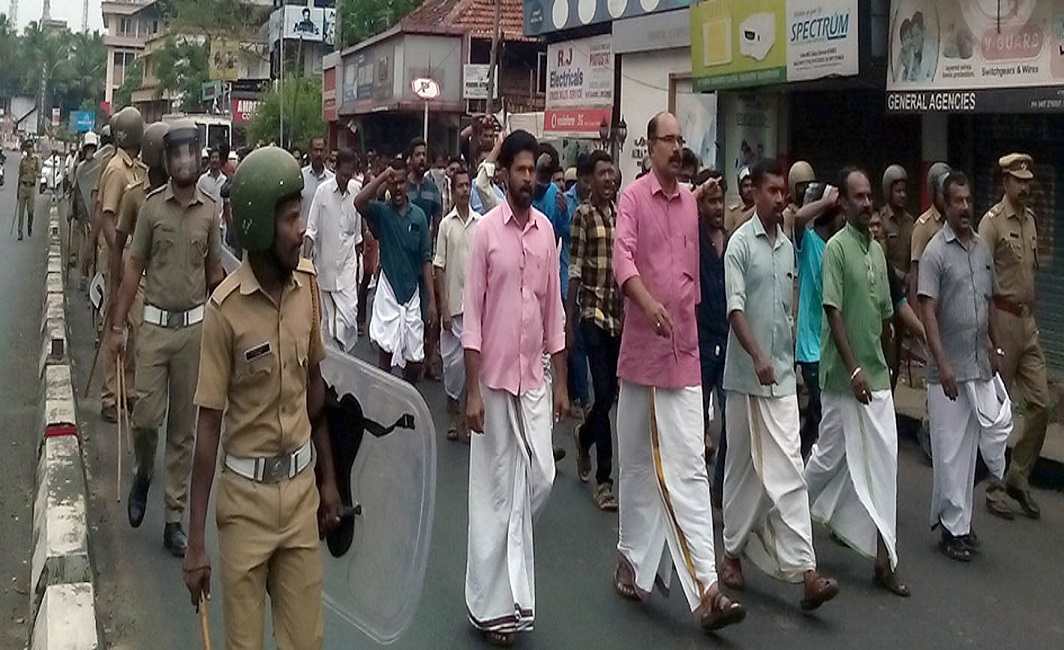 The BJP-RSS push to impose the draconian Armed Forces Special Powers Act (AFSPA) in violence-prone Kannur is more a strategic move to put the state government on the back foot rather than a valid appeal. Luckily, there are no takers

Kerala presents a largely peaceful political landscape where violent flareups are rare. But Kannur district stands out as an anomaly. Clashes between the CPM and BJP-RSS workers, frequently claiming lives, is indeed a blot on God’s Own Country. But Kannur cannot by any stretch be equated with violence-torn Kashmir or with the states in the North-East where the army has been deployed and the Armed Forces Special Powers Act (AFSPA) enforced.

However, if the state BJP and the RSS have their way, AFPSA would be enforced in this northern district of Kerala. Luckily there are no takers, as of now, for this preposterous demand triggered by the gruesome murder of P Biju, an RSS functionary, in Kannur on May 12 allegedly by the CPM cadres. But the local BJP members have certainly started pushing for some severe central government intervention.

Kannur is one place where the BJP has been denied the right to do independent political work by the CPM. If we work, the CPM eliminates our cadre and leaders in a well-planned effort. We have approached the chief minister’s office. In the last 11 months alone, we have lost half-a-dozen of our workers. How can we depend on such a government? AFSPA is the only solution in Kannur,” BJP’s state spokesperson MS Kumar told India Legal.

A delegation of BJP state leaders even met Governor Justice P Sathasivam here and submitted a plea which urged him to impose AFSPA in Kannur. The governor, a former judge, has declined any direct intervention in the matter. Rather, he thought it wise to pass on the memorandum to the chief minister’s office, calling for his opinion on the issue and has also directed the CM to take steps to ensure peace prevails in the region.

In response, Chief Minister Pinarayi Vijayan shot off a reply to the governor’s office which said: “There is no situation existing in Kannur which calls for the imposing of AFSPA in the district. The peace meetings and strong steps taken by the government have ensured peace in the last three months and Friday’s (May 12) killing needs to be seen as an isolated incident so far.’’

Kannur is certainly not as peaceful as Vijayan claims it to be. But playing into the hands of the BJP is also not something which the CM would want. More-over, any uncertainty surrounding the AFSPA question in Kannur would not be in the best interest of the state government. Hence, downplaying the present bout of violence was perhaps the best bet before Vijayan and he did just that.

The AFSPA in its present form is derived from the draconian special powers ordinance promulgated by the British in 1942 to suppress the Quit India movement. In Independent India, the first states where AFSPA was imposed were Assam and Manipur in 1958 when the Naga National Council fermented trouble in the North-Eastern part of the country asking for a separate nation.  The Act was itself then known as the Armed Forces (Assam and Manipur) Special Powers Act 1958. From Assam and Manipur, the Act finally engulfed all the seven sisters of the North-East. At one point of time, all of these states or designate parts of it came under the AFSPA.

By invoking AFSPA, the BJP has achieved two objectives—setting the cat among the pigeons in the CPM camp and forcing the state police to act

In 1983, at the height of the Sikh militancy, AFSPA was also promulgated in Punjab. Although the Act had the same provisions as it did in the North- East, it included two additions—subsection (e) was added to Section 4 which meant “any vehicle could be stopped, searched and seized if suspected of carrying proclaimed offenders or ammunition” and Section 5 was added which meant “a soldier had the power to break open any lock if a key was withheld”.

Though repealed from Punjab in 1997, the Act operates in various parts of the North-East and Jammu and Kashmir continues to be under AFSPA since 1990. However, Tripura withdrew the Act in 2015.

The BJP’s demand to impose AFSPA in Kannur has comes as a shocker for the legal fraternity in Kerala. Many say that the Act, which is a draconian one, going against the basic tenets of the constitution, should never be used anywhere in the country and the BJP in its political frustration over Kannur has certainly gone overboard.

Advocate Kaleeshwarraj who is a criminal lawyer practicing both in the Kerala High Court and the Supreme Court  minces no words when he attacks AFSPA . “It is simply a draconian law that is a misfit in any working democracy. Even if there is some point in saying that some of the established political parties like the CPM or the BJP show violent traits occasionally in Kannur, it is something that needs to be addressed differently. You cannot counter such violence with state terrorism,” Kaleeshwarraj told India Legal. He adds that the Act is promulgated for dealing with far more complex issues like the involvement of international forces or when there are national security concerns.

The BJP’s demand to impose AFSPA in Kannur has comes as a shocker for the legal fraternity in Kerala. Many say that the Act, which is a draconian one, going against the basic tenets of the constitution, should never be used anywhere in the country and the BJP in its political frustration over Kannur has certainly gone overboard.

CP Udayabhanu, Kerala’s special public prosecutor, says the track record of AFSPA is so sorry that no sane government should even think of promulgating it anywhere in the country. “Show me one place in India where AFSPA has been successful in improving law and order. If it was, Kashmir should have been peaceful by now. And there would have been no violence in Manipur. Why did Irom Sharmila protest all these years if this one law could fix everything? In Kerala, there are no issues which cannot be handled by the state police. Such draconian laws have no place here,’’ he told India Legal.

By invoking the name of AFSPA, the BJP has necessarily achieved two objectives—set the cat among the pigeons in the CPM camp and forced the police to act. In a little over 24 hours since the AFSPA debate kicked off, the killers of Biju, have been identified and two of them have already been nabbed. The CPM is perhaps very well aware that the BJP, pushing for central government intervention in Kannur, will have to be mollified.

In Kannur, people continue to live in fear. In the last few decades, more than 200 have perished in political violence. In the last year alone, since the Left came to power, eight lives have been lost. MA Baby, CPM politburo member, says Kannur’s woes can only have a political solution. “There is no use  blaming one another and giving numbers of how many have been killed on either side. No human being should be killed for whatever reason. To stop the killings, there need to be tough administrative efforts taken by the state government, whichever party is in power,’’ he states.

At the core of the problem is the power struggle in Kannur, with both the CPM and the BJP-RSS combine fighting to gain dominance. Legal experts reiterate that letting lose AFSPA in such a landscape would only backfire. “You are only adding state terrorism to the complex situation which means there will be more victims. AFSPA will only add to the problem than offer a solution,” notes Kaleeshwarraj.