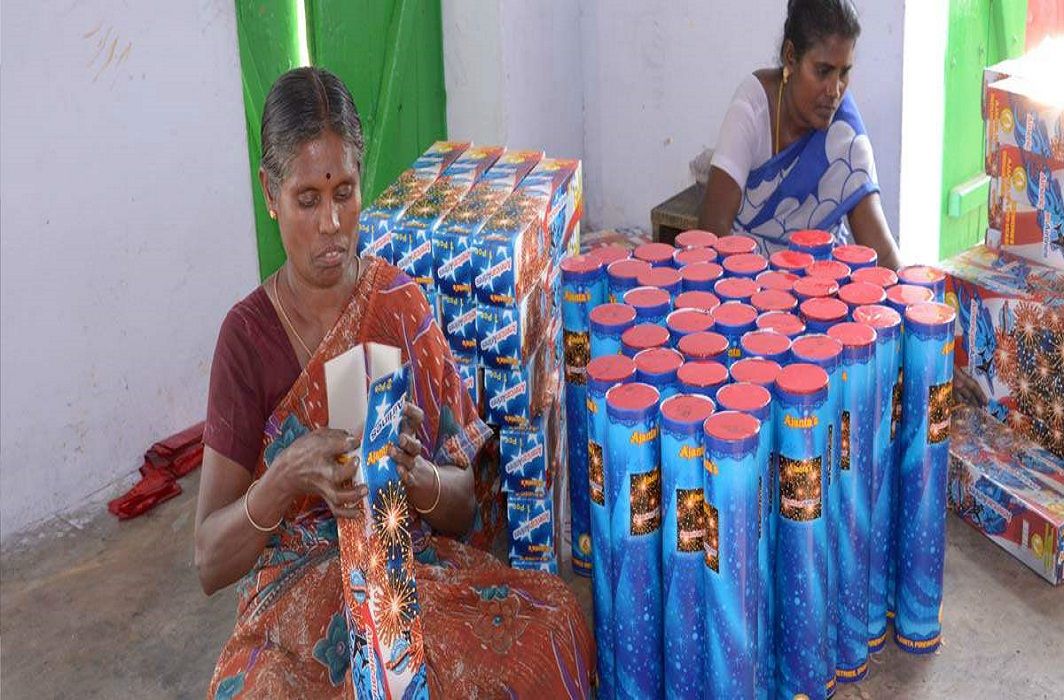 Above: Women laborers working in a firecracker unit

Four reasons are demonetization, GST, dumping of Chinese-made cheap goods and SC ban on the sale of firecrackers

The gaping cash hole that demonetization created, the 28 percent GST, dumping of Chinese-made cheap goods and now the Supreme Court ban. Four critical issues have virtually pushed the fireworks industry, much of which is concentrated in the Sivakasi town of central Tamil Nadu, to the brink of collapse.

The Supreme Court, on October 13 refused to lift its blanket ban on sale of firecrackers in Delhi-NCR. The bench comprising Justices AK Sikri and Ashok Bhushan ordered citizens to burst the already bought crackers. The traders had sought permission to sell crackers for a day or two before Diwali and had also sought relaxation of the Court’s October 9 order banning sale of crackers in the NCR region. However, the court had turned down their request. The Supreme Court’s refusal comes as the third blow for the traders and manufacturers after demonetization and GST.

Much before the Supreme Court’s decision, the government’s demonetization decision had hit the fireworks business badly. The demonetization decision almost crippled the hugely cash-oriented industry. The fireworks industry is largely labour oriented and heavily depends on the rural workforce. The village of Sivakasi itself has over 800 factories and Sivakasi alone contributes to 90 percent of the country’s fireworks industry with a turnover of around Rs 2,000 crores an year.

Apart from the direct employment that the fireworks industry provides to around 8 lakh (unskilled) workers, this industry also supports a printing industry which produces the wrappers and covers for the crackers.

But demonetisation hit the industry real hard. “This year the production had already come down. The manufacturing process went down drastically in November-March,” Tamilselvan, President of the Indian Fireworks Association told India Legal in a telephonic conversation from Sivakasi. Reports indicate that production had already dropped by 50 percent this year before the Supreme Court ban.

Most hit by these developments are women employees. Women constitute the major part of the labourers for this industry. Despite the huge risks involved in the production of crackers, this is the only job known to the rural women of Sivakasi and nearby areas. “This is a 90 percent labour oriented industry. Most of the workers are rural women. We have to distribute them the weekly salary by cash. Maximum limit on cash withdrawals such as 10 or 20,000 had severely affected this industry,” he said.

After demonetization, another major blow for the industry came in the form of the Goods and Services Tax. Fireworks, for some reason best known to the GST Council, were kept in the highest tax bracket of 28 percent. Before the imposition of GST, the traders had to pay a VAT of 14.5 percent on crackers. After the tax rates were announced, the workers of the industry had gone on an indefinite strike in Sivakasi since June 30 last year. They withdrew their strike only after the Tamil Nadu government assured to raise the issue in the August GST Council meeting. However, no favourable result came out of the meeting for the traders.

“This 28 percent GST on fireworks is huge. People would have not bought any crackers themselves. Crackers aren’t a mandatory product, it can be skipped. By introducing such exorbitant rates, the buyers would have themselves refrained from buying crackers,” said Tamilselvan. The business of corrugated boxes which are used to pack the crackers have also come down heavily. The GST levied on these boxes is 12 percent, but the demand has come down.

Apart from these two major blows, the Indian fireworks traders have another problem to deal with—the Indian market being infiltrated by Chinese crackers. After the increased GST rates it has become impossible for Indian traders to fight with the Chinese crackers which are way cheaper than the Indian variety. They are also harmful and contain chemicals that are prohibited in India. China tops in terms of annual fireworks production whereas India ranks second.

According to the Tamil Nadu Fireworks and Amorces Manufacturers Association, the share of Chinese crackers in the Indian market has doubled up to 40 percent. They get into the Indian markets illegally. They are lethal for humans. The Indian fireworks industry, whereas, is bringing up ways to manufacture eco-friendly crackers. “We ourselves do not produce smoke and sound emitting crackers. The industry is moving towards greener crackers. Moreover, we are permitted to manufacture and sell firecrackers under the Explosives Act. It all takes a little time, the court judgement came all of a sudden,” Tamilselvan said.

No business in Sivakasi

The apex court’s decision to ban crackers in Delhi-NCR turned down all hopes of the manufacturers to earn some profit. This year, not only no new variety of crackers were produced but unlike the past years the village of Sivakasi witnessed no bulk orders for crackers. Although afterSeptember 12, when the Supreme Court bench headed by Justice Madan B Lokur relaxed the firecracker ban with some guidelines, it had given the traders some hope. The September order the top court issued 500 temporary licenses and also ordered to clear off the existing stock for this Diwali. However, no bulk order was placed from Sivakasi for the Delhi NCR region.

“This year the distributors of Delhi-NCR did not order from Sivakasi”. After the September 12 order, two three truck loads of crackers were ordered but apart from that no bulk sales took place. The Delhi stock must have been brought from the nearby cities of Rohtak and Agra,” said Tamilselvan. The existing stocks were also shifted to other parts of the country.