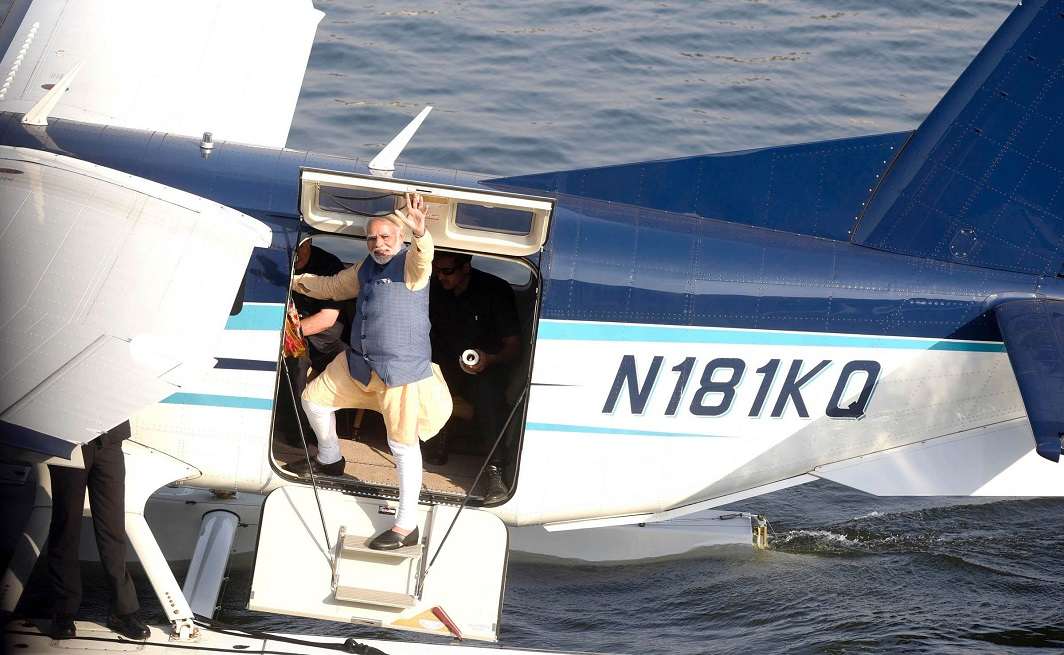 Above: Prime Minister Modi waves to supporters from a seaplane on the Sabarmati

Prime Minister Modi has focussed attention on a little known mode of transport which can be used as a feeder service for commercial planes, for tourism, search operations and firefighting

The sight of Prime Minister Narendra Modi standing on a seaplane on the banks of the Sabarmati river to undertake a short flight to a temple created a stir of sorts. However, few know that this form of transport is not new in India as it has been employed earlier in coastal areas such as Kerala and Car Nicobar, and by the Indian Navy. Also, as recently as 2014, an attempt was made to start a seaplane service connecting Mumbai with a few destinations in the Western Ghats. How­ever, it was ignored by people perhaps due to lack of awareness and proper information.

It was on a fateful day, on December 17, 1903, that the Wright brothers flew the world’s first powered airplane at Kitty Hawk. It was a dream come true for man as the machine flew a few hundred yards before touching down. Meanwhile, a number of aviators were attempting to use water as a surface of operation for take-off and landing.

On March 28, 1910, Frenchman Henri Fabre became the first person to undertake a take-off from water in a powered aircraft, Gnome Omega, thus creating the first successful seaplane. This achievement proved to be a source of inspiration for scores of other aviators around the world.

The word seaplane, incidentally, is used for two categories of flying mach­ines operating from water bodies—the float plane and the flying boat.

A float plane is generally a small aircraft with two floats which look like drop tanks mounted beneath the fuselage (like the one Modi used). Only the floats come in contact with the water. These planes can only operate on calm water, with the height of the waves not exceeding 12 inches. The addition of floats adds to the weight and drag of the aircraft, thus increasing its fuel consumption but lowering its operational speed. This affects the rate of climb and flying performance adversely.

The flying boat, on the other hand, is designed for the job. The fuselage is hydro­dynamically shaped to allow water to flow around its body like the hull of a ship. Flying boats are generally like large cargo aircraft capable of carrying heavier loads over long distances and can operate in rougher sea as compared to small float planes.

The development of flying boats and seaplanes is nothing short of spectacular. These machines soon turned into amphibious craft, ie, operating on land or water as they had wheels in case they had to land on runways. From then on, it was realised that these machines would not only prove themselves as commercial or passenger planes, but could be used by the military for search, rescue and recce operations, military spotting and as fighter interceptors.

By the start of the First World War, most of the leading countries in the fray like Great Britain, France, Germany and Italy had a number of machines taking up the above mentioned roles. For example, the F2, F3 and F5 flying boats were deployed by the Royal Navy for coastal patrol and U-Boat spotting. And on June 4, 1918, three F2As engaged 10 German seaplanes in a dogfight and shot down two of them.

How­ever, the government is planning to make a law to enable use of seaplanes as a new mode of transport, minister Nitin Gadkari more recently told the parliament. Thus one can still hope to see seaplanes ferrying pilgrims to Shirdi and zipping off the coast, loaded with domestic tourists, to­wards Goa in the not-too-distant future.

The period between the two world wars saw overall development in the field of transportation across the Atlantic by a number of companies like the British Supermarine and Short Brothers, the American Curtiss and Boeing, and the German Dorniers. They all made tremendous progress, specially in transatlantic luxury flying. The Pan Am Boeing 314 “Clipper” planes became legendary in this role.

The Second World War also saw a remarkable development of these flying machines in their wartime roles. The credit for the spotting of Battleship Bis­marck goes to a Catalina flying boat from Northern Ireland. The largest and heaviest aircraft built during the Second World War were the two flying boats­—the German BV238 and the 180­-­tonne Hughes H4 Hercules, also nick­named the “Spruce Goose”. Deve­lop­ment continued after the war and by the end of it, the RAF had started expe­rimen­ting with jet-fitted flying boats. By 1947, the Saunders Roe flying boat had emerged as an air defence aircraft.

So the picture of Modi stepping on a small float plane was not a publicity gimmick but was meant to convey that the water resources of the nation were untapped and could be usefully em­ploy­ed. SpiceJet has taken advantage of this resource; it aims to buy many seaplanes to link coastal tourist spots.

The ministry of tourism would perhaps be the biggest gainer in this game as even a prime tourist spot like Agra is reeling under the influx of tourists. These planes can relieve the pressures caused by shortages in aviation infrastructure and allow tourism to thrive and progress in a manner not imagined so far. This would be true of Varanasi, Haridwar, Rishikesh, Allahabad, Nainital, Kashmir and a host of other spots in Kerala and adjacent states. Religious and medical tourism, too, can be brought within the ambit.

From the angle of security, the small float planes would be able to land and take off from smaller water bodies, too. The role of the Coast Guard would also expand and be enhanced with these machines. The surprise element and mobility of seaplanes can be used in the Naxal-infested red corridor as well.

Seaplanes would also be a boost for the Border Security Force which already has a water-based security force called the Water Wing which operates in riverine zones and in the Sunderbans. It also has special Marine Battalions operating in the Sir Creek area. These machines can also be used for firefighting in the hills and jungles of central India after suitable modification as has been done in Canada, Australia and many European countries.

They can also be used to spray water on smoke-filled areas in northern India at the onset of winter. Last, but not least, this mode of transportation can be a feeder service for many airlines in remote areas, bringing them into the national mainstream.

The government must get into the act of procuring the right type of mach­ines and converting small aircraft into 10-to 18-seater float planes. This could be the start of a promising venture.