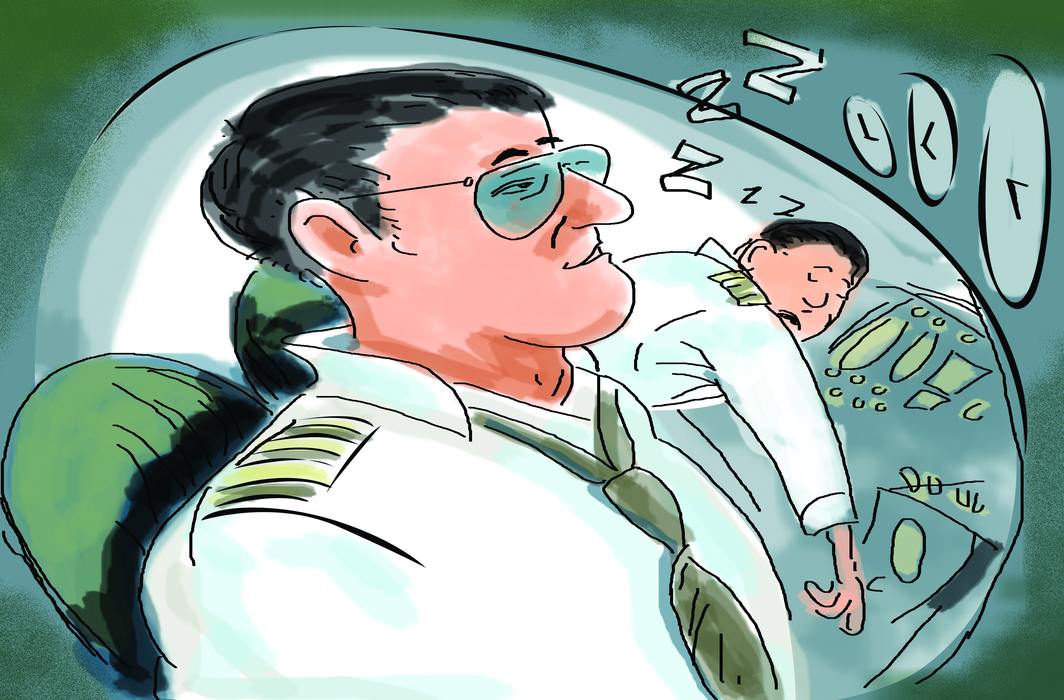 A petition has been filed against a new Civil Aviation Requirements (CAR) which increases the flight timings of aviators and reduces their rest periods. Is this a recipe for disaster and will it jeopardise passenger safety?

“Sleepless in the cockpit” can be the new buzzword for exhausted civilian pilots in India. It is an issue that has exercised the Directorate General of Civil Aviation (DGCA), airlines and pilots for years. And courts have repeatedly pulled up airlines for violating laws which govern flight duty time limitations (FDTL) and rest periods of pilots. The turbulence refuses to die down despite numerous petitions and studies by aviation medicine experts which have said that being alert or sleepy can make all the difference between life and death in the aviation sector.

FDTL was implemented by the DGCA in 2011 after the Air India Express crash in Mangalore (2010) which killed 158 passengers. Pilot fatigue was found to be the cause of it. After this, a government committee under former DGCA head Dr Nasim Zaidi was formed which gave an exhaustive report which scientifically looked into FDTL and rest requirements for flight crew and had aviation medicine specialists from the Indian Air Force. The panel had categorically said: “Sleep and fatigue science has unequivocally established the role of adequate rest in mitigating fatigue.”

Now a petition has been filed in the Karnataka High Court by a 69-year-old Bengaluru resident, Vinod Kumar Vyas, who questioned three specific clauses of the 2019 Civil Aviation Requirements (CAR) of the DGCA concerning rest, duty time and sleep of pilots. These, he claimed, had diluted the earlier 2011 CAR. Following the petition, Karnataka Chief Justice Abhay Shreeniwas Oka and Justice SR Krishna Kumar issued a notice to the ministry of civil aviation and DGCA, which they have to reply to by November 19, 2019.

In a scathing indictment of airlines, the petition alleged: “The CAR 2011 extensively laid down flight time and flight duty period restrictions and guidelines for the operators to follow. As per Rule 44A of the Aircraft Rules, every Airline Operator is required to formulate a ‘Scheme’ on the Flight Duty Time Limitations as per the CAR. Thereafter, the operator is required to get the Scheme approved by the DGCA….With a view to widen the pool of availability of pilots, it appears that the operators prevailed upon the DGCA to modify the CAR, by diluting the regulations relating to flight duty, rest and night operations. It further appears that, without consulting all the stakeholders and without conducting any scientific study, the DGCA has now issued a new Civil Aviation Requirement dated 24/04/2019, which is hereinafter referred to as the CAR 2019.” The new CAR, he said, was in violation of International Civil Aviation Organisation guidelines and the Dr Nasim Zaidi Committee.

Vyas specifically mentioned Clause 13 and 16 in the 2019 CAR. Clause 13, which deals with Consecutive Night Operation, says: “Flight crew shall neither be detailed nor undertake any flight duty between periods embracing 0000 to 0500 hrs local time for more than two consecutive nights except once within a period of 168 hours.” Between 12 midnight and 5 am is the period of circadian low when the alertness of an individual is at its lowest. But this new Clause allows airlines to put pilots on two consecutive nights of flight operations. However, the 2011 CAR had barred airlines from doing so.

Clause 16 deals with Unforeseen Operational Circumstances and this, too, was changed. From the existing maximum flight time of three hours and flight duty period of six hours over 30 days, CAR 2019 has increased it to a maximum flight time of 4.5 hours and flight duty period to 9 hours over 28 days. “This,” Vyas said, was “bound to add to the fatigue, exponentially, of the crew members and contribute to various hazards.”

He also asked the Court to direct DGCA to implement the recommendations of the Nasim Zaidi Committee. This panel had given an allowance of 30 minutes to pilots for post-flight duties such as parking, doing checklists, interacting with engineers, customs and immigration checks. It said this time should be included in “flight duty time”. However, CAR 2019 (Clause 4.1.2) has left this to the discretion of the operator/airline. Vyas said: “Any reduction in the standard allowance towards the post flight duty would eat into the ‘rest’ period of the pilots.” He urged the Court to quash these Clauses as they were “arbitrary and unreasonable”.

Vyas brought the Court’s notice to various disasters which took place due to pilot fatigue. The Mangalore one is an apt example. But airlines have ignored these guidelines, jeopardising the lives of their own personnel and passengers in the pursuit of profit, he said.

When India Legal contacted Arun Kumar, the Director General of Civil Aviation, he said: “I cannot comment on this matter as it is sub judice. We will reply to the notice sent to us by the Karnataka High Court and submit our reasons to it.”

An aviation medicine expert of repute told India Legal: “All three points raised by the petitioner are valid observations and in the interest of flight safety. Their dilution in favour of the operators/airlines appears arbitrary and unfounded. These changes appear to have been made to overcome operational difficulties without a full appreciation of the possible implications.

“My advice to operators and airline managements would be to ensure the continued good health and fitness of their flight crew. By not diluting FDTL they will succeed in not only creating a happy and healthy environment in this crucial HR segment, but seriously reduce chances of flight crew impairment and therefore minimise incidents and accidents attributable to human error.”

A senior commander told India Legal that it would be in the fitness of things if airlines could roster pilots for one continuous shift of a week or a month so that the body gets acclimatised to various timings.

Arvind Kamath, the senior counsel representing Vyas, told India Legal: “My client lost his brother-in-law in 1993 in an air crash in Bengaluru. Ever since, he has followed DGCA’s safety regulations. He wants to know if any scientific study has been done by the DGCA before these clauses were changed. The DGCA is not an expert body; the Zaidi panel was.” Kamath said the main motive of any airline is to make profits and the DGCA should protect the pilots who have no representation there. “Their rest period should not be tinkered with. Vyas wants these clauses quashed. With India expected to be the third largest aviation market, safety has to be paramount.”

Courts have earlier too pulled up airlines over this matter. In April 2018, the Delhi High Court responded to a petition filed by lawyer Yeshwanth Shenoy and came down heavily on the DGCA and airlines for violating FDTL norms.  The DGCA was given a year to correct this. It later gave guidelines which mandated strict rest periods. But airline operators protested, saying this would cause commercial loss.  The DGCA then allowed airlines to make their own risk assessment and rules. Affidavits were filed asking why this was allowed. But in November 2018, the DGCA recommended new changes. Pilot unions protested but to no avail.

DGCA’s tough stand towards pilots was seen in 2016 also when it cracked down on those reporting sick. It came out with a draft CAR which seemed to bat for airlines. It said: “Patterns have been observed wherein pilots rostered for flights report sick….This is a highly undesirable practice and goes against the public interest.” It said such an action could attract the provisions of sub-rule (2) of rule 39A of the Aircraft Rules, 1937, which reads: “The Central Government may debar a person permanently or temporarily from holding any license or rating mentioned in rule 38 if in its opinion it is necessary to do so in the public interest.” It further added: “Airlines publish planned flight roster for pilots on periodic basis….However, due to the dynamic nature of flight operations, such planned roster undergoes change at regular intervals. Pilots shall undertake the flight duties as per the dynamic roster as long as they are within the FDTL norms.” This too became a bone of contention with pilot unions issuing a legal notice to DGCA.

With airlines on a fast-expansion spree, pilots are being flogged like never before. But at what cost? It is the lives of passengers that are at risk.

A Maharaja with No Suitor...